The global age bomb that's about to change everything

The workforce is shrinking. And we're just now seeing the scale of the economic shock that’s coming. 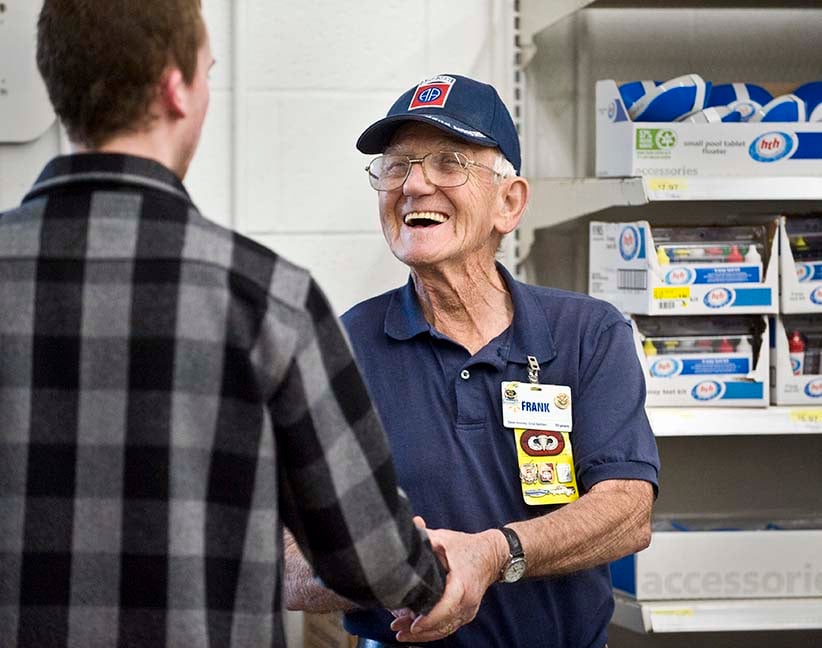 Frank Brincho greets a customer at the Wal-Mart store in Foothill Ranch. Brincho has been a greeter at the store for 10 years and will celebrate his 94th birthday on February 13, 2011. (Paul Bersebach/The Orange County Register/Corbis)

It’s not often the Occupy movement can find hope for its cause in a research report from a major multinational investment bank. But an important new paper from Morgan Stanley, co-written by former Bank of England chief economist Charles Goodhart, should tickle the fancy of the anti-corporate, global-inequality crowd. The report argues that several of the big demographic themes that shaped the global economy over the last 30 years are set to reverse course in dramatic fashion. The world is at a “sharp inflexion point,” the authors write. “Just as a larger labour force pushed real wages lower and inequality much higher in advanced economies, a smaller labour force will inevitably lead to rising wages, a larger share of income for labour and a decline in inequality.”

What’s there for a Marxist not to love? What Morgan Stanley is heralding is the end of cheap—cheap goods, cheap labour, cheap money. And it’s all a result of a shrinking labour force, which is the result—you guessed it—of an aging population. In the West, most people are well aware that the workforce is growing older. But where the paper’s authors stand apart is in describing the scale of the economic shock that’s coming.

To understand this, it helps to first appreciate how rare and unusual the “demographic sweet spot” is that we’ve just lived through. It began with the surge of Boomers who entered the workforce in the 1970s. But those workers were then joined in the global economy by armies of workers in Eastern Europe, following the collapse of the Soviet Union, and then in China. All told, the world’s labour force has doubled since 1990. Everything that we’ve come to understand about the modern economy—low inflation, declining interest rates, immense corporate profits, rapid wealth accumulation by the rich and downward pressure on wages—stems from that shock labour infusion, and all of it stands to change.

How so? In several ways. The aging population in developed nations is the obvious one. But what we see in the West is likely to be multiplied several times over when it comes to China—as is the case with everything to do with that country. Developed nations don’t have a monopoly on grey hair, and China’s working-age population is already declining by nearly four million people annually (that’s as if everyone in Toronto and Montreal left the job market each and every year), courtesy of its one-child policy. That, along with rising living standards, is driving up wages there; labour costs in some parts of China are now on par with the U.S.

And if you think we’re in for a worldwide era of stagnation and deflation similar to what Japan went through with its creaking population, guess again, Goodhart argues. In China, retirees will start to draw down on their stockpile of savings—a glut of money that has suppressed interest rates around the world—while higher health care costs in the West will force governments to raise taxes. With an already shrinking workforce, that will give workers added bargaining power to demand higher pay, which in turn will get passed on to consumers in the form of higher prices. Companies will be forced to put their cash hoards to work to improve productivity. And because the era of excess global savings—which helped to push down real interest rates—is about to end, central banks will be able to finally raise rates. Cheap money has been a major driver of stock markets, but the gains from financial assets have historically flowed disproportionately to the wealthy. Coupled with rising wages for ordinary workers, Goodhart argues, the inequality that has caused so much panic is likely to reverse.

The upheaval Goodhart spells out is so sweeping and, at times, so specific, that any number of things could change.

But it’s also important to remember there are only two ways for an economy to grow: Either the number of people has to increase, particularly those of working age, or they have to become more productive.

Putting aside the impact of technology and productivity, which is impossible to predict (robot offices, anyone?), we have long known that in a world where labour is scarce, the greatest spoils will go to those regions and countries that can steal away prime working-age people from other countries, and that, historically, has been America’s (and Canada’s) greatest economic advantage.

Even if immigration can’t fill the coming labour gap, as the paper argues, it will still be crucial to long-term growth.

That’s why it’s particularly alarming to have this report land at a time when that advantage is under attack in the U.S. Donald Trump’s anti-immigration policy, which ranges from deporting millions of undocumented immigrants to a “pause” in the issuing of all green cards, has proved disappointingly popular and doesn’t bode well for what’s to come.

However this all plays out, Goodhart’s paper is a wake-up call. As much as we might think we know the aging-population narrative, we haven’t seen anything yet.