The professor of economics at Columbia University discusses the failure of austerity, the rise of inequality, and the weakness of the U.S. economic recovery 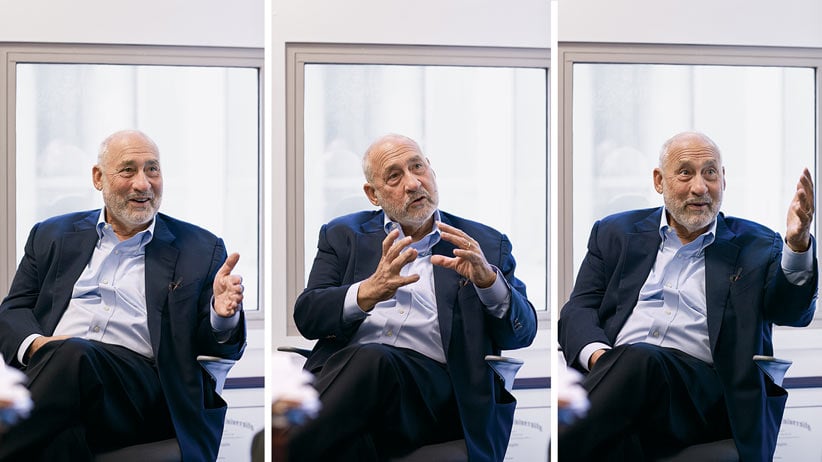 Nobel laureate Joseph Stiglitz, a professor of economics at Columbia University, has written extensively about inequality in America, including his latest book, The Great Divide: Unequal Societies and What We Can Do About Them. He’ll be a visiting scholar in the new Lind Initiative U.S. Studies at the University of British Columbia this fall.

Q: We’ve seen signs of recovery in the U.S. economy. Does the recent stock market turmoil threaten that?

A: First, I’d say it’s not a strong recovery. The crisis was 2008, we’re now in 2015—almost eight years later and the gap between where we would have been and where we are is huge and not closing. The implied unemployment rate is very high, labour force participation is very low, and the increase in wages in the second quarter was the lowest in 25 years. Before this turmoil, the U.S. economy was in better shape than Europe or Canada, but not strong. This will almost surely make things worse.

A: The median family income in the U.S. is lower than it was a quarter-century ago, and if people don’t have income, they can’t [consume], and you can’t have a strong economy. We had assumed it was the emerging markets that would keep the global economy going. And what’s clear is that’s not true. There’s significant risk—actually it’s no longer a risk—a significant likelihood of a marked slowdown not only in China, but also in a lot of other countries [like] Brazil, which is in recession. All of the other countries that depend on commodities, including Canada, are facing difficulties. So it’s hard to see a story of a strong U.S. economy.

Q: You’ll be lecturing at UBC on global inequality. Why should people be worried about inequality?

A: Inequality is very related to the problems we’re talking about. People at the top spend less money than those at the bottom so when you have redistribution toward the top, aggregate demand goes down. Unless you intervene, you’re going to have a weak economy unless something else happens. That something else could be a bubble. The United States tried a tech bubble and a housing bubble, but those were not sustainable answers. So I view inequality as a fundamental part of our macroeconomic weakness. There have always been two theories about inequality. One is that it reflects just deserts. The other is that there are large elements of exploitation and inequality of opportunities. The evidence is overwhelmingly that the increase in inequality is associated with those negative factors. If it were all social contribution, then when the top did better, they would be contributing to everybody’s well-being. That trickle-down hasn’t happened. We’ve seen median income, people in the middle, actually worse off than they were 25 years ago.

Q: You’ve said that inequality is fraying the bonds that hold the U.S. together. That sounds scary. Is it that bad?

A: Oh, I think it is. [It’s behind] a lot of what you see as dysfunctional behaviour and extremism. Particularly, young men are angry. You know, how can people like Donald Trump be so politically successful, running ahead in the Republican primary with no policy other than a sense of anger? What he’s been doing is pointing out the corruption in our system. I mean, Jeb Bush has Florida put $250 million of pension funds into Lehman Brothers and then when he leaves as governor he gets a job at Lehman at a salary of $1.3 million—those things resonate with Americans. The system looks broken.

What I argued in The Great Divide is that societies can’t function without trust, both politically and economically. And in the context of politics, what you see increasingly is young people not voting. The voter turnout in the last election was the lowest it’s been since the Second World War, when a lot of people were off fighting. In 2010, voter turnout among young people was 20 per cent. Americans like to say we’re fighting for democracy, and yet young Americans have come to the view that democracy doesn’t deliver.

A: Very much so. You see Hillary Clinton has emphasized it in her campaign, but even the Republicans have said inequality is the major issue. To me that’s one of the optimistic things, that it’s finally moved to the top of a political agenda. The other optimistic note is that you see, across the country, 70 per cent support for increasing the minimum wage. Congress can’t get it through because it’s dysfunctional and so we’re having strong grassroots movements to raise it, in Seattle, Los Angeles, New York. The grassroots people are saying our national government is broken; we have to do something about it.

Q: What still needs to change?

A: For the United States, our political system is clearly distorted. We have gerrymandering so that there [is a situation where] a million more voters [who] vote for Democrats, [yet] the House is controlled by the Republicans. So clearly, the way our Congress operates is important. The other big issue is the influence of money in politics. It’s not only campaign contributions. People like Trump—either you become very dependent on your benefactors or you are very rich.

Q: What about Canada? Do you think we have an inequality problem?

A: Oh, yes, clearly. But it’s in the middle of the OECD pack. It’s not as good as the Scandinavian countries. It’s not been doing as good a job as it did in the past in taking inequality of market income and reducing it. Also, you are a natural resource economy, and natural resource economies, with a couple of exceptions, tend to be very unequal. You can, in principle, tax the natural resource rents at very high rates and use that to create a more equal society. The country that’s been most successful at that is Norway. The more typical countries are those in the Middle East where a small group seizes those resources, uses it to buy arms to make sure that they can oppress the remainder, and you get these great inequalities. So Canada is among the better performing of the natural resource economies, but it’s still not up to the best performing.

Q: In Canada the share of income going to the rich has been falling for several years. We have better social mobility than in the U.S. Why is Canada better on inequality?

A: You have a more egalitarian education system, and I think your health care system is so much better than ours. A third aspect
that clearly is part of American history is our racial issue. But the problems of inequality are even within the white group. Twenty per cent of American children grow up in poverty, and that means they get inadequate nutrition, inadequate health care, and because we have a very local education system, they get inadequate access to education. With those as a starting base, you perpetuate inequality. That’s why, here in New York, Mayor de Blasio has made a big deal of trying to focus on preschool education, because by five years old, there are already huge differences. We’ve finally begun to recognize it.

Q: We’re in the middle of an election in Canada that’s about tax cuts and austerity versus higher benefits and increased spending—deficits versus no deficits. How would you make the argument to the Canadian electorate that they should favour looser fiscal policy?

A: There is a long-standing, strong argument for what is called a balanced budget multiplier—if the government increases taxes at the very top and increases spending on infrastructure, education, technology, it stimulates the economy. Over the long term that reduces the deficit because higher growth means more revenue. Beyond that, the theories of austerity have been totally discredited. The IMF, which is not exactly left wing, has repeatedly said austerity is contractionary. There isn’t any body of economic research that supports the Harper [government] view.

Q: Yet Canadians are extremely nervous about deficits given what we went through in the 1990s. Is there not a limit to how much governments can borrow?

A: The answer depends on what you spend the money on. If you spend it on investments, your balance sheet is strengthened. If you spend it on wars—the Iraq war cost us $3 trillion—you don’t have anything to show for it. But because I was aware of this somewhat irrational excessive sensitivity [to deficits in Canada], what I said is if you raise your taxes and increase your spending in tandem, so not increasing the deficit, that stimulates the economy. If you are paranoid about deﬁcits, that’s the minimal thing you do.

I think you can withstand a substantial increase in debt if you spend the money well. The argument that if the debt-to-GDP ratio got over 90 per cent [then] growth would slow down has been totally discredited. And the example that makes it so clear, the United States ended the Second World War with 130 per cent debt-to-GDP ratio. That debt was accumulated by war, so we had nothing to show for it other than, obviously, an important victory, but not in terms of our economic infrastructure. And yet, the period after that was the fastest period of our economic growth.