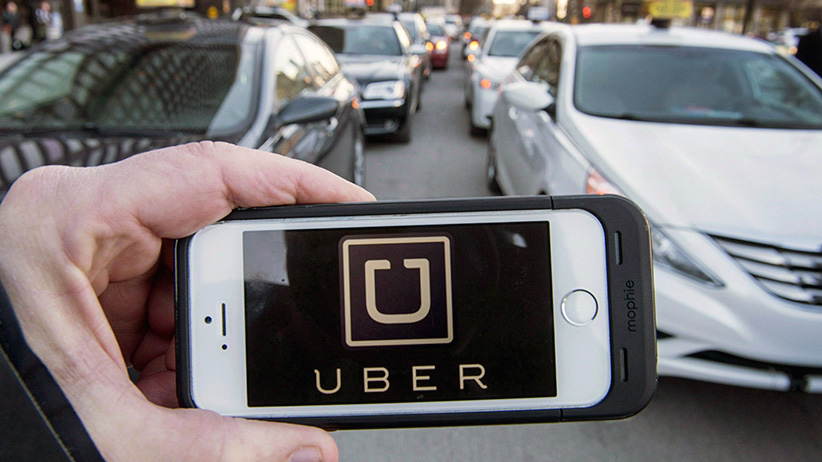 The Uber logo is seen in front of protesting taxi drivers at the Montreal courthouse, on February 2, 2016. Calgary city council has passed a bylaw that would allow for the operation of ride-sharing companies, but officials with Uber say the rules are too strict. (Ryan Remiorz/CP)

Protests on Parliament Hill, violence in the streets of Toronto, police protecting Edmonton’s local government, and desperate calls for a truce from Montreal’s mayor. Are these protests over an imminent war? Or a gross violation of human rights? No. It’s Uber.

The rapid growth of ride-sharing technologies is forcing fundamental changes upon an old industry. And change is never easy. For a group traditionally protected from competition, it is particularly hard. Only a limited number of cabs are allowed on the streets, and these licences can cost tens or even hundreds of thousands of dollars. Little wonder the industry is on edge.

Local governments are also having a tough time. Scrambling to keep up with changing technologies, all while balancing intense pressure from the taxi lobby with the broader public interest.

Gradually, some cities are making progress. As more cities reform their rules, it’s important for us to know good bylaws from bad. But what makes for a good bylaw? Two recent examples provide a great opportunity to explore this question.

In January, Edmonton became the first Canadian city to formally sanction ride-sharing technologies. They will charge Uber (the corporation, not the drivers) a $70,000 annual fee ($20,000 of which will fund accessible taxi vehicles) and charge drivers $0.06 per trip. Importantly, there is no limit to the number of vehicles and only a $3.25 minimum price per trip. Operators must have a good-enough driver’s licence, have vehicles inspected, and get proper insurance.

One month later, and three hours south, Calgary also allowed the service. But it did so with different rules. Unlike Edmonton’s per-trip fee, Calgary will charge Uber drivers $220 per year and no per-trip fee. (There are also more stringent requirements regarding driver’s licence, inspection, and background screening. See a comparison here. For now, I’ll focus on the fees.)

These differences were enough for Uber to declare it “will not relaunch its operations in Calgary at this time.” $220 per year plus a more costly annual inspection, instead of $0.06 per trip and a simple inspection, seems to be the straw that broke Uber’s back.

Their point has merit. There’s an important difference between fixed and marginal costs. Or, more simply, between fees per driver and fees per trip. Let’s see how, by looking at two critical facts. (For what follows, I’ll rely on some recent research by some top-notch economists, Judd Cramer, Alan Krueger, and Jonathan Hall. See the papers here and here.)

Not only are most drivers part-time and casual workers, they have extremely flexible schedules and change their work hours substantially from one week to the next. The researchers found only 17 per cent of Uber drivers worked similar hours (within 10 per cent) from week to week. Over 40 per cent of drivers worked either 50 per cent more or 50 per cent fewer hours between weeks. That’s huge volatility.

Fact 2: The importance of fixed-costs depends on the number of hours worked.

Fixed costs per driver—such as in Calgary—penalize drivers that work only a few hours. To illustrate, consider the following example. The average Uber driver does 1.5 trips per hour and roughly earns about $20 per hour (both consistent with data from Hall and Krueger, 2015). Working five hours per week, for example, will bring in $5,200 per year. Subtract the $220 fee, and a further $250 for an annual vehicle inspection (a rough estimate), and you’ve averaged about $18.19 per hour over the year. Work more, and the fees are spread over more hours and average earnings go up. I illustrate this below. 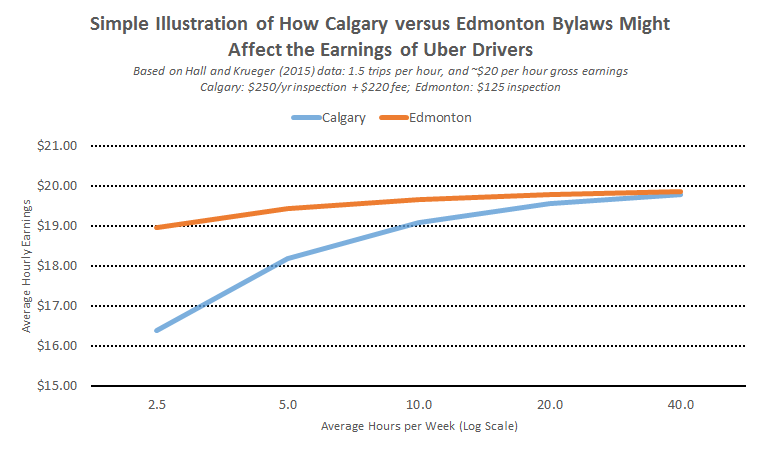 Next, consider Edmonton. The same driver would only pay for the annual inspection, though a cheaper and simpler one (and one that Uber already conducts at places like Canadian Tire). Let’s assume it’s half the cost of the inspection Calgary requires. Finally, for the Edmonton driver, there is no annual fee but instead a $0.06 per trip fee. All in, over the same year and assuming the same number of hours and trips, this driver would earn $19.43 per hour—or about seven per cent more than the Calgary driver. I illustrate other scenarios in the above graph. Calgary is clearly worse for casual drivers.

Perhaps not a huge deal, though it gets progressively tougher for the Calgary driver as work hours fall. It also penalizes those who are unsure and want to try it out first. A driver that works five hours a week for only a month will not break even.

These two examples provide broad lessons for other Canadian cities. Fixed costs penalize flexible and casual work schedules, which is a work arrangement at the core of ride-sharing technologies. Per-trip fees (marginal costs) are therefore better. (Aside: To his credit, Calgary Mayor Naheed Nenshi seems to understand all this. Future reforms may improve things in Calgary.)

Why should we care if one set of bylaws is more or less favorable to ride-sharing services? There are many benefits from the new technology.

We all know that Uber is cheaper than taxis. This clever article estimates the average cost savings of using Uber across a number of Canadian cities. Typically, Uber is one-half to two-thirds cheaper than taxis—that’s a 30 to 50 per cent sale on urban transportation!

But it’s not just savings for customers, it’s potentially more earnings for drivers. In the six cities investigated by the researchers cited earlier, average hourly earnings for Uber drivers exceed those of taxi drivers. Not surprising to an economist: the technology more efficiently matches drivers with passengers, providing gains for both.

(Quick aside: the authors lacked data on trip length, so could not subtract costs from the Uber earnings. Here’s a rough back-of-the-envelope calculation. The average hourly earnings gap is about $8 across the six cities. Now, assume $0.25 per km in gas and wear-and-tear costs. Based on this, an average trip is almost nine kilometres. With 1.5 trips per hour, a reasonable per-hour cost estimate is less than $3.50. So, some of the gap is costs, but net earnings still are probably higher driving for Uber than for a taxi.)

There are also non-monetary benefits. From Cramer and Krueger (2015), the fraction of time an Uber vehicle had a passenger in it was substantially higher than for taxis. This (potentially) means less congestion and less idling, saving time and helping the environment. This follows from the improved technology matching drivers with passengers, and also easily explains the higher earnings for drivers. 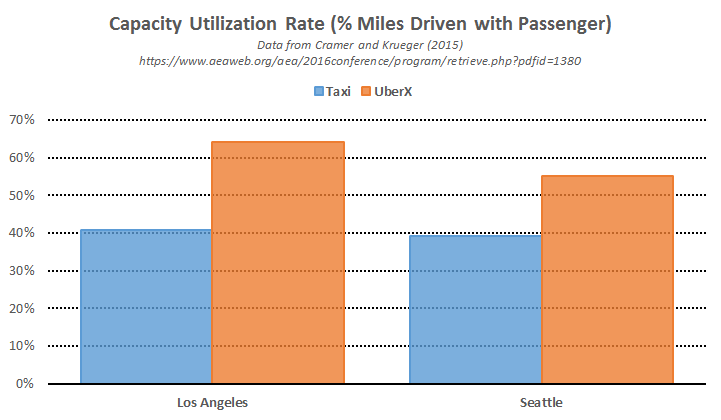 Of course, I’m just highlighting the benefits. New technologies always create challenges. There are inevitably winners and losers, and sometimes the losses can fall disproportionately on a small number of people. (Ask these guys.) The losers from ride-sharing technologies are likely the owners of the taxi medallions rather than the drivers. If we want to help those individuals, the solution is not to block new technology but to compensate them or help them adjust.

Local governments across the country will continue to debate reforms. As those debates proceed, keep in mind the key differences between taxis and ride-sharing services. Flexible rules with low fixed costs seem particularly important. Background checks, vehicle inspections, proper licence and insurance requirements are all reasonable—to a point. Too costly and they discourage the service in the same way as fixed costs.

Of course, none of this is about Uber specifically. It’s about allowing a more innovative industry to rise. Policy-makers should facilitate new technology, even if it disrupts existing operations. Edmonton has raised the bar for the whole country; let’s see who follows.