Has the next U.S. recession already arrived?

He predicted that oil would fall to $25—two years ago. Now, financial analyst Bob Hoye believes the next U.S. recession is already here 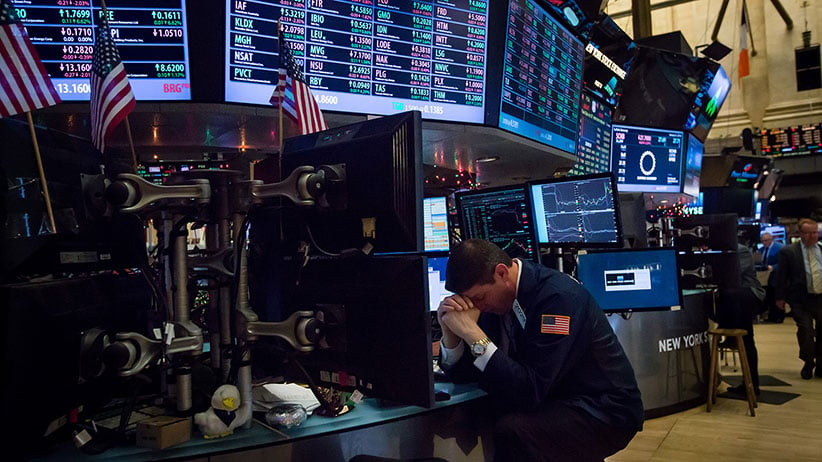 You hear a lot of people say no one could have seen the crash in oil prices coming—and certainly not to the incredible lows the oil patch is currently suffering through. Well, let me reintroduce you to Bob Hoye. Back in February 2014 I wrote a column about a forecast by the Vancouver-based financial analyst that, to many at the time, seemed utterly preposterous. Based on the surge in oil production in the U.S. and the irrational exuberance of speculative oil traders, Hoye predicted that crude prices would top out “somewhere in the next couple of months.” He then went on to warn that “crude oil could fall to 25 per cent of its recent high. It will change things enormously.” Based on prices at the time, this translated into a forecast for US$25 oil.

And now? Oil is a pocketful of change away from reaching that low point. And whooee, have things ever changed. So when Hoye’s latest missive landed in my inbox this week, I couldn’t help but shudder at the headline: “When did the present [U.S.] recession start?”

It’s not that Hoye sees another recession looming in America’s future. He believes it is already here. It’s simply that the National Bureau of Economic Research (NBER), the body tasked with dating business cycles in the U.S., has yet to acknowledge it. (As Hoye notes, it often takes up to a year after a recession starts before the NBER recognizes it as such.) At this point, the most recent reading of U.S. growth dates to third-quarter GDP, which was revised downward slightly in December from 2.1 to two per cent. If Hoye is right, when the numbers for the fourth quarter are released later this month, they’ll show the economy actually shrank at the end of 2015.

It doesn’t have to be said that Canada really, really, really needs its neighbour to flourish right now. Having lost our economic engine when the bottom fell out of Alberta’s oil patch, we’ve hitched ourselves to a resurgent America. You all know the play by now. As the loonie falls—driven down by plunging oil and Bank of Canada interest-rate cuts—Canadian goods and services will get cheaper for Americans, who’ll duly oblige by buying our stuff.

But what if America doesn’t come through? What if the next U.S. recession, as Hoye argues, is here? The first thing we should understand is that another U.S. downturn is inevitable. The only question is when. In the post-Second World War era, recessions have grown rarer, but America has still endured 11 of them over that time, according to the NBER. In fact, between 1945 and 2009 the average expansion phase of the economy—meaning the time between the trough of one recession and the peak before the next one—lasted 58.4 months. As of right now, the U.S. economy has expanded for 79 months.

One of the key indicators Hoye points to in his recession forecast is the collapse in U.S. industrial production—a broad measure of the output of manufacturers, utilities and mines—that has contracted for the last three straight months on a year-over-year basis. 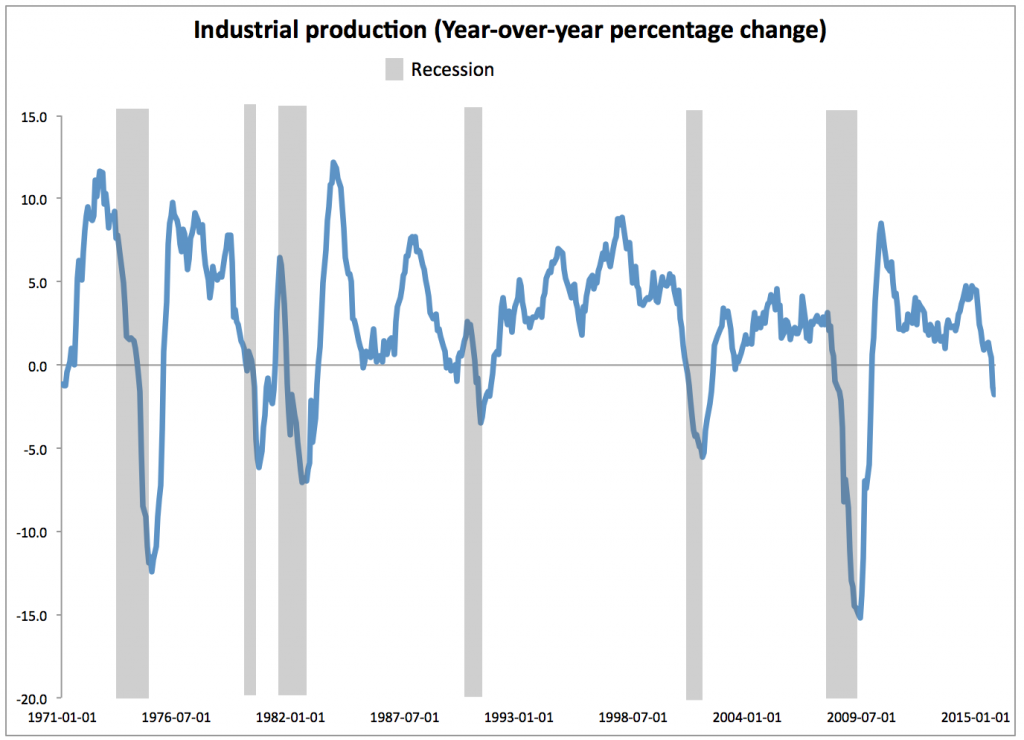 “Industrial production is less of the equation than it used to be, but that’s a devastating thing when it goes below zero,” says Hoye. Over the last six decades, when that has happened, a recession has invariably occurred. He also sees worrying signs in the plunging prices for lower-grade bonds: he believes a credit contraction is under way.

Hoye isn’t the only one uttering the R-word. Others have pointed to a slowdown in domestic demand, signs that U.S. consumers are retrenching or that employment growth is faltering. But the other big factor feeding widely into recession fears is the collapse in U.S. stocks.

Of course, if it were simply a matter of reading the tea leaves of the stock market, America’s economy would have gone through a roller coaster of booms and busts. Including the rout we’re going through now, there have been three Wile E. Coyote moments for U.S. stock since 2010 in which the market plunged by double-digits. Hence the old joke that the stock market has predicted nine of the last five recessions.

But recessions don’t happen without accompanying stock corrections either. And this stock-market upheaval seems different from those other pauses of the last five years, which were followed by rebounds within a matter of months and then much higher prices. Instead, after moving sideways through 2015, the S&P 500 has now fallen back to where it was in October 2014 (not including dividends). To find another stretch where U.S. stocks performed poorly to this extent and for this long, a look at the index’s history shows, you have to go back to January 2008. Ten months later the NBER would confirm that the Great Recession had started in December 2007.

A recession in the U.S. is by no means written in stone, and Hoye might be proven wrong this time. But there’s no denying that the American economy is stumbling—right when Canada needs it most.