This is the refugee debate we ought to be having

Is our chance to help those in desperate need also a potentially historic economic opportunity? 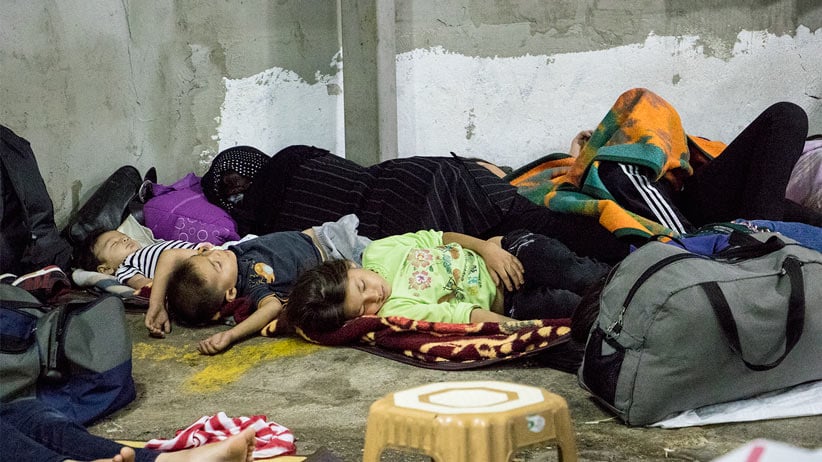 A Syrian refugee family sleeping in the Turkish resort town of Bodrum. The recent drowning of a group of Syrians, including 3-year old Aylan Kurdi, has highlighted the deepening refugee crisis as tens of thousands of Syrians, North Africans, Pakistanis, and Afghans, among others, attempt to make the treacherous sea journey to Greece. (Photograph by Adnan R. Khan)

Dieter Zetsche surprised attendees of the Frankfurt auto show recently when he interrupted a presentation to opine on the 800,000 Syrian refugees that are expected to flood into Germany this year. The mustachioed chairman of Daimler AG, which makes Mercedes luxury cars, suggested the influx of asylum seekers could “help foster another economic miracle” by offsetting the challenges posed by the country’s rapidly aging population. Zetsche went on to say the carmaker would help pay for housing for migrants in Stuttgart, while rival Volkswagen, not to be outdone, said it would find them trainee jobs.

In Canada, by contrast, politicians have failed to draw a similar link between accepting large numbers of Syrian refugees and the potential for future economic growth, despite being in the midst of a federal election where economic matters are said to be top of mind among voters.

Instead, the debate is focused narrowly on the need to balance humanitarian assistance with national security concerns—not that the number being talked about would have much of an economic impact anyway. The Harper government’s promise to take another look at its policy, following significant public outcry, only resulted in a commitment to speed up by 15 months the resettlement of 10,000 Syrians, not accept more of them. Meanwhile, Tom Mulcair’s NDP has proposed bringing 10,000 refugees into the country by the end of this year, while Justin Trudeau’s Liberals have promised to bring in 25,000 by January.

It all raises an obvious question: Are we not only missing out on the chance to help those in desperate need, but a historic economic opportunity, too?

Canada, after all, is facing many of the same demographic challenges as Germany, although to a lesser degree (by some estimates, Germany’s population is expected to shrink to 68 million by 2060, compared to 80 million today). With Baby Boomers now entering their retirement years en masse, there are now far more Canadians set to leave the workforce than there are young people entering the job market to replace them. That, in turn, has all sorts of implications for pension plans, Old Age Security and health care funding when coupled with the fact that Canadians, on average, are now living much longer than they used to. Statistics Canada estimates there could be as few as 2.2 working-age Canadians to support each senior citizen by 2056, compared to a 5:1 ratio back in 2006 and an 8:1 ratio in the third quarter of the 20th century.

Yet, while the problems posed by an aging population are well understood, the capacity of Canada’s current immigration policy to offer a meaningful solution is frequently oversold. At the recent federal leaders’ debates in Calgary, Prime Minister Stephen Harper touted his government’s approach as best-in-class: “This is the first government in Canadian history that, faced with a recession, did not cut our immigration. The reason we didn’t cut our immigration is because we understand, given the demographic and economic pressures in front of us, that a long-term, large-scale immigration program is in this country’s interest.”

But Canada’s current policy of admitting roughly 250,000 new immigrants a year through all streams, though comparatively generous on a per capita basis, doesn’t do much to give the country of 35 million a more youthful appearance. A 2006 study by the C.D. Howe Institute found that, under the current system, Canada would need bring in as many as 2.6 million new immigrants a year through 2020 in order to help stabilize Canada’s old-age dependency ratio at 20 per cent. “The math pretty much speaks for itself,” says Stephen Gordon, an economist at Université Laval, who created a chart a few years ago that highlights the enormity of the challenge. 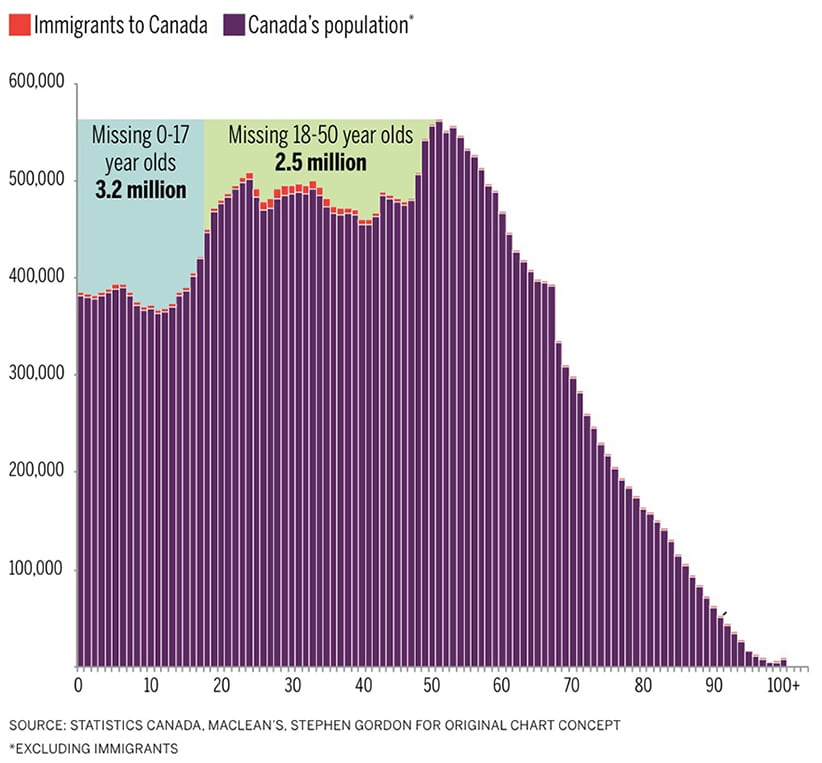 Yet, even such a Herculean effort wouldn’t permanently fix the problem. Why? “Immigrants get older, too,” points out Ravi Pendakur, a professor in the graduate school of public and international affairs at the University of Ottawa. Indeed, the same C.D. Howe study suggested that, after a brief pullback, Canada’s immigration levels by 2050 would need to be boosted to around seven million newcomers a year to keep the ratio of senior citizens to working age people constant, all while the country’s overall population would have ballooned to 165 million.

There are, nevertheless, short-term advantages to accepting large numbers of mostly young migrants over a period of a few years. A recent study by Oxford Economics estimated that the addition of more than one million refugees into Germany over the next three years could boost GDP by as much as 0.6 per cent, while going a long way toward addressing the country’s current shortage of skilled workers. It’s happened before: Germany’s postwar recovery was underpinned by a surge of immigration from other parts of Europe.

Related: Our in-depth primer on refugees and where the parties stand

Of course, Germany is better equipped than most to accept large numbers of newcomers who don’t necessarily possess the right qualifications for its export-oriented economy. Its unemployment rate of 6.4 per cent is among the lowest in the EU and the country’s unique education system is geared toward training workers to participate in its vast manufacturing sector—often with the direct participation of employers themselves. VW, for example, is investigating the possibility of sponsoring language courses and job training for refugees in Germany and Sweden. “A lot of highly qualified people are coming over,” Martin Winterkorn, the CEO of Volkswagen AG, told Bloomberg News. “That’s an opportunity to use these highly skilled people to give them jobs at our sites and plants. And we see opportunities to train other refugees who aren’t as skilled.”

This is an area where Canada could clearly do a better job. Employers often don’t recognize foreign credentials and many new immigrants initially struggle to get a toehold in the job market—particularly those who arrive as refugees.

Yet, at the same time, it hardly makes sense to turn away desperate asylum-seekers while Canadian employers attempt to bring in tens of thousands of temporary workers annually to fill both skilled and unskilled positions, as some academics have pointed out.

Put another way, if Dieter Zetsche can figure out how to use fleeing Syrians to stamp out its well-appointed Mercedes sedans and SUVs, there’s no reason Canadian CEOs—Mercedes’ target market—shouldn’t be able to accomplish a similar feat.