Three big things economists were watching in the debate

Policy wonks were likely disappointed by last night’s Ontario leaders’ debate. I know that I was. Too often in the debate, the leaders would give laundry lists of policies and priorities, without giving the viewer enough details or time to be able to follow the conversation. But if you dig deeper into the debate, a few important policy themes emerged. Here are three that caught my eye.

Outside of one discussion of “dead money,” I was surprised that neither NDP Leader Andrea Horwath or Premier Kathleen Wynne seriously challenged PC Leader Tim Hudak’s tax-cut claims by suggesting that money would go to “big corporations” rather than “Ontario families.” It is for the best that neither leader did since, in small open economies such as Ontario’s, corporate taxes are largely paid for by workers through lower wages.

Hudak has not received enough credit for deciding to cut corporate taxes instead of cutting a more reviled tax such as the HST (though the logic of cutting taxes at all when the deficit is so high is questionable). While other tax cuts may be more progressive, a corporate tax cut is likely to provide the biggest bang for the buck in productivity increases. It is strange, however, to see corporate tax cuts being touted as a job creation strategy, as the benefits of higher productivity are mostly higher wages and profits, not increased employment. At best, increased employment is a small side effect of a corporate tax cut. Or, as economist Nick Rowe would put it, “most economic policies aren’t about jobs.”

At one point in the debate, Wynne defended her government’s spending record by stating that the Ontario government’s per capita program spending was the lowest of any province in the country, to which a surprised Tim Hudak responded, “fair enough.” Program spending by province is presented in the chart below, taken from Budget 2014 (Chart 1.15), which shows Ontario’s expenditure of $8,453 per capita as being the lowest in Canada. The province also has the lowest per capita revenues, at $8,369, partly due to relatively low levels of transfers from the federal government. It is unusual that Wynne has not mentioned these facts more often, as I believe most Canadians believe Ontario is a relatively high-spending province when it comes to health and education. All three parties have all framed the deficit issue as largely being an expenditure problem, despite a lack of evidence to support that position. 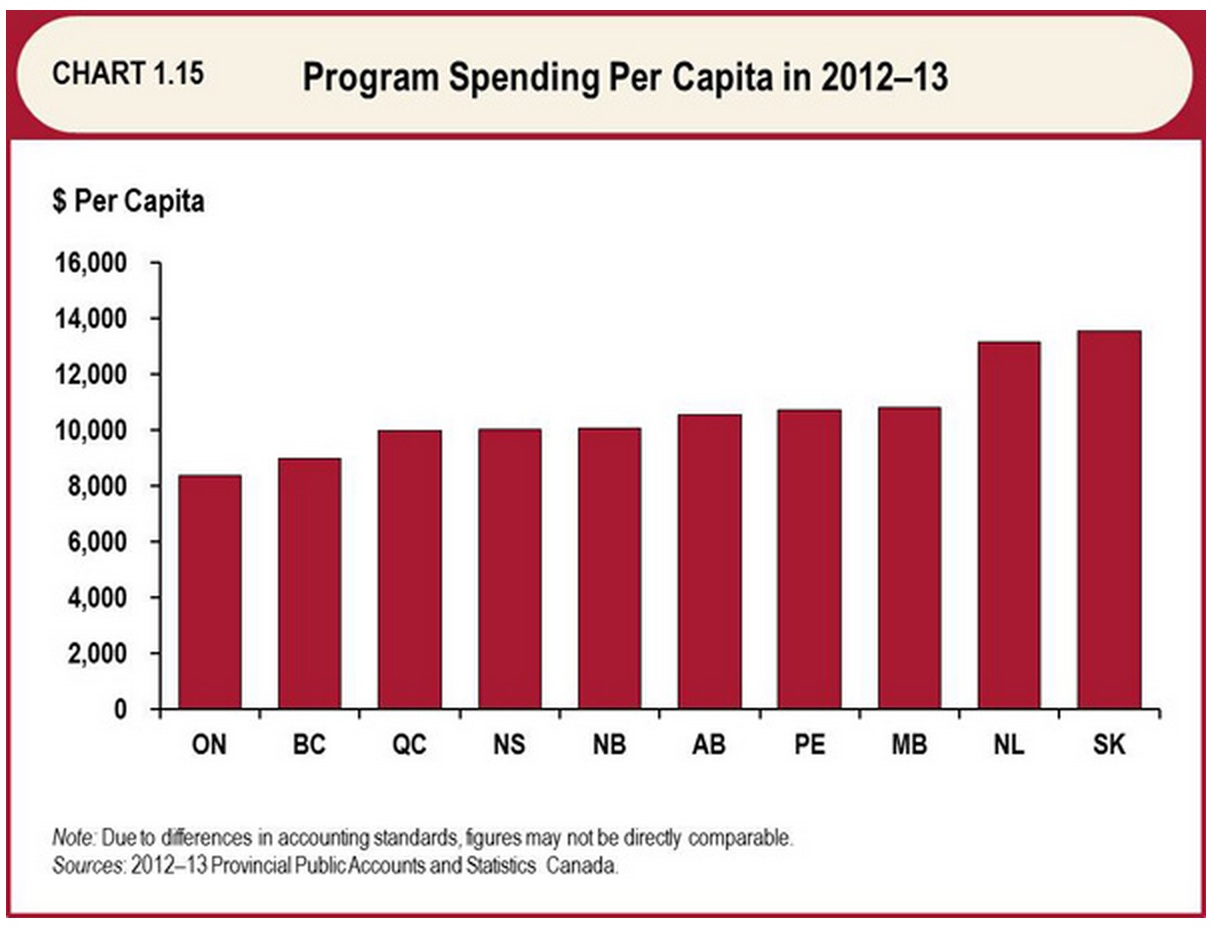 3. Support for the automotive sector

Wynne gave a spirited defence to Hudak’s not unreasonable “corporate welfare” description of the Liberal 10-year, $2.5-billion Jobs and Prosperity Fund (JPF) by stating that if Tim Hudak were premier, he would have let Chrysler and GM’s Ontario plants close during the 2008-10 automotive industry crisis. While this could be treated as simply an interesting historic “what if” debate, it has significant policy relevance today with the future of Chrysler’s plant in Windsor, Ont., in doubt. While Hudak has not said unequivocally and specifically that he would not provide financial support to Chrysler, it would appear to go against his entire platform. It is unclear what level of financial support the Liberals and New Democrats would be willing to provide Chrysler, except that the amount is significantly higher than zero. There are more questions than answers here. Can the Liberals provide adequate financial resources while still being able to fund their other JPF priorities? Where would the New Democrats find the funding for Chrysler? Perhaps more important, how do we simultaneously avoid large-scale structural unemployment in Windsor without creating the conditions for the next bailout?

Although it is possible to extract some substance from the debate, the format left the leaders talking about too many issues in too short a period of time. Perhaps it is time to adopt Andrew Coyne’s suggestion of multiple debates, each with an individual theme. Perhaps then voters will be given enough details to make a more informed decision.