Three reasons why the government should care about undersavers 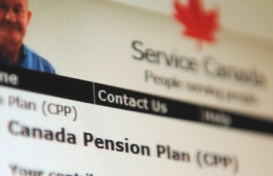 Finance Minister Jim Flaherty returned Canada Pension Plan reform to the shelf on Monday, after meeting with his provincial counterparts. Mr. Flaherty expressed concern about the timing of reform—now isn’t good, in his view. In contrast, John Geddes reports that Prime Minister Harper has since mused that the CPP is not the right fix for the problem. Within the space of a few days the government seems to have gone from ‘not now’ to just ‘no’.

There is fairly broad consensus on the facts about pension income. Those with lower lifetime earnings have their pensions topped up already and so wouldn’t benefit from a CPP reform. For mid to higher incomes, most Canadians with employment-based pension plans are doing alright. It is those without employment-based plans who are at more risk of trouble. According to the Geddes report, the Prime Minister seems to have a firm grasp of these facts.

The fundamental disagreement is found in what action should follow from these facts. Some view retirement savings as a purely individual responsibility in which government should take no further role. The Prime Minister states that the focus should be limited to those without employment-based pensions who are undersaving. Others want government involved more heavily through a large-scale expansion of the CPP or other broadly-based measure. The status quo of taking no action is a powerful incumbent here. Those advocating for either a targeted or a broad-based reform still need to make the case against the status quo by arguing that government intervention is needed and would be productive. Here are three ways to continue to make that case.

First, the current employment-based pension and individual savings system has weaknesses. On the employment-pension side, some see a fairly steady decline in pension coverage, and an erosion in the quality of benefits for those who are covered. On the individual side, saving through RRSPs is expensive for many, and other savers may lack the desire or capacity to make complex financial decisions. Government action to push more of these savings into the efficient and well-performing CPPIB may improve investment outcomes at lower cost.

Second, we need to plan a pension system that accepts us as the imperfect people we are. Humans often have trouble focusing on far-off events that lack current salience and require present sacrifice. Economists have great expertise at fretting over price incentives, but often ignore the power of psychological incentives. In the realm of saving, these psychological levers have proven at least as important. Government has a potential role to help remediate these psychological disincentives. In particular, any voluntary approach will fail if it doesn’t take careful account of how to bring today’s non-savers into a new voluntary system.

The third argument for further government involvement is perhaps the most powerful, as it tugs at the purse-strings of those who like their governments small. Lower income seniors in Canada receive the Guaranteed Income Supplement. Recently published research by a team from the University of Ottawa shows that GIS receipt rises with age, in a fairly sharp way. By age 90, the probability of GIS receipt rises by about 25 percentage points compared to age 65. This happens in part because people outlive their savings. Since GIS is funded out of general revenues, we all pay for these GIS recipients. In this way, undersavers cost us all. The alternative to topping up undersavers with the GIS is to force those undersavers to tuck away more of their own money when they are young. By mandating savings on undersavers, the future tax burden is reduced by forcing people to save for themselves. Even small government advocates might find that attractive.

With CPP reform apparently off the table, the next steps are not clear. The existing Pooled Registered Pension Plan initiative is slowly taking shape, but further developments may not be in place before the next election. Whatever direction the debate takes, the extent of the role of government is sure to be central.