What we know about monetary policy no longer holds — for now

In conversation with Stephen Poloz at a meeting of the IMF 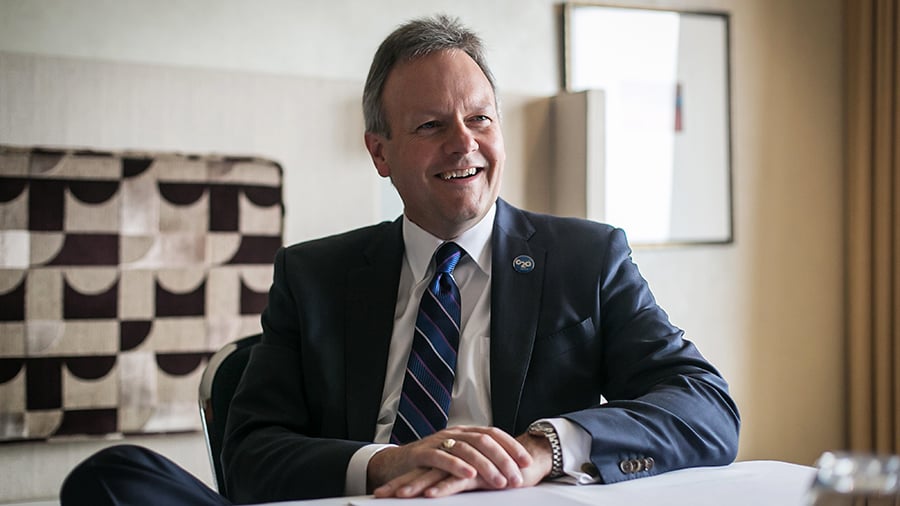 WASHINGTON — Bank of Canada Governor Stephen Poloz dislikes being asked to pass judgment on each and every economic indicator that Statistics Canada releases. “I don’t usually have a running commentary on these things,” he told a few reporters who gathered around at the International Monetary Fund in Washington on Friday evening.

But it is not every day the central bank’s key measure of inflation surges to its fastest rate in more than six years — precisely what the “core” rate had done earlier that day. Normally, such an increase would portend higher interest rates. Poloz has no desire to raise interest rates, so the surge in prices had to be put in context in case anyone gets the wrong idea.

“The fundamental forces on inflation are downward, not upward,” Poloz said.

Related: Q&A: Stephen Poloz on jobs, debt and the economy

It was the latest example of Canada’s central bank governor having to explain why all the things we thought we knew about monetary policy no longer hold — at least for now. Perhaps the greatest challenge facing central bankers is convincing the public they know what they are doing.

That used to be fairly easy; when inflation rose, so did interest rates. The Bank of Canada’s mandate is to keep the annual monthly increases in the Consumer Price Index (CPI) between 1 per cent and 3 per cent. For simplicity’s sake, the central bank talks about aiming at the midpoint of the band, or 2 per cent. That effectively is the central bank’s inflation target.

Many of the prices used to measure the CPI—fruit, gasoline, intercity transportation—jump around. So the central bank keeps an eye on a refined measure that ignores the eight most volatile items in the CPI basket to get an idea of the underlying trend. When the core rate speeds past 2 per cent, that usually indicates that inflation is getting too hot for comfort. On Friday, Statistics Canada said the “core” inflation had accelerated to an annual rate of 2.4 per cent in March. That was the fastest since November 2011. The rate was 2.1 per cent in February.

Related: Inflation is back. Now what?

Poloz said he would “look through” the March inflation figures, which he reckons are sending false signals. Canada’s central bank governor thinks in stories, and he had one ready to explain what happened last month. A major source of the increase in inflation was in the price for automobiles. The value of the Canadian dollar has declined about 8 per cent against the U.S. dollar since the start of the year. Car makers don’t adjust their prices that fast. So in March, the cost of automobiles shot up because the weaker dollar made imports more expensive. That should be temporary.

Car-and-truck companies eventually will lower prices to match the decline in the exchange rate, Poloz said. Overall inflation will slow to match an economy that is weak by historical standards. “It is a mathematical consequence of depreciation,” he said.

There is a strain of wishful thinking in Poloz’s story. It sounds right, but the Bank of Canada governor conceded his explanation was based on his understanding of the pricing strategies of the big automobile makers. The central bank hadn’t completed a full analysis of the latest inflation data, he said.

Related: The A to Z of the oil crash

That means it is possible—if unlikely—that March numbers signal something other than the central bank’s working hypothesis. Various economists, investors and politicians have warned for years that ultra-low interest rates would inevitably spark runaway inflation. These doom-mongers mostly have been discredited because inflation simply has failed to appear. But a section of the public remains highly skeptical about global monetary policy. Indicators such as Canada’s March inflation numbers embolden the skeptics.

This is why Poloz must counter with his own explanation. Economics currently is very much like politics in that conflicting visions are competing for public supremacy. It is a public-relations war that Poloz and his counterparts must win if their policies are to remain effective. If executives, investors and households lose faith, they won’t borrow and spend, no matter how low interest rates are set.

The mood at the semi-annual meetings of the IMF and the World Bank last week was slightly more positive than it has been in recent years.

The IMF said the global economy should expand slightly, a significant statement because the fund had been making a habit of revising its forecasts lower in recent years. “Risks to the global outlook are more balanced since we last met,” finance ministers and central bank governors from the Group of 20 nations said Friday.

But no one is getting ahead of him or herself. Apart from the clash over monetary policy, the liveliest debate in economics is Harvard University professor Lawrence Summers’s “secular stagnation” hypothesis. Summers, a former U.S. treasury secretary and adviser to President Barack Obama, posits that a convergence of factors such as an aging population and high levels of private debt have combined to severely limit the potential of developed economies to achieve the levels of economic growth to which they have become accustomed.

Even if Summers isn’t entirely correct, most agree he is onto something.

Poloz said he doesn’t like the term “stagnation” because it creates the impression economies won’t grow at all. But he does think Canada’s post-crisis economy is a lesser version of what it was before the Great Recession. The Bank of Canada estimates that potential growth—the amount of output the economy can generate without stoking excessive inflation—is now 1.8 per cent. That’s not a good number. Poloz will resist raising interest rates until he knows the economy is growing at least that fast, which is why he can “look through” monthly pops in inflation.

“I don’t for a minute think we are trapped,” Poloz said. “I see us heading for a destination. But I have to acknowledge that that destination is a slower growth track than we’ve been used to in the past.”