What you need to know ahead of the interest rate announcement

Are we in a recession? Will the Bank of Canada cut the interest rate again? Should it? 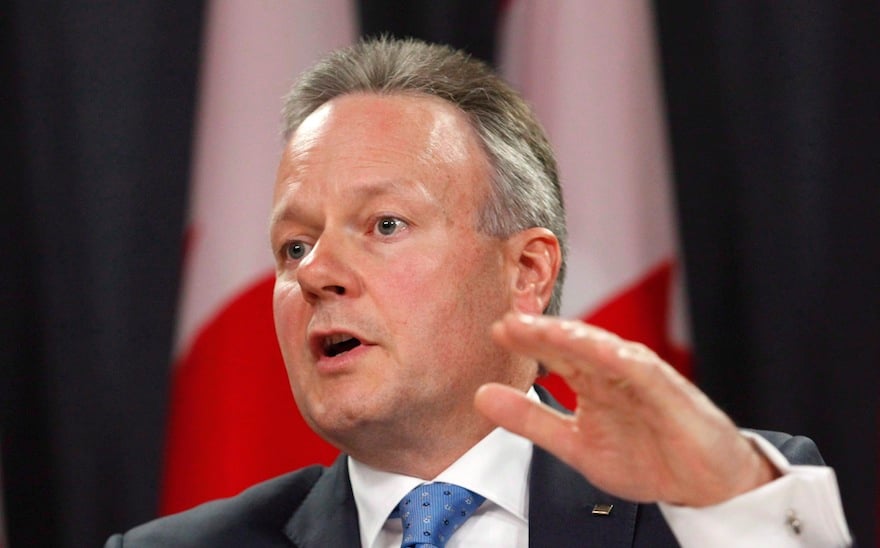 Some notes before tomorrow’s Bank of Canada interest rate announcement and the live chat here at Maclean’s.

Maybe. There’s no really useful definition of recession that I’m aware of that can be applied to data. We think of recessions as sustained, generalized reductions in economic activity, and using two consecutive quarters of negative GDP growth can be a useful rule of thumb. But it’s not a hard-and-fast criterion: There’s really not much difference between an economy that contracts at 0.1 per cent for two consecutive quarters and one that grows at 0.1 per cent for two consecutive quarters. The decision is largely subjective. The CD Howe Business Cycle Council (of which I’m a member) is based on a collective consensus, which is also the technique used by the U.S. National Bureau of Economic Research.

So I’m going to try to avoid the question directly. But it’s worth noting that the CD Howe chronology also distinguishes recessions by severity, going from Category 1 (mild) to Category 5 (most severe); the 2008-09 recession was placed in Category 4. If the current episode does end up being classified as a recession, it would likely be ranked as less severe than Category 4.

Here is how employment and monthly GDP evolved during 2007-09:

If the current episode is a recession, a plausible candidate for the peak is December 2014; monthly GDP has declined in the four months since then. I’ve kept the same vertical scale.

Another indicator I like to look as is initial EI claims. These data have significant seasonal patterns, but you can see the pronounced spikes in 2008-09. There’s not much to see in the most recent data, though. EI claims jumped up a bit in February and March of 2015, but they fell back to their usual seasonal levels in April.

It’s a different story in Alberta. EI claims there are following the same pattern they did in 2008-09.

2. Okay then, why are we even asking why we might be in a recession?

As you must have heard by now, the answer to this question is that the prices of oil and other resources fell. The mechanics of how changes in oil prices affect the Canadian economy are a bit tricky, and you have to go beyond the standard macroeconomic framework in which there is only one good: GDP. If you missed it, you might want to look at my beer-and-pizza analogy. It turns out that looking at GDP alone doesn’t capture the full effect of the fall in resource prices; you have to look at Gross Domestic Income (GDI), as well.

What’s happened is that, even though production has held more or less steady, the prices we’re receiving for what we produce have fallen. This has the same effect as a wage cut: Even if economic activity (hours worked) holds steady, incomes fall. GDI fell a bit in 2014Q4 and by a lot in 2015Q1:

3. Wow. So does this mean the Bank of Canada will cut interest rates?

No. Or, at least, if the Bank does cut interest rates, this is not why. For Canada, a fall in resource prices reduces our terms of trade: the ratio of export prices to import prices. An increase in the terms of trade increases our buying power, even if export quantities stay the same—and a decrease in Canada’s terms of trade reduces our purchasing power (see the fall in GDI).

Probably the most famous example of a large, negative terms of trade shock is the United States after the oil price spike in 1973: 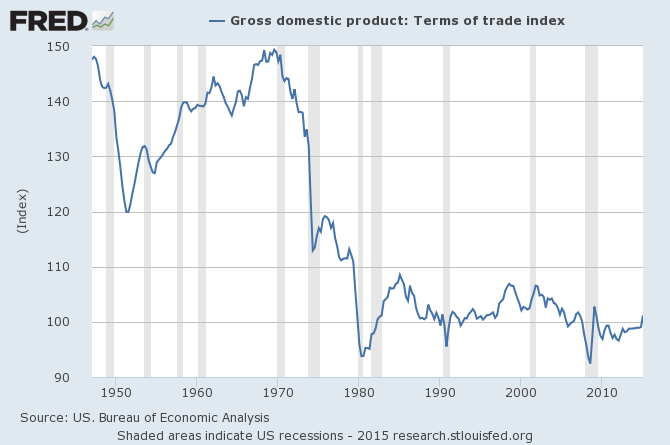 A useful way of looking at international trade is as a form of technology: Ss far as Canada is concerned, the rest of the world is an enormous, magical black box that somehow transforms potash into iPhones. Increasing terms of trade has the same effect as technical progress, and decreasing terms of trade can be interpreted as a form of technical regress.

The story of what happened next is well-known. When the U.S. was hit with a negative terms-of-trade shock, it tried applying the usual countercyclical measures to stimulate aggregate demand—and they didn’t work. The once-stable Phillips Curve—which offered a tradeoff of higher inflation in exchange for lower unemployment—had disappeared. This puzzle generated a flurry of research and several Nobel prizes, and one of the things that came out is that increasing aggregate demand (expansionary fiscal policy and/or expansionary monetary policy) will not offset a negative productivity shock.

If there’s a silver lining, the Bank of Canada’s commodity price index appears to have levelled off since March, so the GDI news in 2015Q2 doesn’t look as though it will be as bad as it was in 2015Q1.

4. Oh. So does that mean the Bank of Canada won’t decrease interest rates?

It still might. Although inflation has been increasing in the past few months (which is, incidentally, one of the things you might expect from a negative productivity shock), the Bank may want to see inflation establish itself above target for a while, before it’s confident that the last vestiges of disinflation have been worked out of the Canadian economy. Moreover, the chances of another financial crisis cannot be ruled out.

5. What do you think the Bank of Canada should do?

If I were a member of the Governing Council, my vote would be for no change. But if everyone else favoured a rate cut, I wouldn’t argue very hard.