We're in the dark when it comes to our housing market

It’s been a busy few months in the political sport of real estate bubble-wrangling. What started with the B.C. government’s snap decision this past summer to impose a 15 per cent tax on foreign buyers continued when Ottawa rolled out measures to tame the real estate sector, such as making it tougher to get mortgages and limiting lenders’ access to mortgage insurance. That will unfold further as the federal government looks for ways to unload some of the risks of bad mortgages onto lenders, rather than have taxpayers shoulder all the burden.

All big moves, indeed. So here’s a question: has there ever been a time when so many economy-shaping government policies were rolled out so quickly but with less knowledge about their potential impact? We know the housing market is a significant and growing share of Canada’s economy—one might even argue that real estate now is Canada’s economy. What we don’t know is just about everything else about it. Canada’s housing market is an information black box. To borrow Al Pacino’s classic snarl, when it comes to housing, we’re in the dark here.

It doesn’t need to be said this is an awful way to do policy, and there’s some measure of irony that the mantra of “evidence-based policy” is so pervasive right now. The stumbling path governments took before deciding to act on the issue of foreign buyers is a case in point. While many speculated foreign buyers were driving Vancouver home prices to ridiculous heights, as recently as a year ago the B.C. government and the local real estate industry pointed to a lack of data and dismissed such fears. The Canada Mortgage and Housing Corporation, the taxpayer-backed mortgage insurer, weighed in with its own assessment that foreign property purchases were a small part of the market. Then as the backlash grew this past spring, the B.C. Liberals changed tack, rushed out data showing foreign buyers accounted for 10 per cent of the value of Metro Vancouver sales, and imposed a 15 per cent tax on foreign buyers—which conveniently delivered a big boost to Premier Christy Clark’s popularity in the process. For its part, the Trudeau government’s first budget set aside $500,000 for Statistics Canada to study the question, but without the results in hand, it moved to close a tax loophole it said was benefiting foreign buyers.

The truth is, we still have no idea how big an impact foreign buyers have had in Canadian real estate. It means we also don’t know whether the slowing of Vancouver’s housing marking is attributable to the tax on foreigners, or if other factors are at play.

What other information gaps do we have? There are almost too many to count, but one of the largest, as far as homebuyers are concerned, is the continued lack of transparency around sales and pricing in the resale market. For all the efforts by Canada’s competition watchdog to open up access to basic real estate data, it remains firmly under the control of a self-interested monopoly of realtors.

More questions: How prevalent is flipping? How many people have bought multiple properties? What is the average down payment of mortgages held by the various banks? How many down payments are gifts? What is the average mortgage payment at the various banks? How many struggling homeowners have had their mortgages modified by lenders, which might keep them from showing up in delinquency statistics when markets are rising, but also could result in a pool of barely solvent borrowers who run into trouble en masse when prices fall? How many homeowners have second, third or even fourth mortgages? How big is Canada’s private lending sector, meaning those lenders not overseen by the country’s banking regulator, and where do they operate? How many homeowners have borrowed against the equity in their homes to themselves invest in private mortgages for buyers turned down by conventional lenders? You get the point. In other countries, the answers to many such questions are readily available. 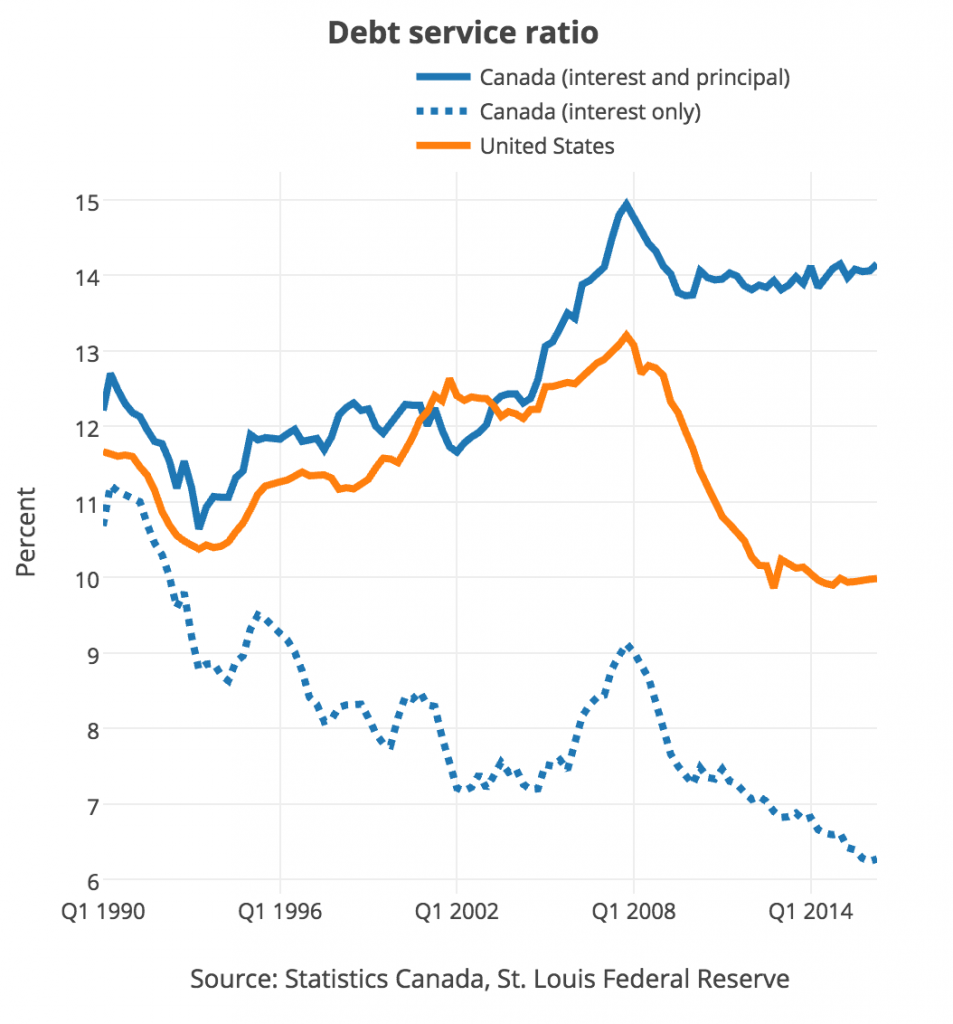 Here’s just one little example of how new information can change our understanding of the market. There was a time when those downplaying fears about household debt levels would regularly point to Canada’s record low debt-service ratio, a measure of the share of household disposable income needed to meet debt obligations. The ratio was low, of course, because interest rates are low. What this argument always failed to note, though, was that the Statistics Canada release only captured interest payments, and not repayment of the original borrowed amount.

Then last year the agency  changed how it measures the ratio to include principal payments, which brought it in line with how the U.S. measures debt obligations and painted a far more worrisome picture of household finances (see chart). As such, you don’t hear the debt-service ratio trotted out anymore to dispel concerns about household debt in Canada.

The absence of reliable data about the housing market, lending practices and household finances is arguably reflected in the relative lack of academic research into those issues. Consider this: recent moves by the provinces and Ottawa to put a price on carbon have led to something of a stimulus boost for academic economists, resulting in a flood of research papers and commentary analyzing how various carbon pricing mechanisms would impact the economy. Ottawa’s attempts to tighten lending practices have drawn far less in-depth analysis. Maybe that makes sense. Economists develop theories and build models to test those theories, yet there are simply too many gaping holes in our understanding of the housing market to effectively do that.

The Bank of Canada does try, mind you. It has an army of economists at its disposal and the best access to housing-related data of any organization in the country, and while the reports they produce on the subject don’t get as much attention as they should, they’re invaluable nonetheless. Yet the Bank really can’t say how the various housing measures taken by governments in recent months might impact the economy—its latest Monetary Policy Report estimates real GDP growth will take a 0.3 percentage point hit by the end of 2018 as a result of the new mortgage rules, but cautioned, “There is considerable uncertainty around the overall impact of these new measures on the economy.”

When it comes to understanding Canada’s primary economic growth engine and how policy changes affect it, the most effective tactic might be throwing darts at spreadsheets.

It’s all a depressing reminder that in Canada, transparency remains a dirty word and paternalistic attitudes about protecting the public from information prevail.

So Bank of Canada governor Stephen Poloz, appearing at a Senate committee last week, argued against the release of minutes from the Bank’s internal deliberations—as is done in the U.S.—because it might curtail frank debate.

And so Canada’s anti-money-laundering watchdog refused to disclose which bank it fined for not reporting suspicious transactions earlier this year, arguing it was enough to say a fine was issued.

Is it any wonder we know so little about what’s really going on in the housing market?

The result is an information vacuum to be exploited by politicians and self-interested voices in the industry. This isn’t an argument that Ottawa shouldn’t be working to bring sanity back to the housing market. Lending standards for mortgages have been too loose, foreign buyers should face the same rules as Canadian buyers, and lenders should have more skin in the game. The problem is, information gaps that existed for years as the bubble inflated have little chance of being addressed now, as policy-makers scramble to deal with an overheated market.

All they can do is stumble in the dark.