Why barriers to trade between the provinces leave us all poorer

A new Senate report offers a roadmap to freer interprovincial trade and a stronger Canadian economy. Will anyone listen? 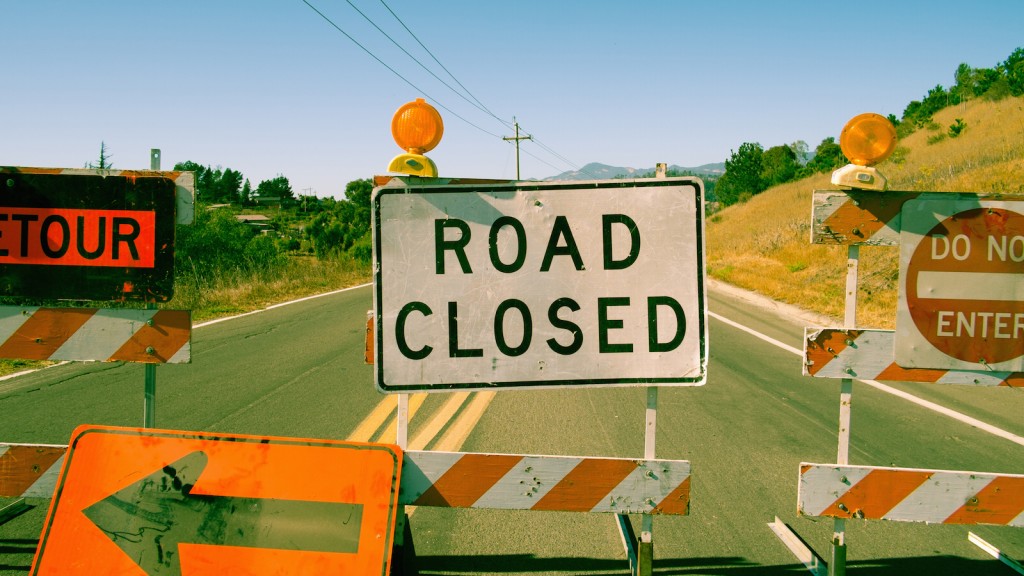 The Senate has a message: Mr. Trudeau, tear down these walls.

In a report released Tuesday morning, Canada’s Senate makes a strong case that artificial economic walls between provinces have no place in our confederation. These walls are not tariffs or quotas, of course, but countless thousands of sometimes minor differences in rules and regulations. Such differences make it hard to operate across borders and equally hard for goods and services to move freely.

To make this concrete, the Senate Tweeted ten noteworthy examples. It’s worth a read, so here it is. 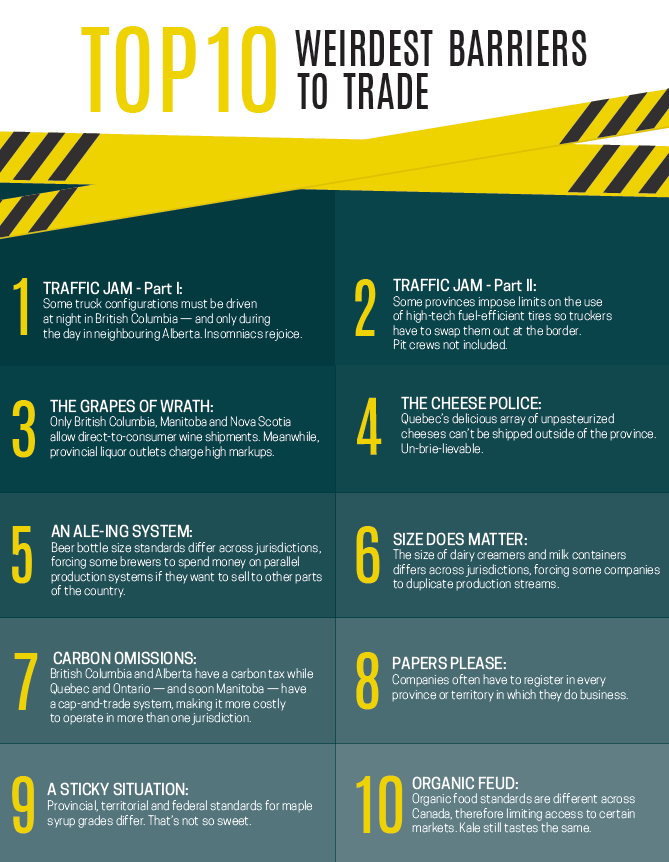 It’s an interesting list. No legitimate public policy objective is served by legislating different creamer containers, beer bottle sizes, organic kale standards, or maple syrup grades. But item #7 on carbon pricing policy differences isn’t so silly, and doesn’t really belong. More on this later. The list is also silent on the countless differences in professional certifications, apprenticeship rules, or other such barriers to labour mobility and trade in services. It also doesn’t tackle biased government procurement policies, such as governments in one province giving contracts for supplies, say, to potentially more expensive local firms when better suppliers in another province are ready, willing, and able.

In any case, it serves an important illustrative purpose. Though all individually may seem trivial, and perhaps some of them are, slight difference in rules and regulations can inhibit trade and impose costs upon households and businesses. These costs add up and our economy is smaller for it.

Before turning to the specifics of the Senate recommendations, let me set the stage in an overly simple, but hopefully helpful, way. 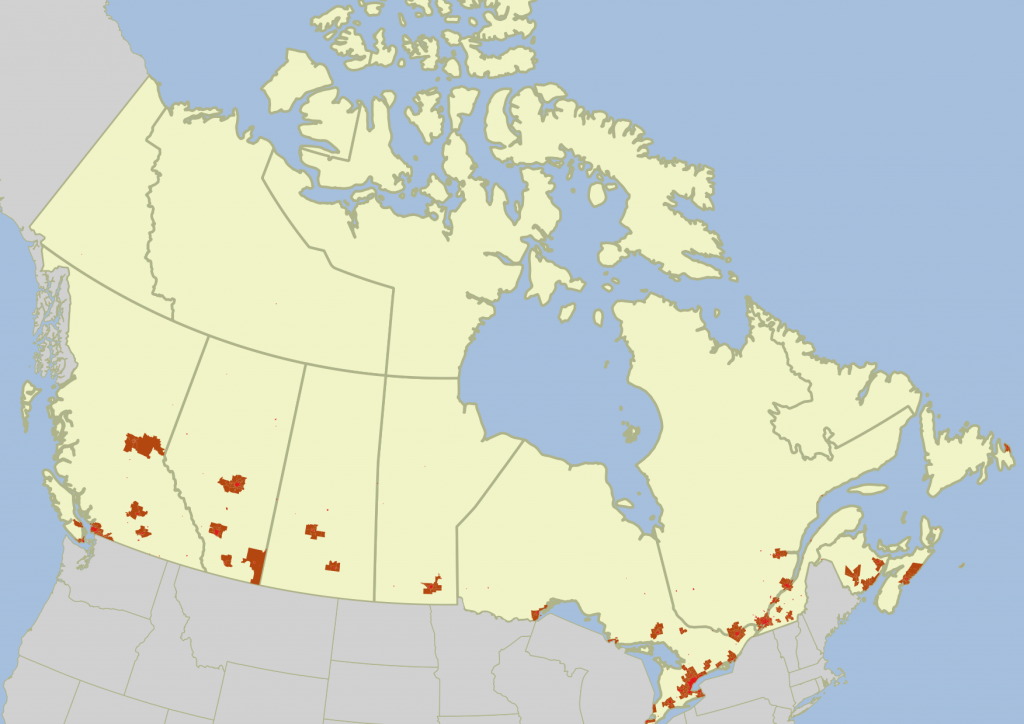 Trade is critical to connect these pockets of activity and ensure high standards of living in each. Without trade, each island would have only itself and its residents would be far (far) worse off.

Imagine life on the Island of Edmonton without trade. Gone are the days of enjoying Pacific Salmon, or of driving cars assembled in Ontario. And gone are the days of exporting your beef and oil in exchange for those goods. You might eventually figure out how to make your own car, or fish farm your own Salmon. But it just wouldn’t be as good. In autarky, you’re alone—and you’re poor. Trade is critical.

Another way to see the importance of trade between Canada’s provinces is to look at the data. The value of goods and services shipped between provinces is equivalent to 20 per cent of Canada’s GDP. That’s approaching $400 billion dollars—and more than half of that is trade in services, rather than physical goods. These are big numbers. Compare them with international exports, which gets most of our attention, at roughly 30 per cent of GDP. For some provinces, the two types of trade are very similar in size, and for others, internal trade even exceeds international. 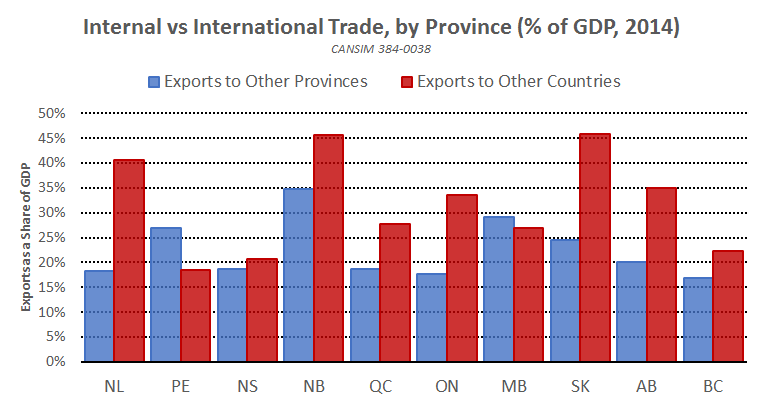 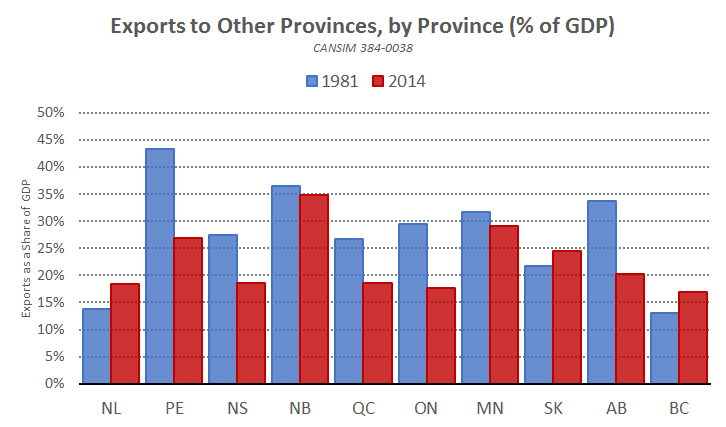 This suggests a problem. Canada’s trade policy is focused on other countries, with internal trade left to the provinces (who haven’t done very much). In fact, the Senate report notes that with the approaching Canada-EU agreement, we will be in a situation where European companies have easier access to some Canadian markets than Canadian companies from another province.

So internal trade is declining relative to international, and there are numerous regulatory barriers that might be at fault. But why does this matter? For one, lowering internal trade costs would mean an improved Canadian economy. By how much is a trickier question, as estimates vary. The Senate heard testimony from a variety of sources, and the range of estimates span two orders of magnitude. From a low of less than $30 per person per year, to a high of nearly $4,000. Despite the range of estimates, I strongly suspect the true cost is in the tens of billions of dollars nationally, and potentially over $100 billion. (Quick aside: I’m one of the researchers, along with Lukas Albrecht, behind the high estimate cited by the Senate report. Our estimates suggest internal trade barriers may shrink Canada’s economy by between 3 to 7 per cent. That’s a range $60-130 billion per year.)

Regardless of how costly internal trade is for our economy, no credible research suggests it is zero. So if there are simple and sensible proposals to unify our markets, why not pursue them?

What the Senate Recommends

The Senate has several recommendations, the big ones can be summarized as:

1. Reach a deal that harmonizes or mutually recognizes regulations, standards, or certifications throughout Canada. Make it broad, and make it enforceable.

2. Establish a corridor within which pipelines, railways, fibre optic lines, power transmission lines, and so on, could be built and operate more easily than under the existing ad-hoc, project-by-project approach.

The second item recognizes that some trade is blocked because of a lack of proper infrastructure (such as pipelines, to name an obvious example). I’ll have little to say about this, but interested readers should see this recent report from the University of Calgary’s School of Public Policy by Kent Fellows and Andrei Sulzenko. It’s a very compelling idea.

For most other trade, the first item gets to the heart of the matter. As barriers are due to differences in rules and regulations, we need some way to either harmonize them or for provinces to mutually recognize each other’s.

Actual policy though can’t be this simple; compromises are inevitable and there would (and should) be exceptions. The carbon taxes in B.C. and Alberta are in many ways superior to Ontario and Quebec’s cap-and-trade schemes. But both aim at clear and defensible public policy objectives, and potentially respond to unique their economic circumstances or policy preferences of their electorates.

So what’s a good (and realistic) deal between the provinces look like? It would be broad, cover issues of labour mobility, trade in services, and government procurement, but it would also include two critical features. First, it would use a “negative list” approach. Instead of provinces saying where they would harmonize or mutually recognize, they’d say where they wouldn’t. Make free and unencumbered trade the default, not the other way around.

A good deal would also include formal and binding ways to settle differences. This is critical. For a deal to matter, it must be enforceable. That means having a dispute resolution mechanism with teeth. It means large penalties for non-compliance or, better yet, the authority to impose changes on a province’s regulations. Think of it like binding arbitration. An enforceable deal also means giving businesses that might run into artificial and unnecessary barriers the ability to challenge governments before any such tribunals.

If such a sweeping and binding deal cannot be reached, or begins to take too long (read: July 1, 2017), the Senate recommends an interesting “contingency plan” for the Federal government: get the Supreme Court involved.

The legal issues are interesting. Section 121 of our constitution states, “All Articles of Growth, Produce, or Manufacture of any one Province shall, from and after the Union, be admitted free into each of the other Provinces.” But, does this mean provinces can’t regulate freely within their own areas of jurisdiction? Section 92, after all, outlines a number of such areas, such as property rights, the incorporation of companies, or (critically) the regulation of trade and industry within a province. And Section 121 says articles of “manufacture”, so where does that leave services? Depending on how the Supreme Court rules on such questions, the Federal government might find itself with the power to enforce harmonization or mutual recognition on recalcitrant provinces. That would be a very interesting—though messy and politically acrimonious—route. Let’s hope it doesn’t come to that.

All of this will pose a challenge to provincial governments and those that claim sovereignty is being undermined. But everyone will be in the same boat, and the costs of compromising on some policies are outweighed by the benefits from a larger and more unified market.

Overall, the Senate report is strong. It recognizes the importance of trade between provinces, and the economic consequences of inhibiting it. It sketches out the characteristics of what a good deal would look like, and what the Federal government should do to get there. It will prove a useful yardstick by which we can measure any future deal the Provinces come up with. We should all be watching closely.