Trevor Tombe: It's time to start thinking outside the box with temporary measures that isolate federal and provincial debt related to the pandemic 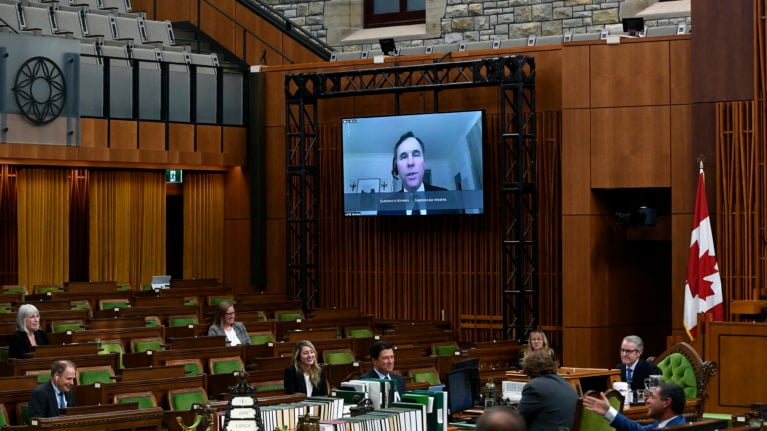 Minister of Finance Bill Morneau appears via video conference on a digital display at a meeting of the Special Committee on the COVID-19 Pandemic in the House of Commons on Parliament Hill in Ottawa, on Monday, June 1, 2020. (ustin Tang/CP)

The federal government’s fiscal response to COVID-19 dwarfs anything yet seen outside wartime. Wage subsidies to employers, emergency benefits to individuals, enhanced sales tax and child credits, partially forgivable loans to businesses, and so on. All together, direct support so far exceeds $150 billion.

Combined with lower revenues from the COVID-induced recession, the federal deficit is on track to be $260 billion this year, according to the Parliamentary Budget Officer.

It’s nearly five times larger than the $56 billion deficit during the financial crisis in 2009. It surpasses the combined total of every deficit between 2008 and 2019. And at 13 per cent of the economy, it’s larger than any prior Canadian deficit outside of World War 2. 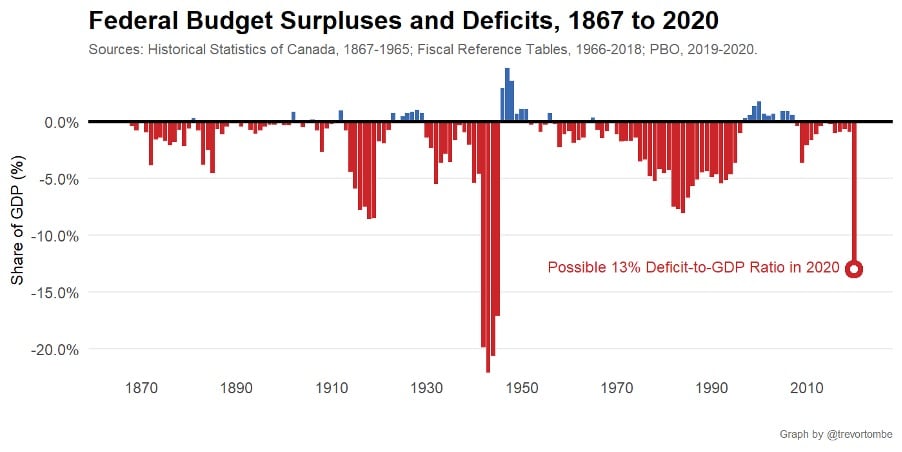 With debt accumulating so rapidly, it’s natural to feel concerned and wonder how we will repay it. Will taxes have to rise? Program spending fall?

Luckily, neither is strictly necessary. We can carry this additional debt for quite some time. But if you want to bring debt levels down — and indeed it might be prudent to do so — there are modest and gradual options available.

The question isn’t “how will we repay the new debt?” but “can we sustain it?” And the government’s ability to sustain it is tied directly to the size of the economy and the interest rates we pay.

Thankfully, current interest rates are low. The interest rate for the Government of Canada to borrow for ten years is barely over 0.5 per cent. So borrowing the full $150 billion to cover new COVID costs comes with barely $7 billion in interest over ten years. That’s barely one-third of one percent of Canada’s GDP. And even at higher rates of, say, five per cent, the carrying cost of this debt is equivalent to one GST point. That’s manageable.

Of course, direct COVID costs aren’t the end of it. Large new spending programs after the worst has past will surely be enacted. Pressure to support individuals and businesses who remain displaced and measures to support a broad recovery will be immense. So long as future spending decisions remain prudent — and the largest of the COVID assistance programs are phased-out this year — federal debt will remain manageable.

Consider one scenario: if deficits in 2021/22 remain historically high, at roughly $75 billion, and if deficits in 2022/23 are $45 billion before gradually returning from 2024 onwards to the fiscal path we were on prior to COVID. In this scenario, I estimate the federal government may still see falling debt-to-GDP — returning to pre-COVID levels within two decades. (Provinces are in worse shape; but I’ll come back to them shortly.) 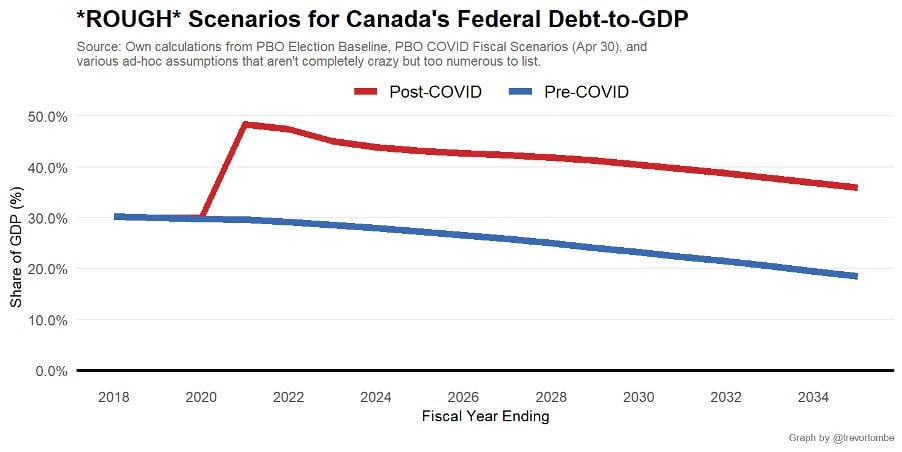 This is just one scenario, and the devil is always in the details. But it’s hard to find a reasonable scenario where federal debt spirals out of control. Even if interest rates soon rise beyond five per cent, federal debt remains sustainable.

READ: Canada needs a new prescription for the pandemic recession

But doing nothing is risky. Perhaps growth rates decline. Perhaps another recession hits and, like Ontario recently, the federal government ratchets up from one higher debt level to another. And perhaps (as is likely) an aging population creates significant fiscal pressure for provinces, requiring federal help.

Bringing down federal debt more quickly may be prudent. There are options on both the revenue and the spending side of the budget.

Consider returning to a seven per cent GST. Below I illustrate the effect of this change on federal debt levels. We return to pre-COVID levels within roughly a decade. 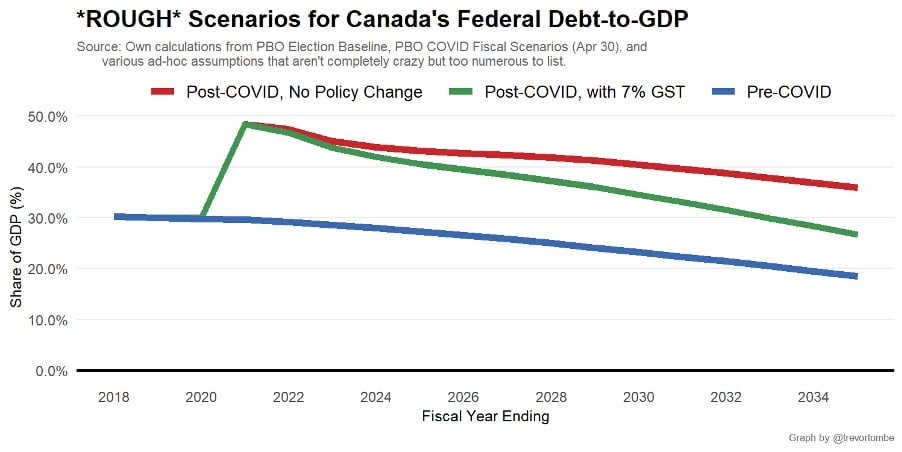 Spending restraint is also available. For example, increasing the eligibility age in OAS back to 67 from its current 65. This would, by 2030, have a similar fiscal effect as a one per cent increase in the GST. Below, I show the effect of just one per cent slower program spending growth from 2022 onwards. Again, we return to pre-COVID levels within a decade. 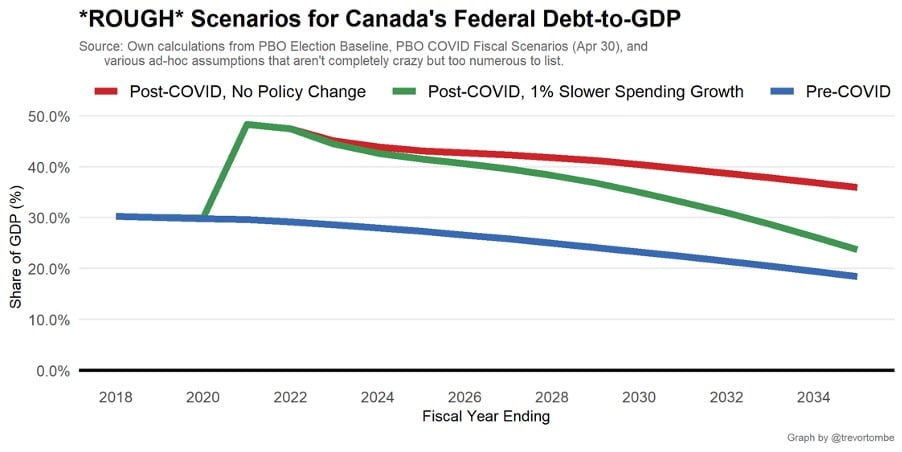 Whatever your preference, this exercise reveals that the massive COVID fiscal shock this year is manageable with modest and gradual policy choices.

But increasing taxes or decreasing spending — even among those who favour either to repay debt — may raise questions about permanently changing the size and scope of government. Temporary shocks, after all, should probably not lead us to make permanent policy changes. Such decisions should be made on their own merits, independent of COVID.

An explicitly temporary response to COVID-related debt may be in order.

Thinking way outside the box

Here’s a hare-brained idea: a COVID Debt Repayment Fund. (Something like the Generations Fund in Quebec.)

Imagine we create a new entity that takes on the $150 billion in incremental COVID-related debt to fund the new temporary spending measures. In effect, we isolate this debt within a separate pot funded by a special issue of a ten-year bond. Then, and this is key: provide this entity with revenue from a special temporary levy (a CST, or “COVID Sales Tax”) of roughly 1.5 per cent, which could even appear separately next to the GST on your receipts to highlight its temporary nature. Proceeds would not go to general revenue, but instead into a “Repayment Fund” and invested by the Canada Pension Plan Investment Board. Over time, these contributions would grow enough to potentially repay the entire COVID-debt when it matures in ten years. We’d only need an average return of eight per cent. 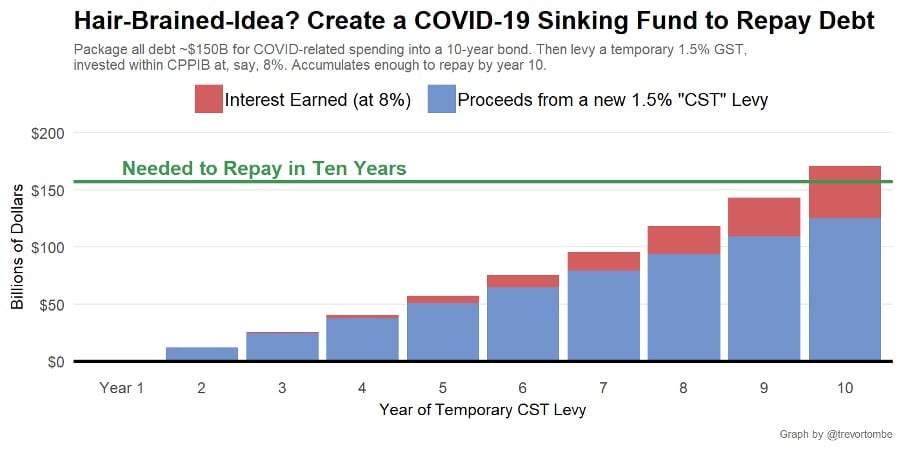 This would be explicitly temporary in the legislation to meet clear debt reduction targets. Revenue and debt repayments would be accounted for and reported separately and it would be monitored and reported on by this new arms-length entity. When the debt is retired, the Repayment Fund would be unwound and the temporary tax tied to it eliminated. (Side note: government could also temporarily redirect program spending to the fund if tax increases were off the table.)

This idea recognizes the unique and one-time nature of COVID-costs and explicitly plans for its repayment. All other revenue and spending measures made by the federal government would remain part of the regular budget process.

Provinces — who are in a tougher spot — could also join the Fund. Incremental expenditures by provincial governments might exceed $20-25 billion and revenue shortfalls might be even larger. Debt allowances could be apportioned on an equal per-capita basis — just as the original allowances were at Confederation. Of course, adding billions in provincial debt to the Fund would lengthen the repayment time. But only slightly: instead of ten years, we’d require eleven or, maybe, twelve.

To be sure, this might be a terrible idea, and I might be neglecting some important considerations. But even if it is, and even if I am, it is a valuable thought experiment. It reveals the magnitude of the fiscal challenge that COVID has so-far created: it’s roughly equivalent to a 1.5 per cent GST increment over ten years. And if we’re willing to keep this going for fifteen years, only a 0.75 per cent GST increment would be needed.

Whatever your view of increased taxes, recognize that if you want to repay the incremental debt then the funds will have to come from somewhere. And if you’d rather not change spending or tax policy, that too is an option.

Despite its massive scale, the current COVID-related debt is manageable. Options range from doing nothing to doing something small. As the fiscal debate in Canada heats up over the summer, we should all keep this perspective in mind.