A look at the long-term demographic trends that have held back growth, and could continue to do so for years to come 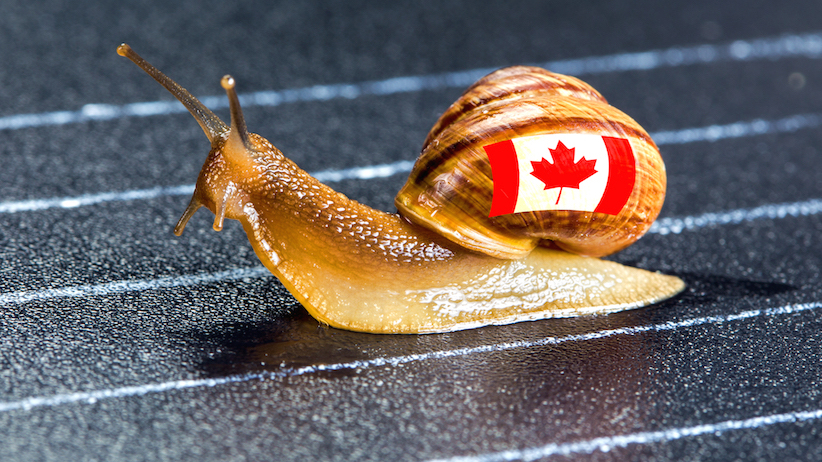 It was tempting to look at last week’s job numbers and conclude that Canada’s economy has finally turned a corner. After a horrendous July, during which 32,000 jobs were lost, August surprised to the upside—26,000 positions were added, more than economists expected. Coming on the heels of a decent monthly GDP report for June and an apparent rebound in exports in July, the good news on the labour front surely marks a turning point, right?

Canada certainly needs a jolt. After countless false starts over the last seven years, this is by far the slowest post-recession period of growth any time in the last 60 years.

So is this finally the Canadian economy’s moment to shine? Unfortunately, the answer is probably no. Far from August being a “blockbuster” month for jobs, a look at some longer-term trends shows more of the grim same—and helps explain why Canada risks being stuck in a rut for the foreseeable future.

Let’s begin with the job report. On an annual basis employment grew by just 0.4 per cent, just a notch ahead of the post-recession low of 0.3 per cent in August 2014. But other aspects of the job market were even worse. Canadians actually saw an annual decline in hours worked of -0.4 per cent from a year ago, the weakest showing since December 2009. Meanwhile annual wage growth, which has been slowing since February, slipped again in August to just 1.47 per cent. In fact, adjusted for inflation, paycheques showed almost no improvement at all over the last year, rising just 0.2 per cent.

The following chart reflects all three important measures—job growth, wages and hours worked—by adding together the annual growth rate of each. (The chart first appeared here, then here, then here.) For the first time in August, it fell below the post-recession low set in 2014. Since 1998 the only period during which it was lower was the Great Recession.

There was other unpleasantness in Statscan’s labour report that pointed to long-term problems. While the unemployment rate gets all the attention (it ticked back up to 7 per cent in August) it doesn’t capture how moribund the job market is, since it doesn’t count people who are not actively seeking work. The employment rate, on the other hand, measures how many people out of the entire working-age population are actually working. And it’s been grinding lower since 2012. At 60.9 per cent in July (flat from June) it’s back to where it was in late 1990s.

In short, there is little evidence in the labour market to suggest a turnaround is here.

Why can’t Canada’s economy pick up the pace? The comforting answer would be to blame it all on lingering shock from collapsing commodity prices or the Fort McMurray wildfires. Both have left deep marks on the economy, but a full recovery from both is also possible. Canada showed that after the 1980s oil crash, and how it’s rebounded from other short-term shocks, such as 9/11. It just takes time.

Time, however, is not on Canada’s side when it comes to what truly ails the economy. Here’s a clue.

Last year Statistics Canada noted that for the first time there were more people over the age of 65 in this country than those aged 15 and younger. The above chart, which compares the number of Canadians aged 25 and 65 for each year, projected out to 2025, shows we’re due for another similar demographic milestone.

Or more like a demographic millstone. As people age, they work less, their day-to-day spending drops substantially and their purchases of big items like homes and cars are (for the most part) behind them. An aging population also brings with it  slower population growth, which in turn reduces the opportunities and incentives for companies to invest. This is the theory of secular stagnation that economist Alvin Hansen first introduced in 1938, and which former U.S. treasury secretary Larry Summers warned about more recently.

Put it all together and you get this: Canada’s long-term rate of growth has tumbled as the ratio of young people to old has collapsed.

That bump in long-term growth rates from 1998 to 2009 coincided with Canada’s commodity boom, but the economy has resumed its downward growth trend since then.

And we’re still in the early stages of this labour force slowdown.

Until now Canada, as with most other nations, has looked to its central bank and low interest rates to spur growth. But monetary policy has failed to deliver the goods this time around.

The Bank knows this all too well. In a speech in London to the Official Monetary and Financial Institutions Forum on Wednesday, Senior Deputy Governor Carolyn Wilkins warned that an aging population—not just in Canada, but around the world—will result in lower potential growth in the future and that interest rates will remain low. This, in turn, is leading to greater risk-taking by households and investors and increases the risk of financial instability down the road. “Monetary policy is not well suited to deal with structural problems, and today’s challenges go far beyond temporary shocks,” she said.

The onset of the Great Recession more or less coincided with the peak in the working age population. The initial central banks response to the short-term shock helped economies rebound from the financial crisis. But then the structure slowdown from the aging workforce started to set in. And so for the last five years the Bank of Canada has effectively used low interest rates to make up for the effects of Canada’s aging workforce, by encouraging people and businesses to borrow and spend.

However, in Canada, only households took the Bank of Canada up on that offer, pushing debt levels to extremes seen in the U.S. just prior to that country’s housing crash.

The debt-fuelled frenzy for real estate has lead to the biggest property bubble this country has ever experienced.

And it’s left Canada with an economy that is more dependent on heavily-indebted households than at any time in decades.

The Trudeau government believes it can counter these demographic forces and unwind the economy’s dependence on households by ramping up government spending. In an interview with Bloomberg recently, Financial Minister Bill Morneau reiterated the government’s plan to take an activist role in growing the economy. “We need to be consciously focused on the efforts that we can collectively do to increase growth, and consciously thinking about how that growth results in better outcomes,” he said. That means injecting billions into households through child benefits and other forms of support, and directing many, many billions more into infrastructure. All told, the Trudeau government’s planned deficits add up to nearly $120 billion over the next five years.

For its part, the Bank of Canada clearly welcomes the help. “Fiscal policy can be a powerful tool to boost growth, from both the demand and supply sides,” Wilkins said in her speech. “That said, government spending cannot solve everything either. We know that an aging population will put pressure on public finances through pensions and healthcare spending.”

If there’s one lesson countries learned from using monetary policy to tackle this secular slowdown, it’s that such efforts can have unintended consequences. It may be no different as governments take up the battle with fiscal policy.

If Trudeau’s big infrastructure bet doesn’t accelerate growth—and there are any number of reasons for why it might not, such as the potential for poor project selection, cost overruns, political interference, overly ambitious growth multipliers, the crowding out of private investment, investor uncertainty over rising debt levels, an increase in the loonie that hampers exports… we could go on—then Canada will be left with continued stagnation and much larger deficits .

On the other hand, if massive government spending does translate into a boost in incomes for Canadians, that would likely result in a quickening of inflation, and may force the Bank of Canada to raise rates. This week a report from TransUnion, a credit agency, found that close to 720,000 Canadian households would struggle to absorb an interest rate increase of just 25 basis points, even though more than two-thirds of them have credit scores that put them in the category of prime or better.

We’ve seen the unintended consequences of trying to fight demographics with monetary policy. Now we’re about to find out if Trudeaunomics will fare any better at the task.

Meanwhile, Canada’s population will continue to march, ever more sluggishly, into its golden years.