How to steady Canada's fiscal imbalances

There's a good case to be made that federal transfers to the provinces should be increased. Here's how to do it fairly and efficiently.

Canada has an extensive system of transfers between levels of government. Transfers from the federal government have grown substantially over the 10 years of Conservative government, as shown in the chart below. The graph shows the proportion of federal revenues passed on to provincial and territorial governments. The results look very similar if you compare transfers to provincial spending or to GDP. (Data are here). 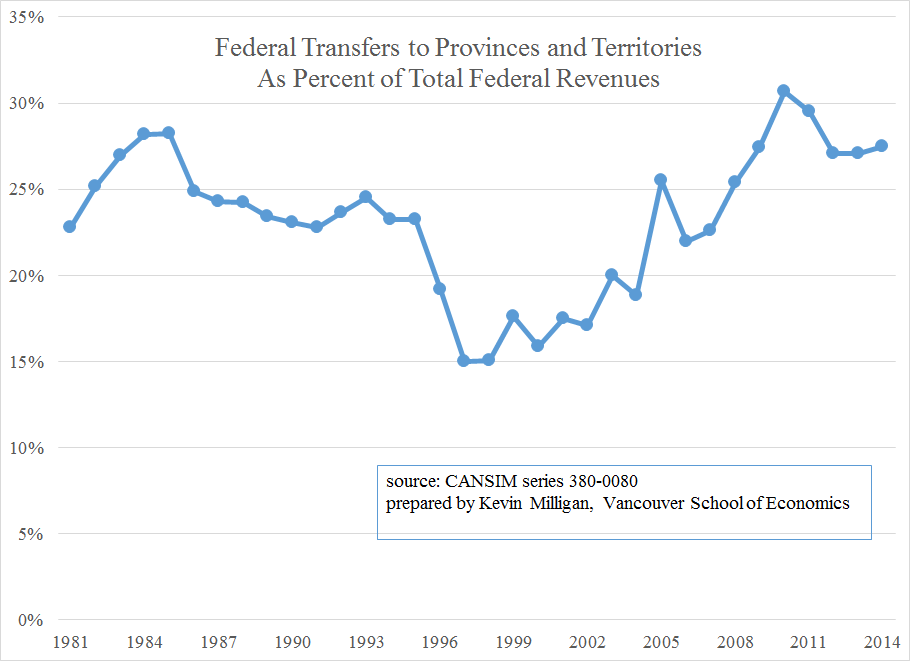 Federal transfers to provinces and territories, as a percent of total federal revenue

Groups like Engage Canada have claimed that $36 billion is being cut from federal transfers to health care—but even that claim has now been trumped by the Canadian Federation of Nurses Unions who calculate a $43.5-billion cut. As Emmett Macfarlane pointed out last November, to call the path of federal transfers a “cut” requires you to assume that transfers should have been growing even more quickly than they have.

But, even though transfers have increased, a good case can be made that it’s still not enough. For example, the recent PBO Fiscal Sustainability Report finds that provincial long-run spending obligations will outrun revenues, while the federal government’s long-run prospects look much better. Should the federal government help the ailing provincial budgets by increasing transfers even more?

Critics of increased federal transfers point out that provinces have access to a full array of fiscal tools, ranging from personal and corporate income taxes to sales taxes to carbon taxes. For example, Alexandre Laurin and William Robson from the C.D. Howe Institute worry that accountability is sacrificed when provincial governments spend federal dollars, leading to provincial overspending. How can provinces be kept to a path of fiscal probity if they don’t bear the political costs of raising the revenue they spend?

I think the “accountability” view is reasonable, but misses other important factors. We also need to be smart about economic efficiency on the tax side of our federation.

Take the case of Nova Scotia, which has big budget challenges, very high taxes and a declining working-age population. In a recent report for the Atlantic Institute for Market Studies, I found it hard to recommend taxes go any higher because of concerns that young people, new firms, and financial capital would continue to locate their economic power elsewhere in Canada.  When provinces are left to raise extra revenue on their own, out-migration of economic resources places a cap on how much any province can stand out from the pack.

When taxes lead people to shift economic resources around from place to place, we end up in a world where the tax system drives what gets produced where, instead of economic fundamentals. That’s not efficient—we want an economy driven by true economic considerations, not tax distortions. So, when thinking about what level of government should tax what things, we have to think about the mobility of economic resources.

At one end of the mobility spectrum, think of land. Land is not going anywhere no matter how much you tax it, so a local government can tax land without fear of it migrating over the municipal border.  At the other end of the spectrum, think about investment income which might be booked in various jurisdictions with no more effort than a simple accounting transaction. That kind of mobile income is easiest and most efficient to tax at the federal level. So, the best geographic scope of taxes depends on what item in is being taxed.

The same kind of geographic arguments can be made for government spending, ranging from fixing potholes to national defence. Fifty years ago, eminent Canadian economist Albert Breton pointed out that it would take a magical coincidence to find that the best geographic scope for taxes happened to line up perfectly with the best geographic scope for spending so that each jurisdiction balanced its budget using only its own revenues. Absent a magical coincidence, Breton argued for transfers between levels of government to even out the fiscal mismatches. With a system of transfers, we can (at least in theory) get both efficient taxation and efficient spending decisions at each level of government.

Can we expand provincial revenue in an efficient way while maintaining a strong sense of accountability? I think we can.

From an economist’s perspective, the best tool to even out provincial taxing power is the equalization program, which is designed specifically for this purpose. We had an expert panel on equalization in 2006 and several changes were implemented. For some reason, though, recent suggestions for increased transfers have not focused on equalization. Instead, other ideas have been put forward.

One idea is to cut federal taxes to create provincial “room” to raise taxes. I see two problems with this approach. First, the federal government doesn’t have a surplus right now so it’s not clear it has room to cut taxes. Second, some provinces have greater revenue needs than others, and making each provinces act on their own risks making the existing cross-provincial tax differences even larger. If we do that, concerns about out-migration from high tax provinces will grow more acute.

Another option has the federal government ramping up the existing transfers, paid for with higher federal taxes. That might be more efficient than forcing provinces to raise revenue on their own, but it doesn’t meet the demands for greater accountability.

In my view, the best option is for provincial action co-ordinated through the federal government.  On the GST, we could move to a “5+2” rate, with the extra two per cent clearly labelled and earmarked for the provinces. Or, we could think about personal income taxes. There could be a surtax on the federal tax form called the “provincial transfer surtax.” Even better from an accountability viewpoint, provinces could agree that this co-ordinated surtax be on the provincial part of the CRA tax forms (except for Quebec, which doesn’t use the CRA for its income tax).

By taking co-ordinated action, we can improve on the inefficiency of provinces having to raise taxes each on their own. By labelling a new tax clearly as provincial, the change would increase accountability. All it takes is a prime minister willing to use the co-ordinating power of the federal government and premiers willing to take responsibility for the tax revenue they say they need.

My disclosure statement is here.