Why Ontario needs to wean itself off the auto industry

Auto jobs will disappear eventually. A controlled exit is better than continuing the cycle of structural unemployment. 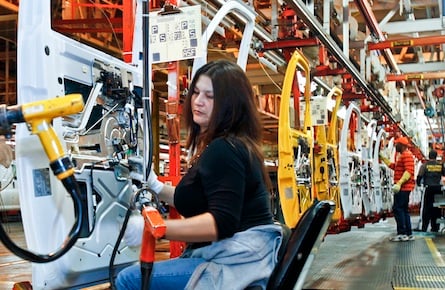 Should the federal and Ontario governments be investing more in automotive? A recent report by the Office of Automotive and Vehicle Research thinks so. I think there is a very strong case for additional spending in automotive—but not for the positive reasons that the Office describes.

The economic rationale behind government spending in the automotive industry is significantly different than the Ontario government’s Cisco deal. A deal with Chrysler is largely defensive, to ensure the continued existence of the industry in southwestern Ontario.

Pete Mateja of that Office of Automotive and Vehicle Research is quoted as saying “The Chrysler Windsor plant, we definitely need to hold on to it or it’s going to be devastating for Windsor.”  The loss of the Chrysler’s Windsor Assembly would put nearly 5,000 out of work directly, and thousands more indirectly, as Chrysler’s parts suppliers would follow with their own layoffs and closures. Those thrown out of work would have difficulty finding new jobs, as their existing skillsets are not otherwise in demand, a phenomenon economists refer to as structural unemployment.

High rates of unemployment have a budgetary cost to governments, from direct spending on employment insurance to a rise in health care costs as chronic unemployment diminishes mental and physical health. Since governments are going to have to spend significant amounts of money if the plant closes, why not simply pay to keep the plant open instead?

This “why not pay to keep the plant open” argument has been frequently used to rationalize government spending in automotive, most notably the U.S. Chrysler bailout of 1979. In the short run, this spending works as designed: the plant stays open, cars get produced, older workers retire with pensions and benefits and young workers are hired to replace them. The company, however—knowing that the spectre of structural unemployment still exists if the plant were to close—is always in the position to ask for more money by threatening to leave the jurisdiction. The initial government investment did not solve the structural unemployment issue so much as transfer it from one generation to the next. Current government investment in automotive creates the conditions for future structural unemployment, creating a cycle of corporate dependency on government.

It may be possible to structure these deals to avoid the dependency cycle. This cycle can only be broken if no young workers are locked into a system where they acquire a skillset that will not be in demand if the factory closes. My somewhat tongue-in-cheek suggestion has always been that any company taking money from government on such grounds not be allowed to hire anyone under the age of 45. I am uncertain if that is practical (or even constitutional), but there may be more subtle ways of accomplishing the same thing. One such way is by structuring the government “investment” in the form of a wage subsidy, where only workers with 15 or more years of experience are eligible for the subsidy.

We often hear that banks that are too big to fail are too big (or risky) to exist. The same clearly holds true for some automotive plants, which have gotten this size with the help of government handouts. But governments are not currently in a position to start saying no. The cost of high levels of structural unemployment is simply too high to allow automotive manufacturing to disappear overnight. Rather, a strategy for a controlled exit is needed, where government helps support existing workers while preventing a next generation of structural unemployment from emerging.