Eight charts to watch on climate and energy in 2022 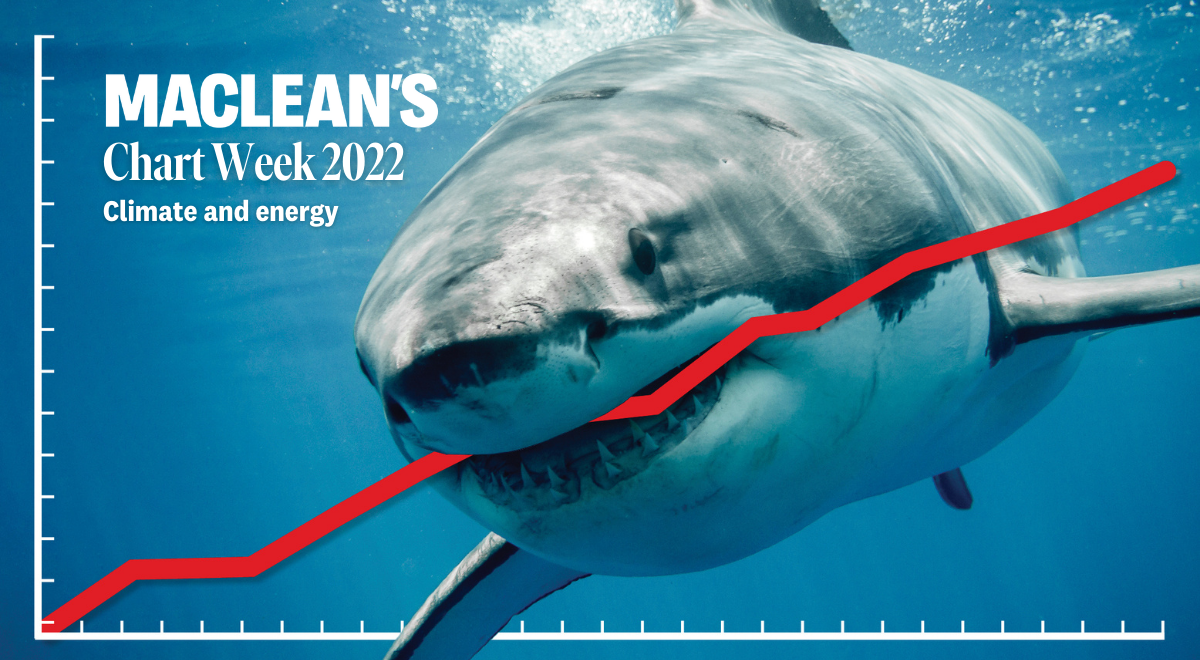 For Maclean’s eighth annual chartstravaganza, we’ve once again asked dozens of economists and analysts to ponder the year to come, and choose one chart that will help define Canada’s economy in 2022 and beyond, and explain this outlook in their own words. 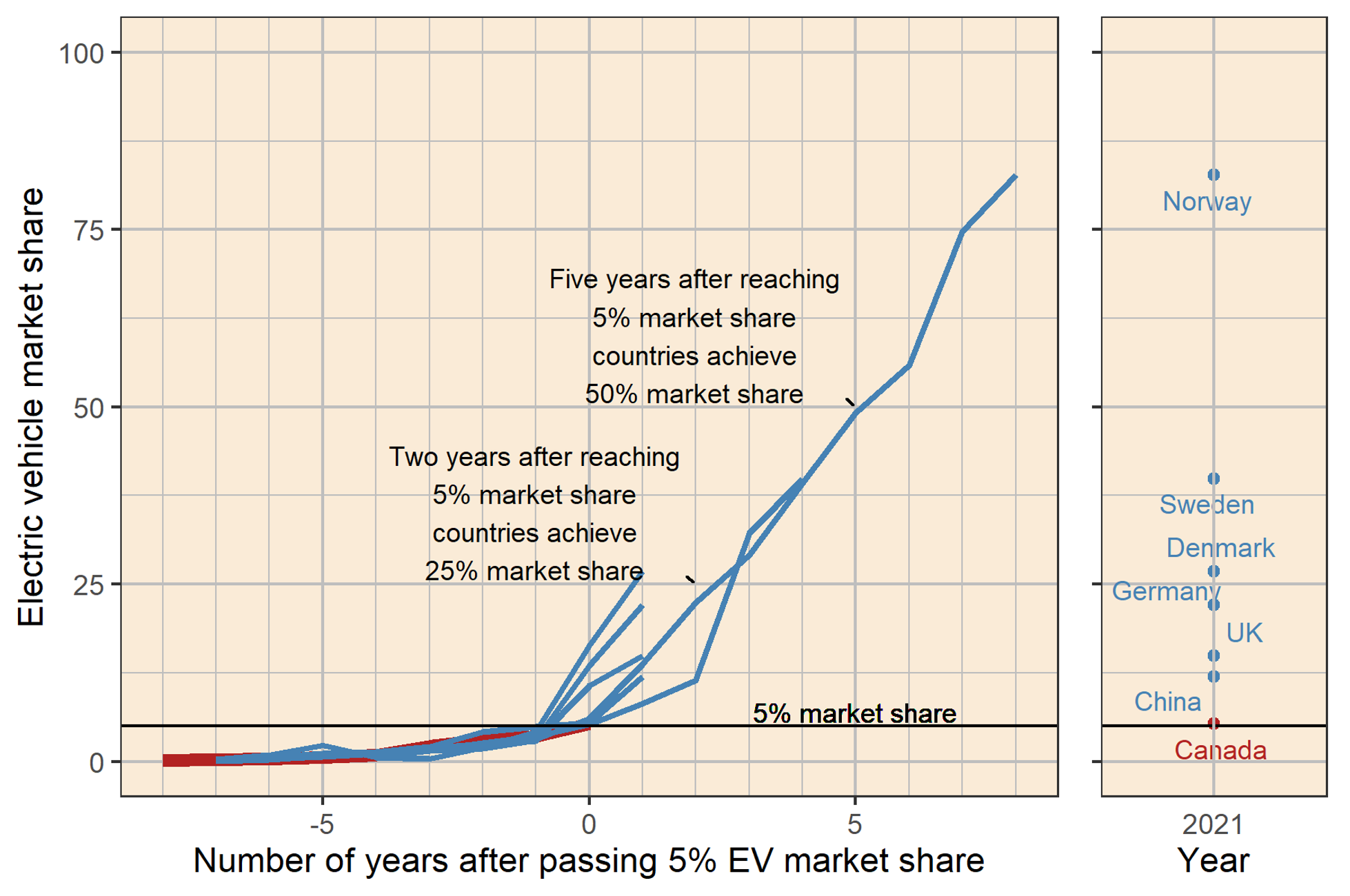 However, while it has taken Canada and other countries a long time to reach the five-per-cent mark in electric vehicle sales (the figure on the left shows that things can change rapidly once this mark has been hit). In all the countries shown, electric vehicle sales have taken off quickly after hitting five-per-cent market share. While Norway hit that mark in 2013 and as a result has a long head start in electrifying its vehicle fleet, other countries are following a similar trajectory.

For example, just two years after hitting the five-per-cent mark in other countries, 25 per cent of all vehicles sold were electric. And five years after passing the five-per-cent mark, countries appear on pace to have electrics represent 50 per cent of vehicle sales. Given the experience in other countries, we should expect a rapid transition in vehicle markets in Canada in the coming years.

Emissions from passenger road transport represent about 10 per cent of Canada’s total greenhouse gas emissions, and a rapid transition towards electrification is one way to substantially reduce these emissions. 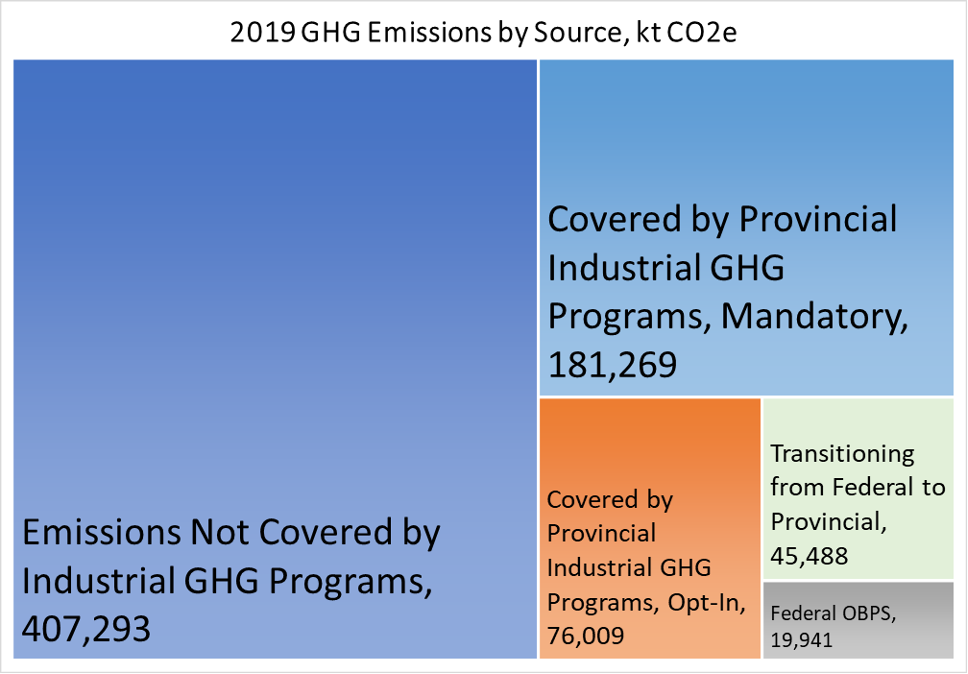 There are a myriad of emissions-pricing schemes across Canada for industrial emissions (the right half of the figure). These include the federal output-based pricing system (OBPS) and numerous provincial programs. The systems involve mandatory participation for some facilities (typically the largest ones) and opt-in provisions for others. The majority of Canadian industrial emissions are covered by provincial programs, which are generally weaker than the federal system, but the Government of Canada lets that slide. This might change. In 2022, Environment and Climate Change Canada will reassess provincial carbon pricing programs against the federal minimum standard. This means the review has the potential to increase the stringency of provincial large emitter systems if provinces cooperate. But what if some don’t? Facilities in those provinces might revert to the federal OBPS, or be subject to federal top-ups. Either way, federal-provincial fireworks will surely result. It remains to be seen how much commitment the federal government will bring to this issue. We should find out in 2022. 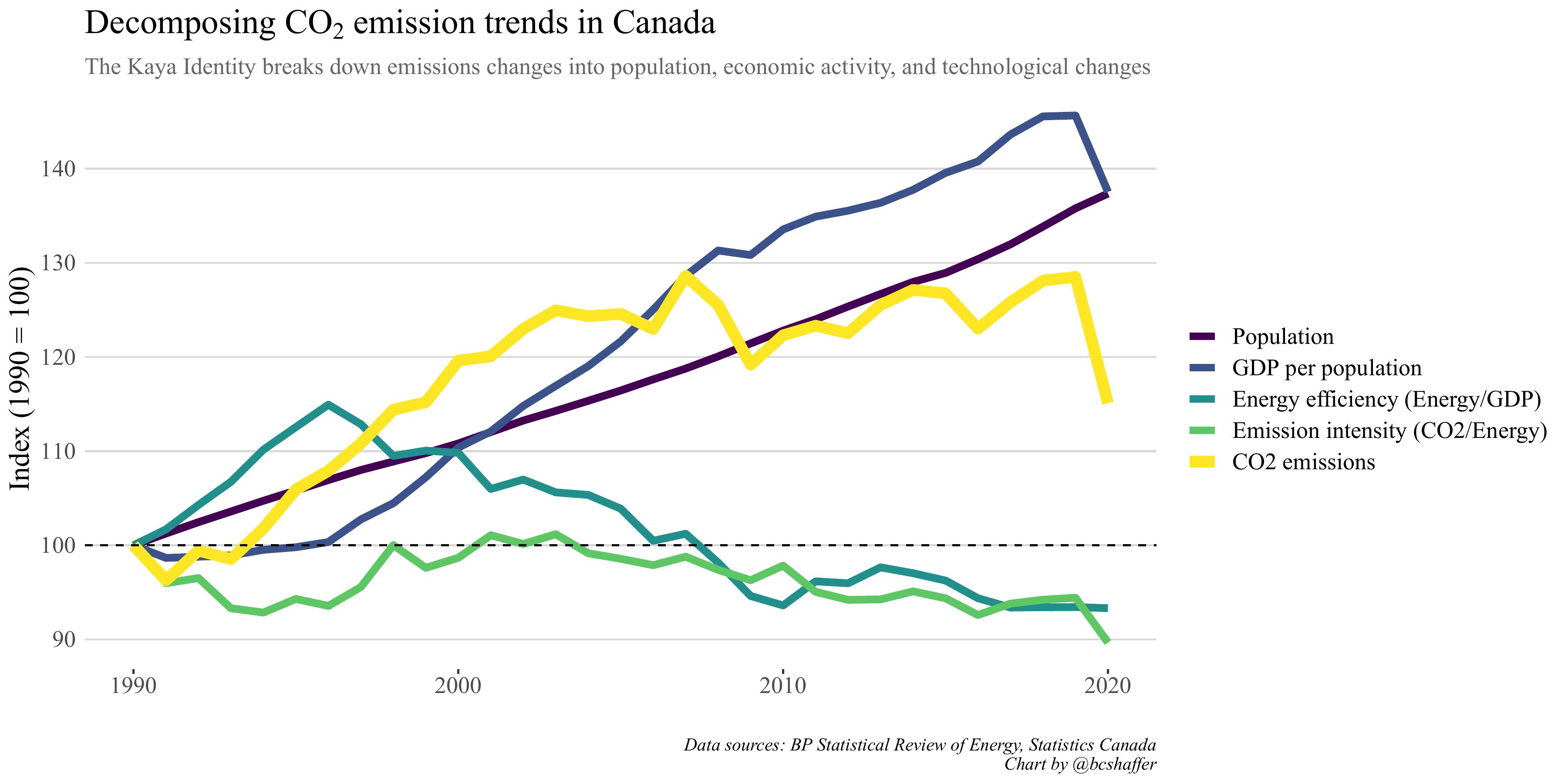 The year 2020 saw a dramatic decline in carbon dioxide emissions in Canada, falling roughly 10 per cent versus the prior year. Of course, the COVID-induced shutdown of large parts of the economy were largely responsible for this decline. But as the chart shows, that’s not all of it.

The chart is what’s known as a Kaya Identity, named for the researcher who came up with this method of decomposing changes in CO2 into: population growth, economic activity, energy efficiency and emission intensity.

The latter two terms represent technological improvements and structural changes, both in how much energy we use in our economy, and how emission intensive that energy is. Looking closely at 2020, while it’s clear a decline in economic activity played the starring role, an improvement (decrease) in emission intensity also helped to lower CO2 emissions.

As we look ahead to 2021 numbers and beyond (expecting a rebound in economic growth), will improvements in emission intensity and energy efficiency be sufficient to keep CO2 emissions down?

Near or far? Commute distances and electrification opportunities 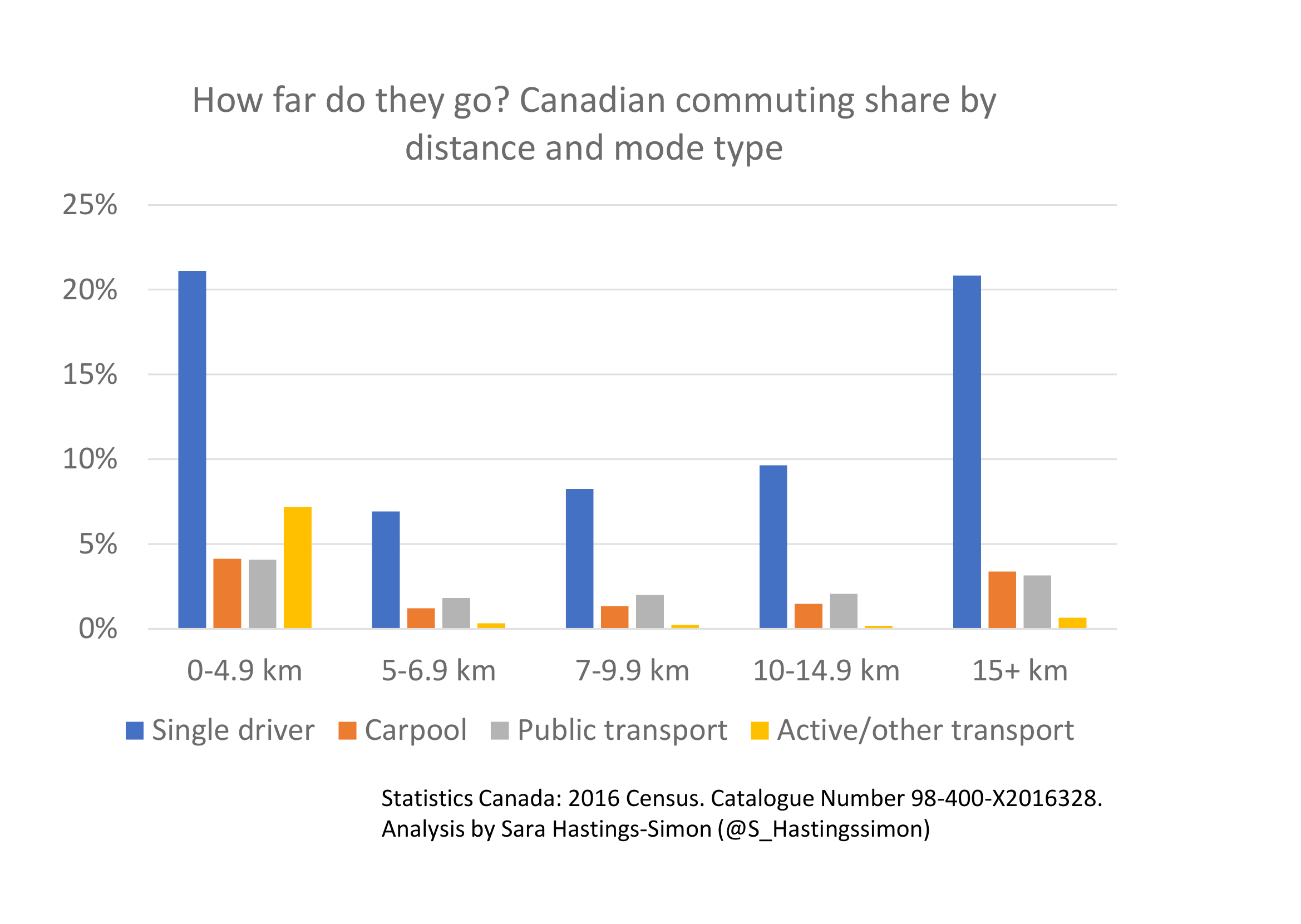 The best-selling electric vehicle globally is an electric bike. With a small motor and a battery offering pedalling assistance, a range of models that can carry children, groceries, and even packages for delivery, e-bikes are emerging as one tool in the toolbox for decarbonization of transportation. Policy makers are embracing the opportunity, with cities building out bike infrastructure, and providing support for e-bike purchases such as the tax credit for e-bikes included in the version of the U.S. Build Back Better bill passed by the House.

But Canada is a big, sparsely populated country, leaving many to wonder how practical bikes are for the distances we routinely travel. A look at how Canadians commute shows that over 20 per cent of trips are by car and under five kilometres. Including commutes up to 10 kilometres (or up to 25 minutes), bikes become an option for replacing car trips for over one-third of commutes, demonstrating the importance of going beyond a one-size-fits-all model to reach the Canadian target for emissions reduction in the transportation sector.

One of the biggest barriers for potential cyclists is the lack of safe infrastructure to get from point A to B, so investments in active transportation will likely have the biggest impact on how this chart changes in 2022 and beyond.

Women in Alberta energy jobs, or not

Alberta’s energy sector has historically been male-dominated, but it became more so after the oil price shock of 2015. Job loss has disproportionately impacted women during the downturn, and their recovery has occurred at a slower rate compared to men. While more than 9,000 men worked in the sector in 2019 relative to 2010, women’s employment levels are still below those seen in 2010.

In 2022, as more data becomes available, we should be watching and examining how these depressing trends change throughout the pandemic, especially in the context of net-zero carbon transition. We need to better understand what factors have been hindering the economic recovery of women workers in Albertan energy industries, so we are better equipped to design policies that advance gender-equal economic opportunities. 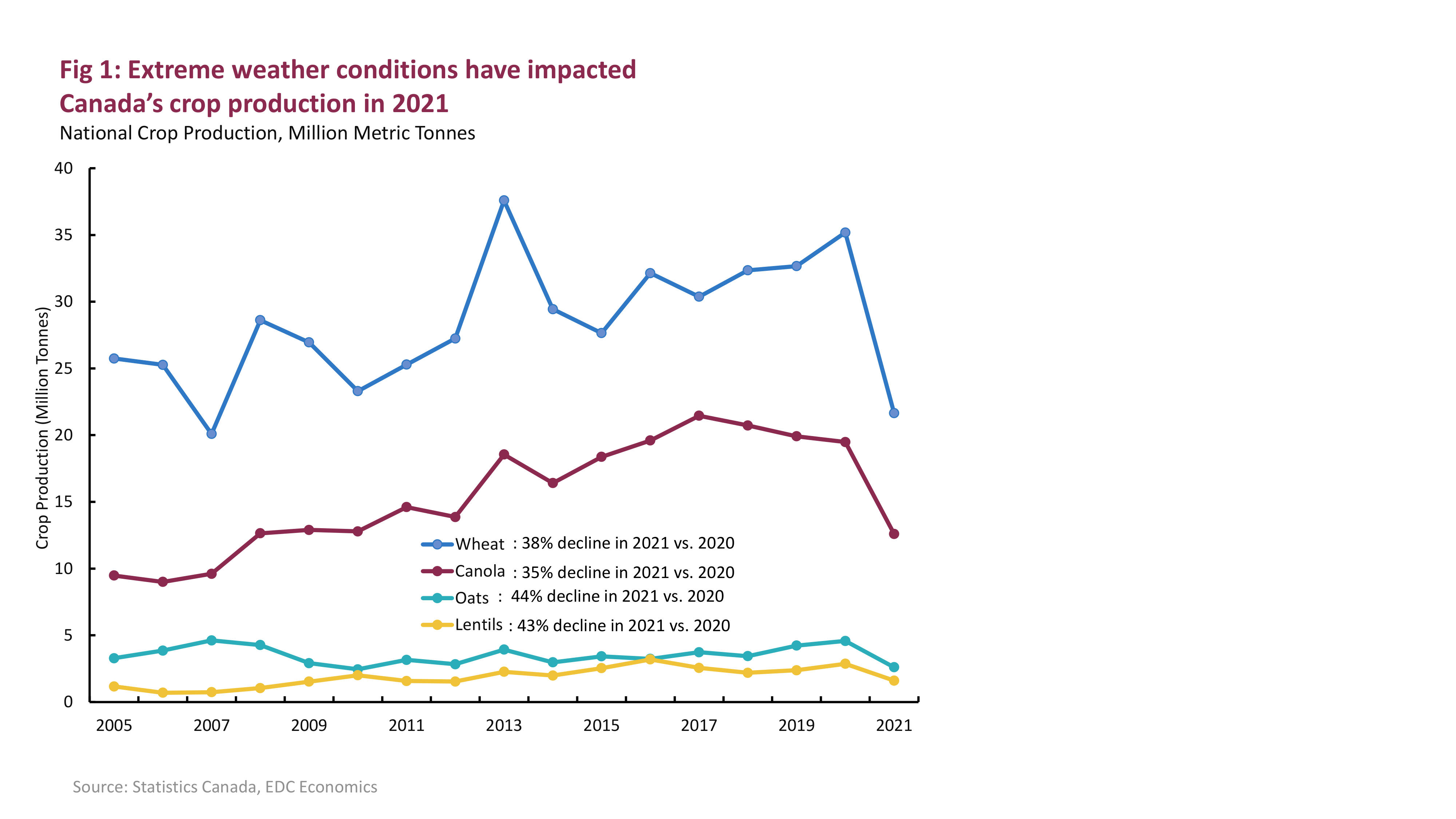 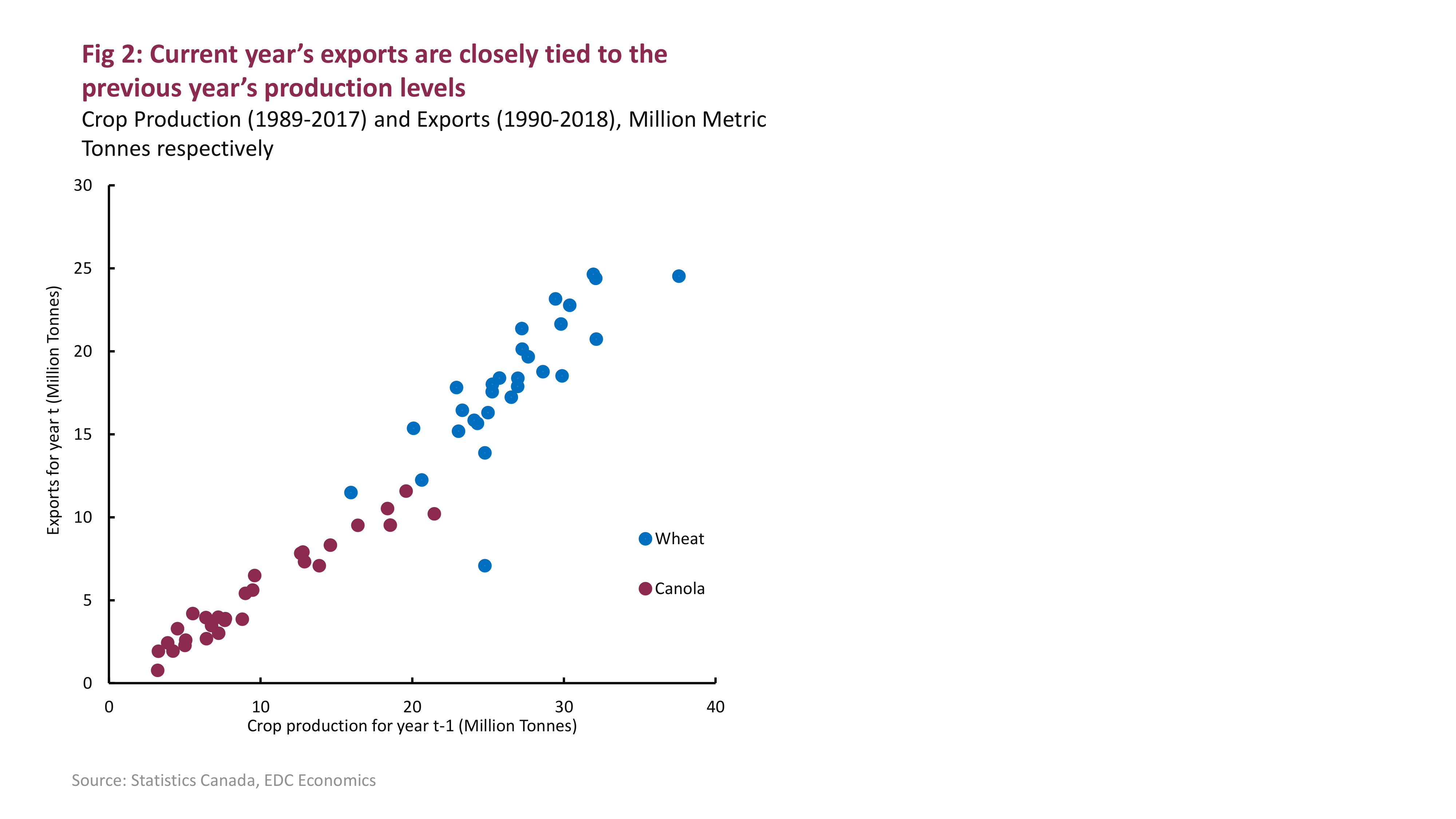 Extreme weather conditions have been a challenging consequence of climate change for the Canadian agri-food industry. During the 2021 growing season, Prairie farmers struggled with one of the worst droughts in Canadian history, causing crop production for our top agricultural exports to take a nosedive. Compared to 2020, production across all principal field crops decreased by 29 per cent (this amounts to a little over 27-million metric tonnes.) This production shortfall was more severe for crops such as wheat and canola (see Figure 1 above), which have accounted for at least 50 per cent of Canada’s total crop exports since 2009 and where Canada is a top supplier across the world.

What does this mean for Canadian agri-food exports in 2022? A quick analysis of Canada’s past data shows that the previous year’s production levels are closely tied to the current year’s exports, as demonstrated in Figure 2. With such a drastic drop in Canada’s production levels, next year’s markets that rely on high-quality supply of wheat and canola—such as China and the U.S.—may have to contend with a shortfall, along with potentially higher domestic prices for Canadians. Clearly, the Canadian agricultural sector is already feeling the impacts of climate change. Further occurrences of extreme weather events pose a considerable risk to the future growth of Canada’s agricultural exports. 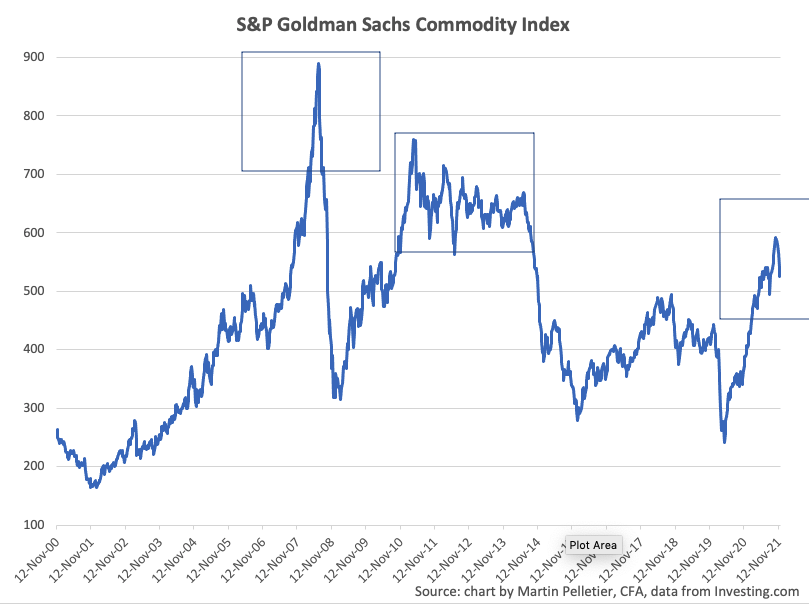 Commodity prices have been on a real roller coaster ride with a lot of attention given to the monster rally from last year’s COVID lows. That said, for some perspective, the index is up only eight to 10 per cent from its pre-COVID levels, as it has already started selling off over 10 per cent from its recent October highs over concerns of the Omicron variant.

While there has been so much talk around whether inflation is transitory or not, along with the Fed’s recent acknowledgement of higher prices, the fact of the matter is commodity prices are still well below where they were before the financial crisis and the period following its recovery. We believe the Feds know this, and aren’t in a hurry to raise interest rates, certainly not at this stage of the recovery.

As the world returns to a life that is learning to live with COVID, consumers are looking past Omicron, despite what politicians are saying, as a means to talk down prices further. The good news is we believe the current price environment is still conducive to supporting the economic recovery. Should the sell-off continue, we think one should look to add some inflation insurance into their portfolio by adding some broader commodity exposure.