Has enthusiasm for the CERB paved the way for a universal basic income? 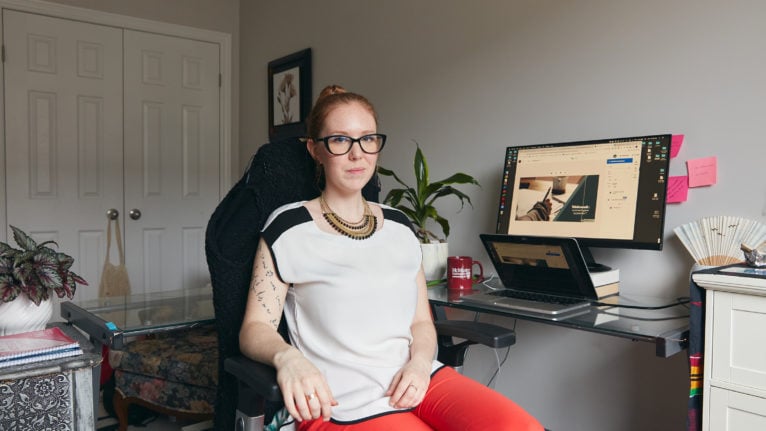 For a few all-too-fleeting years, Mark Taylor believed in the future of Alberta’s oil and gas industry. Armed with his petroleum systems engineering degree from the University of Regina, Taylor landed a job at a Calgary energy services company in 2011. The money was good, and the role was exactly what he had trained for. Then came the industry downturn in 2014. Oil prices plummeted and the inevitable followed: Taylor became a casualty of his employer’s second round of layoffs in January 2015.

The 47-year-old quickly filed away any hope for future employment in his industry. “Oil field services have taken a massive hit over the last five years,” he reflects. “If the producers aren’t drilling, then there are no opportunities for people to get back in.”

What followed was a flurry of self-reinvention for Taylor while he attempted to earn a living that could support his two children and pay his bills. He trained to become a leadership coach while on employment insurance (EI), then became the executive director of the Alberta Party, which styled itself as a centrist alternative on the provincial political scene. But after a crippling loss in the province’s 2019 election—the party failed to land a single seat in the legislature—his job was once again on the chopping block.

Back on EI, Taylor was finally able to gain part-time employment in March at a local community college, teaching Microsoft software. But he’d only been on the job for two weeks when COVID-19 made its way to Calgary. Classes were moved online and some students dropped out. Taylor found himself unemployed again, this time ineligible for EI due to his brief stint as an educator.

Then came Trudeau’s announcement of the Canada Emergency Response Benefit (CERB)—a “blessing,” Taylor says. The taxable, $2,000-per-month federal benefit for people whose incomes had been affected by the coronavirus pandemic was initially available from March 15 to Oct. 3, but Trudeau has since extended the benefit by eight weeks as economic uncertainty looms. A staggering 8.4 million Canadians—22 per cent of the country’s population—have applied.

For Taylor, the benefit enabled him to reconsider his path once again. This time, he began exploring a career in policing and has used his time during lockdown to get back into shape. He’s not the only one reinventing: Lauren Rennie of Hamilton, Ont., was also laid off from the education sector, where she worked as an international recruiter for new Canadian teachers looking for experience abroad in the United Kingdom. She says the CERB has enabled her to look into starting her own ESL tutoring business, which is set to launch in September, without having to worry about putting food on the table or paying rent.

Stories like hers and Taylor’s typify how the economic salve of the CERB has changed attitudes about income assistance as COVID-19 has exposed fragility in many facets of the Canadian economy, casting people out of work while leaving others desperate to transition out of struggling industries, like oil and gas. In doing so, it has reignited the slow-burning debate over a universal basic income (UBI), with advocates, workers and some economists arguing in favour of a minimum financial support to replace the CERB after the pandemic. The added safety net, say proponents, will help lift many out of poverty for generations to come.

Rennie thinks the idea’s time may have come because so many Canadians have seen first-hand how it can help them rebound after a crisis. “Living through something is what really solidifies an opinion,” she says, “and I wouldn’t have such a strong opinion for basic income if I hadn’t lived through this.” The growing support is reflected in polls: 62 per cent expressed support for a government-funded guaranteed income program in a May survey conducted by Toronto-based Public Square Research in collaboration with Maru/Blue. That number is a boost in comparison to a poll conducted by Concordia University and the Pierre Elliott Trudeau Foundation in 2013, where only 46 per cent of Canadians said they agreed with its implementation.

Hugh Segal, the former senator and Progressive Conservative political operative, is a long-time champion of basic income—partly due, he says, to growing up in a working-poor family. To Segal, the CERB has been a game-changer in demonstrating how a uniform income safety net can be done quickly and efficiently through the Canada Revenue Agency; it provided rapid relief, without bureaucratic hoops, for those who woke up one day with no job.

The demonstrated need for the CERB, and the swiftness with which it was rolled out, could pave the way for a more permanent program as the nature of work changes due to the pandemic, he says, adding: “The long-term, 25-year job in a company that you get after you graduate is really no longer part of our economic circumstance.”

Segal envisions a base income for adults between the ages of 18 and 64 who find themselves in need for a wide array of reasons—their jobs pay below the poverty line, say, or they are freelancers riding the crests and troughs of the gig economy. It would allow many in Canada to get by, he argues, especially those who live in rural areas or Indigenous communities, where the poverty rate is significantly higher than the national average.

He also argues the benefits would carry through to the health-care system. “We know from the COVID experience that people who are low-income get sick sooner, are more susceptible to disease and end up in the hospital quicker,” Segal says. “All of those things cost us a huge amount of money.”

The trickle-down effects were at least partly substantiated by a basic-income pilot project run in the 1970s in Manitoba. The experiment was shut down after five years by then-premier Sterling Lyon and the Progressive Conservatives of Manitoba in 1979, and no official report was commissioned on its results. Yet subsequent studies by the University of Manitoba showed hospital visits decreased in participating communities by 8.5 per cent. A similar pilot project in Ontario, championed by Segal, was shut down after a year by the government of Premier Doug Ford. Its outcomes, too, were left unexamined.

The idea of basic income is, of course, not without critics. A 2013 academic study by current federal Treasury Board president Jean-Yves Duclos found a proposed minimum-income program for Quebec “would have strong negative impacts on labour market participation rates, and mostly so among low-wage workers.” It’s also expensive. An estimate from Canada’s Parliamentary Budget Officer says six months of basic income could cost the government between $47.5 billion and $98.1 billion, a price tag that might shake Canadians’ newfound enthusiasm. A recent Angus Reid Institute poll also found that, while six out of 10 respondents supported a UBI, a slightly greater portion, 64 per cent, was unwilling to pay more in taxes to fund it. (Segal counters that a federal basic-income program would also provide $20 billion in relief by replacing existing provincial welfare programs.)

Meanwhile, Andrew Scheer, outgoing leader of the Conservative Party, has expressed concern that the CERB is deterring people from returning to work. “This failure must be reversed before it is too late,” he said in May. “Canada’s economic recovery depends on it.”

Such fears are not without basis, says Dan Kelly of the Canadian Federation of Independent Business, which represents around 110,000 small and medium-sized businesses in Canada. The organization conducted a survey of its members in which 37 per cent said they have concerns related to staffing, including their employees’ refusal to return to work. “My view is that it’s going to be a messy recovery, because there’s all sorts of reasons why employees won’t be going back to work,” Kelly says, citing lack of access to child care and fears of catching COVID-19. “We spent three months telling every Canadian not to leave their house except for a weekly trip to the grocery store. So it’s an abrupt shock to the system.”

In the face of these challenges, the CERB has done the opposite of persuading Kelly of a need for a basic income. “Our early experiment with this suggests that a universal basic income would mean the elimination of a motivation to work,” he says. It would be a mistake, he adds, to turn Canada’s social safety net on its ear because of shortcomings during the exceptional circumstance of a pandemic.

Kelly believes a rapid and robust wage subsidy program is a better approach to dealing with long-term work disruption, allowing employers to keep staff on payroll, and to get them back on shift quickly when the economic hardship passes.

Still, the shock of the pandemic—and the economic upheavals before it—has led a growing number of Canadians to experience a close brush with poverty. And that may slowly but surely change minds. Taylor acknowledges that, not long ago, “being a downtown Calgary oil and gas engineer,” he would have seen the CERB as a cash grab of taxpayer dollars. But that was a different time.“Fast-forward five years, having been laid off three times and looking at what the Alberta economy is going to look like in the next five years,” Taylor says, “I’m much more of a supporter.”

This article appears in print in the August 2020 issue of Maclean’s magazine with the headline, “A floor for soft landings.” Subscribe to the monthly print magazine here.