How the Trans Mountain pipeline became a political dumpster fire

Internecine party squabbles, centuries' worth of broken promises to First Nations and the country's nastiest rhetorical swill: that's a lot for one pipeline to carry 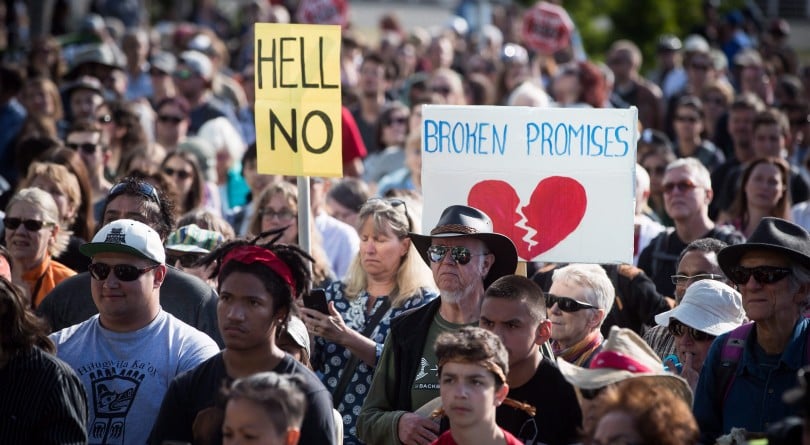 People listen during a protest against the Kinder Morgan Trans Mountain Pipeline expansion, in Vancouver, on Tuesday May 29, 2018. The federal Liberal government is spending $4.5 billion to buy Trans Mountain and all of Kinder Morgan Canada's core assets, Finance Minister Bill Morneau said Tuesday as he unveiled the government's long-awaited, big-budget strategy to save the plan to expand the oilsands pipeline. THE CANADIAN PRESS/Darryl Dyck

Chris Turner is a Calgary-based writer who focuses on energy and climate change. His latest book is The Patch: The People, Pipelines, and Politics of the Oil Sands

Ever heard of the Alberta Clipper? Unless you work in the pipeline business, odds are likely high that you haven’t. The Alberta Clipper is a 1,600-kilometer pipeline that carries 450,000 barrels of Alberta’s oil per day from the Prairie shipping hub of Hardisty to Superior, Wis. Enbridge Inc. applied to the National Energy Board to build the Canadian leg of the pipeline in May 2007; there were 31 interveners at the project hearing—a dozen oil and gas companies, about the same number of First Nations, a handful of unions—and it was approved in early 2008. Construction began later that year, and it began shipping oil in the fall of 2010.

In September 2009, midway through the build, the Regina Leader-Post ran a short feature on the Alberta Clipper, referring to it as an “invisible megaproject.” This was a paraphrase of a quote from an Enbridge executive in the story: “It’s the biggest project nobody knows about.” Understand: this pipeline company rep was, as the kids say, humblebragging—lamenting the lack of hype, wishing more was being said about his underexposed megaproject.

But that was a decade ago, in a long-gone era in pipeline politics, when Conservative environment ministers still touted their “Turning the Corner” climate plans and the federal NDP ran radio ads attacking carbon taxes as dangerously unknown in their consequences. Back in those days, you could even hear a young firebrand MP from northern British Columbia by the name of Nathan Cullen telling the Canadian Press how disappointed he was that plans weren’t progressing faster for that Enbridge pipeline to Kitimat.

As the news broke this week that the Federal Court of Appeal had quashed the federal government’s approval of the Trans Mountain Pipeline Expansion, it was hard to even imagine a time when the biggest problem a pipeline spokesperson had was a lack of attention. How did pipelines move so quickly from the invisible margins to the red-hot, lead-story mainstream of Canadian affairs? And how did one project—a line running alongside an existing pipeline route at that—become the repository for the entire nation’s most acrimonious politics?

READ MORE: The Liberals own the Trans Mountain court loss as surely as they own the pipeline

The full answer requires digging a bit further back than the current court decision and this spring’s family feud between the NDP governments of B.C. and Alberta. It’s worth unearthing, though, because if Canada is to find its way back to a place where energy and climate policy goals can actually be pursued in a timely way—as dim a prospect as that might seem right about now— we need to understand how the Trans Mountain debate became so intractable.

When Kinder Morgan first announced its plans for the Trans Mountain expansion in 2012, the company probably anticipated a path to completion that looked something like the Alberta Clipper’s. Sure, TransCanada’s Keystone XL had become a political flashpoint that was making bitumen an international byword for climate catastrophe in some circles. But Trans Mountain had an existing right of way, eager industrial partners, and the staunchest of allies in Edmonton and especially Ottawa. A real no brainer, right?

In pipeline politics, though, it turns out there can be such a thing as too staunch, even way too staunch—and that was the Conservative government of Stephen Harper in 2012. Peeved at the opposition to Keystone XL and President Obama’s decision to delay ruling on the pipeline until after the 2012 election, Harper’s Conservatives went into rabid attack mode, ploughing over resistance to oil sands expansion with a zeal that seemed almost gleeful. The year began with an open letter from Harper’s natural resources minister painting pipeline opponents as “foreign special interest groups” pursuing a “radical ideological agenda.” In a pair of omnibus budget bills, the rhetorical attack grew real teeth—environmental groups, particularly those on the West Coast, were targeted with Revenue Canada audits through funding earmarked for the purpose; and the bills recklessly rewrote and gutted the policy regime responsible for environmental oversight of resource projects. The nationwide Indigenous resistance movement that came to be known as Idle No More was initially a direct response to the loss of environmental protections in the second of those omnibus budget bills.

RELATED: Why oil sands protesters and companies both get it wrong

By 2013, as Kinder Morgan’s Trans Mountain application landed at the National Energy Board, there existed something akin to open war between the Harper government and pipeline opponents of all stripes. This, in retrospect, might well have been the point of no return. From then on, interveners by the hundreds flooded NEB hearings on Tran Mountain and other proposed pipelines. Protesters lined up to be arrested as Kinder Morgan began site preparation for its new oil terminal in Burnaby in the fall of 2014. Opposing oil sands pipelines was now a litmus test of a government’s environmental bona fides, especially in B.C., while supporting the same projects became a prerequisite for a government’s commitment to the health of the whole Canadian resource economy. Around the same time, a landmark Supreme Court decision handed First Nations full title to their unceded lands for the first time ever. From here, there was no obvious route back to megaproject invisibility.

Even as political landscape changed radically in 2015—first with the stunning election of Rachel Notley’s NDP in Alberta, then with the arrival of Justin Trudeau’s “sunny ways” in Ottawa—the entrenchment and distrust of the Harper years could not be fully converted into compromise and collaboration. Sunny ways did hold sway for a time—it now seems a brief ceasefire—as Trudeau’s team took a lead role at the Paris climate talks and muscled everyone but Brad Wall into a federal-provincial climate plan. That it was by far the most ambitious climate policy package the nation’s ever seen was not enough to keep the sun shining, though—not after the approval of the Trans Mountain expansion in the fall of 2016. To pipeline opponents who’d been targeted by the previous government, this was not the difficult compromise needed to maintain that fragile climate consensus, but a complete betrayal. To many Indigenous people in B.C., it was a “same as the old boss” moment.

Unsurprisingly, the election of a new B.C. government last year, formed through the cooperation of the NDP and Greens, further polarized the Trans Mountain debate, and the rhetorical battle was soon torqued beyond even the Harper days. Now we had wine import bans and “turn off the tap” threats and alarmingly casual talk of constitutional crisis. Trans Mountain’s project was going to nullify the Paris climate agreement and kill the entire Salish Sea dead, or else it was going to fail and usher in the wholesale collapse of the Canadian economy.

And then it was bought by the federal government. And then the courts said the deal was off. And so here we are, finding it hard to remember the last sunny day in Canadian politics.

Calgary Mayor Naheed Nenshi, commenting on the uproar over Keystone XL, wondered once why a single pipeline has been “asked to bear all the sins of the carbon economy.” It’s a fair point—and Trans Mountain has been asked to carry not just all the world’s climate sins but an entire country’s nastiest rhetorical swill, from the internecine squabbles of neighbouring NDP governments to the accumulated gunk of decades of federal-provincial jurisdictional spats to hundreds of years of empty promises to Canada’s Indigenous peoples.

Maybe it’s better, then, to imagine the Trans Mountain expansion not as a sin-bearing pipe but as an industrial-sized dumpster. Imagine it squatting there, perhaps next to a construction site in Burnaby—one of those on-again, off-again projects where the chainlink and piles of dirt begin to seem like fixed features on the landscape and no one’s sure will ever be finished. Meanwhile, the dumpster has filled steadily with Canada’s ugliest political garbage, to the point where it spills over the rim of the thing. And now a Federal Court of Appeals ruling has set it all alight.

In the weeks to come, as politicians, activists and spokespeople from every political party and organization with a stake in the project strike their postures of triumph and support and opposition, we should bear in mind that they are all standing in front of this raging garbage fire. And at present, none of them has presented any solid plan for how to put it out, regardless of whether construction of this pipeline or any other moves ahead.

The court has, in effect, told us to stop filling the dumpster with more trash and go have real conversations about Indigenous rights and environmental stewardship and energy policy, which taken together amount to a conversation about what kind of country Canada intends to become. Perhaps we could begin with general agreement that we would all benefit from fewer dumpster fires.