If the economy is so great, why do we feel so bad?

By most measures, Canada's economy is rocking. Politicians are making it worse. 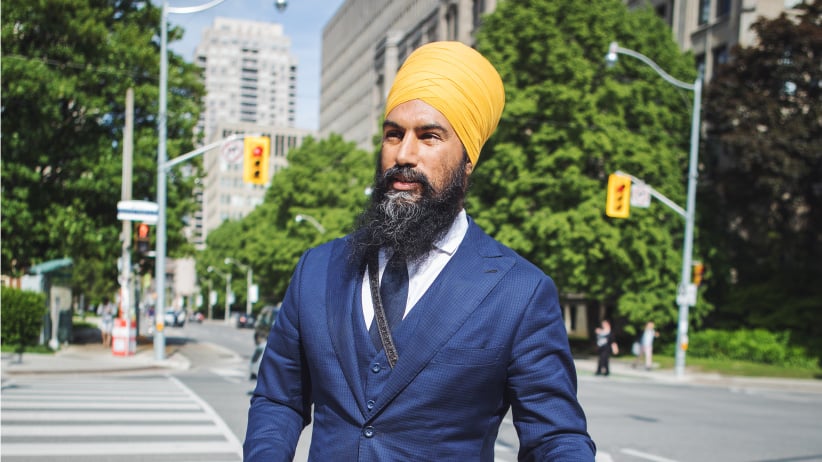 On paper, it’s the best of times, but you won’t hear politicians telling Canadians that.

Canada’s economy has been unambiguously strong for about a year, according to the high-frequency data Statistics Canada collects every month. Gross domestic product will probably expand by at least three percent this year, something that some economists thought our aging and relatively unproductive economy might never do again. The unemployment rate (6.2 per cent in August) is about as low is it ever gets, and could push lower still. The median household income in Canada is about $70,000, roughly 10 per cent more than a decade ago, according to census figures released last month. That’s an excellent number, considering household wealth in the United States barely grew over the same period.

A question then: why exactly are we so negative?

There’s a bad vibe out there despite all those good numbers. By way of example, the Bloomberg Nanos Canadian Consumer Confidence Index is at its lowest level since July. Bloomberg, the New York-based news and information company, reckons the decline had something to do with the Bank of Canada’s decision to raise interest rates, which compounded anxiety over the cost of housing.

Higher borrowing costs aren’t necessarily a bad thing. The central bank chose to raise its benchmark rate twice this summer because the economy was doing so much better than it thought it would be. That meant policy makers had to move sooner than expected to stay ahead of inflation. Yet consumers aren’t especially good at putting the greater good of the economy ahead of their own circumstances. Nanos Research, which conducts a weekly survey for Bloomberg, found that almost a quarter of respondents at the end of September said their personal financial situation had worsened over the past year, compared with about 20 per cent in early August.

That’s a high number for an economy that is flirting with record levels of employment. It suggests the weight of a record level of household debt is starting to feel heavy.

Let me posit another cause of the disquiet: the steady stream of public service announcements from Ottawa about how badly we’re doing.

The main political parties are heavily invested in narratives that derive their tension from economic pain. Data that suggest Canada is one of the world’s stronger economies complicates those stories. So the politicians just kind of ignore the evidence and carry on talking like Canada is on the verge of a recession. And since more people are informed by the front section of the paper or their Facebook filter bubbles than they are by the business pages, the politicians end up setting the tone.

The Prime Minister and his finance minister spend much of their time reminding the country’s biggest vote bank—the middle class—that it is not doing as well as it should be. Conservative leader Andrew Scheer’s most consistent message during his relatively short time as a national figure is that the country is about to go broke. And how about this uplifting message from Jagmeet Singh after he won the leadership of the New Democratic Party on the weekend: “At a time when people are feeling so despondent, when there is a lack of hope, when it feels like things will only get worse before they get better, Canadians must stand united and champion a politics of courage to fight the politics of fear.”

What’s a person supposed to think if the only thing on which his or her elected representatives agree is that the economy basically sucks?

That’s a rhetorical question. An actual question relates to what is driving the political class to frame the economy in such a negative way. Are the parties simply preying on our post-crisis anxieties, or might their research and networks be telling them that the fastest growing economy in the Group of Seven nations is fundamentally flawed?

The odd reluctance of Prime Minister Justin Trudeau’s government to take credit for this year’s burst of economic growth suggests a lack of confidence in Ottawa that the good times will last. Officials from the government shared their concerns about higher interest rates with a Bloomberg reporter, violating the convention of keeping politics out of the day-to-day handling of monetary policy. One reason to proceed with such an obvious indiscretion would be to send a message that future economic weakness would be the Bank of Canada’s fault, not the prime minister’s.

Canada’s hot streak certainly will cool. It’s already happening. After touching a record in May, exports declined for three consecutive months through August, losing more than 10 per cent of their value, StatsCan reported on Oct. 5.

The decline reflects some things that are out of the government’s control (international demand, the exchange rate) and some things that arguably the Prime Minister could do something about, namely Canada’s chronic lack of competitiveness. To be sure, Trudeau is trying to transform Canada into a bigger player in global markets, accelerating the previous government’s efforts to gain access to fast-growing economies in Asia and South America. Even if this approach works, it will take time—more time, likely, than exists between now and the next election campaign. That means there is an incentive to keep expectations low, and to look for scapegoats, just in case voters are feeling no better in 2019 than they were in 2015.

Canada’s economy has other serious flaws. An extended period of weak business investment means there is a risk the country will struggle to keep up at a time of economic upheaval. Much of the growth in recent years has come from household spending, which must slow eventually because so much of that spending was done on credit. Wages are barely keeping up with inflation, and oil prices have settled at a level that is unlikely to generate the kind of economic activity to which we had become accustomed before the 2014-15 crash. Income inequality threatens social cohesion and political stability.

Still, we should be wary of talking ourselves into an economic slump.

READ: What higher interest rates mean for real estate, debt and the economy

Headlines matter. Bank of Canada Governor Stephen Poloz worried a year ago that negative feedback loops were blocking executives from hiring and investing. “When people see good news, it causes them to look at their own good news in a more reinforcing way,” he said. His point: global economic data suggested strength, yet all recession-weary business leaders and investors could talk about was weakness and uncertainty. “Animal spirits tend to be contagious,” Poloz said.

If that’s true, then Canada’s politicians are doing nothing to help ensure the turn in the country’s economic fortunes this year takes hold. The summer started with a reasonable (if clumsy) attempt by the government to stop incorporated individuals from taking advantage of the lower small-business tax rate, and ended with people such as Arlene Dickinson, the investor and Dragon’s Den star, talking about an assault on entrepreneurship. The opposition did its best to encourage this outcry, helping their own poll numbers—but doing nothing for confidence in an economy that was doing surprisingly well.

There is a reason all three political parties are talking down the economy: they sense weakness. This means the government will resist taking ownership of economic growth that could fade, while the Conservative and New Democratic parties will continue to exaggerate the weaknesses. It makes for strange discourse. Try not to let it get you down.