Is B.C.'s plan for first-time homebuyers as crazy as it sounds? 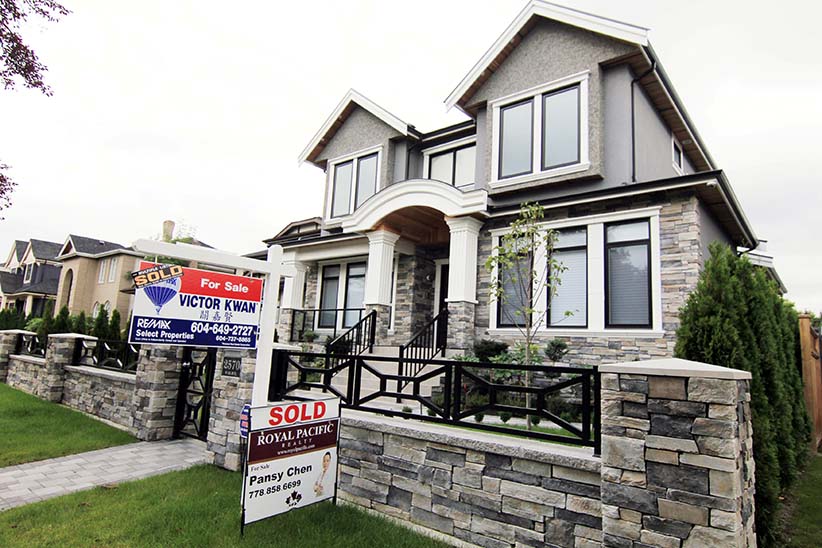 Realtors’ signs are hung outside a newly sold property in a Vancouver neighbourhood where houses regularly sell for $3-4 million (US$2.7-3.6 million) on Sept. 9, 2014. (Jim Tanner/Reuters)

B.C. Premier Christy Clark got an earful last week when she announced a plan to subsidize down payments for first-time home buyers. In a move seemingly designed to secure votes in next year’s provincial election, Clark’s government promised to match the funds saved up by eligible buyers up to $37,500, or five per cent, of their home’s purchase price. Better yet—or worse, depending on your point of view—the loans, secured as a second mortgage, are structured so they will be payment- and interest-free for five years.

Their argument runs as follows: it will further drive up Vancouver’s nosebleed prices because there’s already insufficient housing supply to meet demand; it will cost the government around $850 million over three years (a burden that could fall on taxpayers); and it works against recent federal initiatives to rein in borrowing by tightening mortgage lending rules.

Yet, while you can certainly question Clark’s timing and political motivations, the notion of governments helping buyers come up with a down payment on their first home is hardly the definition of insanity. “I don’t think it’s obviously more crazy than a mortgage interest deduction,” says Eric Zwick, an assistant professor a the University of Chicago’s Booth School of Business, referring to the longstanding U.S. policy of allowing homeowners to deduct the interest paid on mortgages from their taxable income.

While Zwick is generally skeptical of government programs that subsidize housing purchases—he calls them “regressive” because they mostly benefit the wealthy at the expense of the poor—he says the most convincing case for intervention can probably be made for first-time buyers who need help amassing a downpayment. In pricey cities like Vancouver, Zwick argues would-be homeowners are, in many cases, already spending enough in rent to cover a mortgage and other housing costs, including property taxes and utilities (assuming they’re fortunate enough to secure a rental property in the first place). Hence, the only thing separating these people from home ownership is the capacity to save up for a down payment. But that’s a particularly tall order in Greater Vancouver, where $320,000 is needed to put a “standard” 20 per cent down on the average detached house. “There’s a cost to acquiring that 20 per cent down payment, especially if it’s a big number as a share of a person’s income,” says Zwick. “It might be large enough to prevent a person from enjoying home ownership altogether.”

The question, says Zwick, is whether this represents a failure of the credit markets—and is therefore worthy of government intervention. There’s little doubt that a substantial down payment may be necessary to reduce a lender’s risk in certain cases. But in many others, it’s often little more than a token gesture—particularly for buyers who have steady jobs and healthy future earning potential. “It basically says to a bank, ‘Look, I’m prepared to lose some money before you lose anything,’ ” Zwick says. “It’s a signal of commitment and ability to pay the monthly [obligations].” But there are other ways for lenders to manage that risk that don’t put such a heavy burden on first-time buyers, argues Zwick. They include better income verification and more familiarity with local real estate markets.

There is, of course, a downside to lowering the housing market’s barriers to entry: first-time buyers are at increased risk of biting off more than they can chew. This is certainly a legitimate concern with the B.C. program, which threatens to leave participants owing money to both the province and the bank. And how many homeowners will be caught in a bind five years from now—at a time when mortgage rates could be higher than today— when their payments to the B.C. government, plus interest, finally kick in?

Others worry that B.C.’s plan is reminiscent of the ultra-loose lending policies that precipitated the U.S. housing crash. But Zwick, who has studied the U.S. subprime mortgage debacle, isn’t convinced. “A lot of that came from people who were not actually planning to live in those houses, but were speculating in the real estate market and then walked away when house prices turned,” he says. B.C.’s program, by contrast, is only available to buyers who live in the home they purchase for at least five years (other rules stipulate that participants can’t spend more than $750,000 on a house, which doesn’t go far in Vancouver, and can’t earn more than $150,000 per household annually). Equally important, all participants must already qualify for a high-ratio mortgage that’s backed by CMHC insurance, meaning they are people who could have purchased the homes without B.C. taxpayer help. This is why Clark argues the B.C. program won’t further inflate housing prices, although that’s probably misleading since program participants could have an incentive to spend more in the knowledge that their monthly payments will initially be lower.

The outcry over B.C.’s plan ignores another important reality: governments, whether motivated by economic considerations or purely political ones, are already falling over themselves to give novice home purchasers a helping hand. “Ample support already exists for first-time buyers,” warned Evan Siddall, the president of Canada Mortgage and Housing Corp., during a recent speech in Vancouver. “Too much encouragement to buy homes exposes vulnerable people to excessive financial risk, pushes prices higher where acute supply inelasticity exists—like here in Vancouver—and jeopardizes our economic prospects.”

Siddall should know. The CMHC is arguably the biggest enabler for first-time buyers entering the housing market. Thanks to its federal taxpayer-backed mortgage insurance program (mandatory for buyers with less than a 20 per cent downpayment), banks and other lenders are prodded to issue mortgages to Canadians who put as little as five per cent down on their homes. But it’s far from the only government agency that offers such incentives. Several provinces and cities offer tax breaks to those buying their first home. Ontario, for example, recently revealed plans to double the province’s land-transfer tax refund for first-time buyers to $4,000 after Jan. 1, 2017 (B.C. also offers first-time buyers a land transfer tax refund). The federal government, meanwhile, continues to allow individual first-time buyers to borrow up to $25,000 from their RRSPs to help fund the purchase or construction of a new home—even as it frets about rising levels of Canadian household debt and insufficient retirement savings.

None of this is to say B.C.’s loan program is a smart policy—only that there’s a potential economic argument for helping first-time buyers with down payments, and that the scheme has plenty of company. Zwick, for one, isn’t convinced government incentives have a huge impact on home prices, anyway. Rather, he blames the affordability crisis in cities like Vancouver on a lack of sufficient new home construction—either because of geographical or land-use restrictions that prevent developers from building out or up. If governments are serious about reining in house prices, in other words, they need to make it easier for developers to build more homes. There’s just one problem, says Zwick: ” [Existing homeowners] generally don’t want that because they benefit from prices going up.”