Trudeau: 'No country would find 173 billion barrels of oil in the ground and just leave them there' 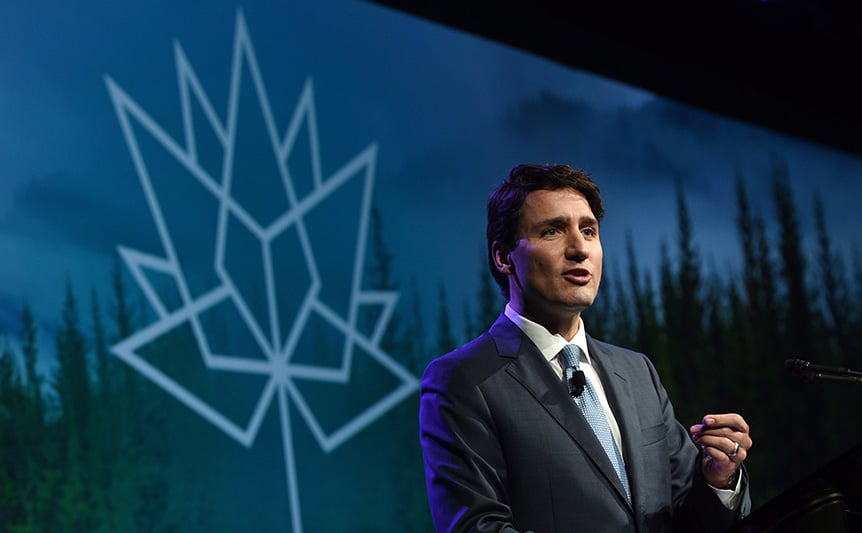 For the record, a transcript of Prime Minister Justin Trudeau’s keynote address at the CERAweek Global Energy and Environment Leadership Award Dinner in Houston, Texas:

Bonsoir, mes chers amis. Good evening. Thank you, Dan, for that kind introduction and thank you all for being here. To the many policymakers and industry leaders here today, thank you. And of course to the organizers of CERAW week, thank you so much for this award. It truly is an honour for me personally, for Canada’s superb Natural Resources Minister Jim Carr who’s been here all week.

And for the Government of Canada and the people of Canada who elected us.

I’d like to begin with a little family history, if I may. You may have heard that my father, Pierre Elliott Trudeau, was also Prime Minister of Canada back in the 70’s and early 80’s. In 1980, I was in my prime Star Wars years, at nine or so, so politics was not the first thing on my mind.

But that year, my dad’s government introduced a policy called the NEP, the National Energy Program. It lasted until 1985 and it didn’t work. It was a failure. It didn’t mean to be, but it ended up being the wrong policy at the wrong time.

MORE: The A to Z of the oil crash

Now I’m not being disloyal when I say this. It’s just a historical fact. The NEP introduced a level of state control over energy that hurt growth and jobs. It became hugely controversial. Consequently, when I began my run for the leadership in 2012, 30 years later, the Trudeau name was mud in Alberta, still.

A Trudeau, it was said, could not get elected dog-catcher in Alberta.

But here’s the thing. I knew that there is no path to prosperity in Canada that does not include a thriving, vibrant energy sector, both traditional and renewable. I knew that our resource industries provide thousands of well-paying, middle-class jobs not just in Alberta but across Canada and around the world including, of course, here in Texas.

The Enbridge Spectrum merger, which creates one of the largest energy infrastructure companies on the continent, is only the most recent example of an extraordinarily productive partnership. Last year alone, Texas trade with Canada was worth $35.1 billion. Texas exports to Canada worth nearly $20 billion. Imports from Canada, $15 billion. That translates into thousands of good Texan jobs, my friends. By our reckoning, 460,000 jobs.

MORE: Life at $20 a barrel: What the oil crash means for Canada

And the ties between our two countries are economic but also strategic. This is the most successful economic relationship in the world, supporting millions of middle-class jobs on both sides of the Canada-U.S. border. Canada buys more from the United States than it does from any other country. We are the number one customer of two-thirds of U.S. states and in the top three for 48 different states. Nothing is more essential to the U.S. economy than access to a secure, reliable source of energy, and Canada is that source.

We have the third largest oil reserves in the world, and provide more than 40 per cent of America’s imported crude. And this extends well beyond oil. We supply you with more electricity and uranium than any other country, too.

My point is just this: all Canadians, cold weather dwellers that we are, get the importance of energy. So to emphasize that, immediately upon launching my leadership campaign, I went to Calgary, Alberta. I think quite a few people including quite a few of my own party thought I was crazy. But guess what? A little over four years later, with a number of strong Trudeau Liberals elected across Alberta, we’re on our way to getting three new pipeline projects under way, which will help connect Canada’s oil patch with energy markets around the world.

The first, Kinder Morgan’s Trans-Mountain line, will run from Alberta across the Rockies to the Pacific. The second, Trans-Canada’s Keystone XL pipeline, recently approved by President Trump, will ship Canadian crude to refineries here, in Texas.

These ambitious projects will go a long way towards ensuring North American energy security for years to come. I make no bones about it. We’re very proud of this. It’s progress. It’s important. As I said on the very first trip to the oil patch back in 2012, no country would find 173 billion barrels of oil in the ground and just leave them there.

The resource will be developed. Our job is to ensure that this is done responsibly, safely, and sustainably. Which brings me to the second piece, equally critical. While developing our resources for the economic benefit of Canadians, we must also look to the future.

MORE: Fly the full length of the Line 3 pipeline route

Now what I just said was…

… there will come a day, far off, but inevitable at some point, when traditional energy sources will no longer be needed. In preparing for that day, we have two critical responsibilities. One is to sustain the planet between now and then so we can pass it on to our children better than we found it. And the second is to get ahead of the curve on innovation.

And we in Canada are doing just that. Canadian companies are leaders in developing technologies such as carbon capture and storage, next-generation biofuels, advanced batteries for electric cars and cleaner oil sands extraction processes, among other advances. This creates good jobs and it also helps the planet.

Here’s the crux of it. In Canada, as I said, we know all about preparing for winter and for the long cold nights. So when we go camping—and we do love to camp, that particular stereotype is totally accurate…

… when we go camping we light our campfires before the sun goes down. And that doesn’t mean we’re anti-daylight.

So it’s exactly the same with energy. Innovating and pursuing renewables isn’t somehow in competition with those traditional resources. It’s common sense. It’s wise preparation for the future. Our children and their children deserve no less.

All of which brings me full circle. We would not be on this path, not even close, had we as a government not insisted that environmental protection and resource development go hand-in-hand. Our immediate predecessors tried a different route for 10 years—to ignore the environment. It didn’t work any more than the NEP of the 1980s worked. They couldn’t move forward on big energy projects. Our predecessors failed because in the 21st century Canadians will not accept that we have to choose between a healthy planet and a strong economy. People want both, and they can have both. It takes compromise. It takes hard work, but it is possible.

The proof that we have to combine and we can combine environment and economy is that little more than a year into our first term of government, we have made progress both on pipelines and on a national carbon reduction plan which finally puts a price on carbon pollution.

And this was worked out in cooperation with our provinces. It’s a first step and more work needs to be done, but it is a clear, new path for our country after years of false starts. And let me be very clear. We could not have moved forward on pipelines had we not acted on climate. And we could have not acted on climate had we not also focused on jobs, that is on the needs of the Canadian people, especially those of the middle class and those working hard to join it.

We are showing not only that it can be done but that it must be done, that this is the way forward that all of our citizens expect. And that’s why, my friends, I am so very pleased and honoured to receive this award tonight. We are showing that environmental leadership and economic growth are inseparable, that they must go together. And today, because of this award, people around the world will take notice and hopefully join us on the path to a brighter future.