Mark Carney on the hot seat 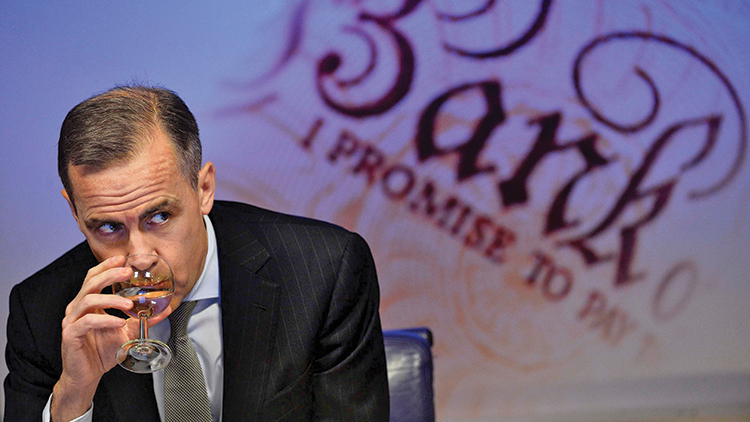 In his second-last speech as Bank of Canada governor, Mark Carney touted Canada’s success with what he called “forward guidance.” As esoteric as the term may be outside of corporate boardrooms, among central bankers forward guidance has become Carney’s trademark invention, and is credited for much of the country’s strong economic performance throughout the financial crisis.

In 2009, Carney broke with central bank tradition, which typically offers only vague pronouncements of where interest rates might be headed in the future, and laid out a specific timeline, promising to hold rates at near-zero for 15 months. The tactic was credited with boosting the confidence of consumers and businesses to borrow and spend, knowing that interest rates were guaranteed to stay low for more than a year. “It worked because it reached beyond central bank watchers to make a clear, simple statement directly to Canadians,” Carney told an audience at the University of Alberta last May.

Canada’s star turn during the Great Recession earned Carney the nickname of “rock-star central banker.” It also caught the eye of George Osborne, Britain’s chancellor of the Exchequer, who tapped Carney to head the Bank of England, where his forward guidance policy became known as “the Carney Rule.” The job of trying to shore up the U.K.’s embattled financial sector and kick-start an economy still stuck in low gear was no easy task. To achieve such an economic miracle, Carney hinted in his speech in Edmonton that he was turning his attention to something he called “third-generation forward guidance,” in which a central bank would promise not to raise interest rates until unemployment fell below a certain threshold. If it worked, it would effectively shift the role of a central bank from passive guardian of the economy, through controlling inflation, to an active job-creation machine. In Carney’s words, it would help the bank “anchor inflation expectations and retain credibility.”

But as Carney undoubtedly knows by now, what works in Canada doesn’t always succeed across the pond. Earlier this month, less than a year after taking up the job, Carney was forced to abandon his forward-guidance policy under intense criticism from the financial sector and after the British economy proved far more resistant to his messages than expected. Carney had pledged to hold rates low until U.K. unemployment hit seven per cent, something the bank said wouldn’t occur until 2016. But the country’s unemployment rate has dropped much faster than expected and now hovers around Carney’s target. That might seem like good news, except that labour analysts point out that most of the job growth has been in low-wage, part-time work. Wages have barely budged and labour productivity has remained disturbingly ?at. At the same time, inflation has been stuck above the bank’s target and the country continues to grapple with a trade deficit, a struggling manufacturing sector and an overheated housing market. In short, the unemployment rate has proven to be a terrible measure of the state of the British economy and far more difficult for the central bank to control compared to inflation.

“Mr. Carney’s revolution has expired,” London’s Financial Times declared in an editorial earlier this month after Carney said the bank would no longer peg future interest-rate changes to unemployment. Instead, he announced the bank would monitor a broad concept he called “spare capacity” in the economy, which the British press quickly dubbed “fuzzy guidance.” Analysts pointed out that by abandoning forward guidance, central bank communication was reverting to the status quo of being vague and non-committal, a major setback for a man tasked with overhauling an institution known as the Old Lady of Threadneedle Street. “It’s no good bringing Canadian assumptions with you and supposing they will work in the U.K.,” financial consultant Richard Hobbs told journalists. “It doesn’t matter who you are or how good you are, markets confound you.”

In hindsight, Carney would have been wise to heed a particularly prescient warning by the Confederation of British Industries, the country’s largest business lobby group, issued the month before his arrival in London. Calling unemployment a “fickle indicator,” the group warned that if Carney was wrong, “the bank could be required to backtrack on its guidance, with the likely consequence of reduced credibility, and as a result, less scope to operate monetary policy flexibly in future.”

The Bank of England is not alone in declaring forward guidance a failure. The U.S. Federal Reserve backtracked on its 6.5 per cent unemployment target after joblessness fell faster than expected—not because companies are hiring, but, analysts say, because millions of Americans gave up on looking for work. Canada, too, has quietly moved away from forward guidance under new governor Stephen Poloz. The bank dropped detailed projections of future interest-rate movements from its quarterly policy statements in the fall after Poloz called it “a distraction?.?.?.?I would rather have forward guidance used as a tool when you are trying to do something extra, beyond explaining your forecast,” he told reporters in November.

Still, despite being forced to abandon his signature policy, the episode may prove a minor setback for Carney, coming so early in his five-year term. Since announcing the end of forward guidance, the British economy has witnessed a series of positive surprises. Inflation, which had been stubbornly high, fell back into the bank’s target range of two per cent. The pound sterling rose to a three-year high, evidence the country’s growth is close to what Carney has dubbed “escape velocity.” In response, the Bank of England upgraded its 2014 growth forecast for the country to a healthy 3.4 per cent.

Carney’s supporters call the recent bout of economic good news “the Carney Effect.” Others are far more skeptical about the financial whiz kid from Canada. “It turns out the real way he can distinguish himself is luck,” former British chancellor Nigel Lawson told a London conference recently. “He is a lucky man and his timing is impeccable.”

The British economic recovery is still fragile and faces many of the same problems Carney seemed unable to solve during his tenure in Canada: sluggish labour productivity, businesses that are stockpiling cash, and a property bubble that seems at risk of bursting. With that in mind, Carney’s propensity for experimenting with new tools to keep interest rates down in order to grease the wheels of a recovery might end up doing more harm than good. “If, at the end of his five-year term, Mr. Carney has only succeeded in generating another unsustainable consumer boom, then no one’s going to thank him for it,” wrote Telegraph columnist Jeremy Warner.

For Carney, that could mean the difference between having the legacy of a rock-star central banker, or a one-hit wonder.