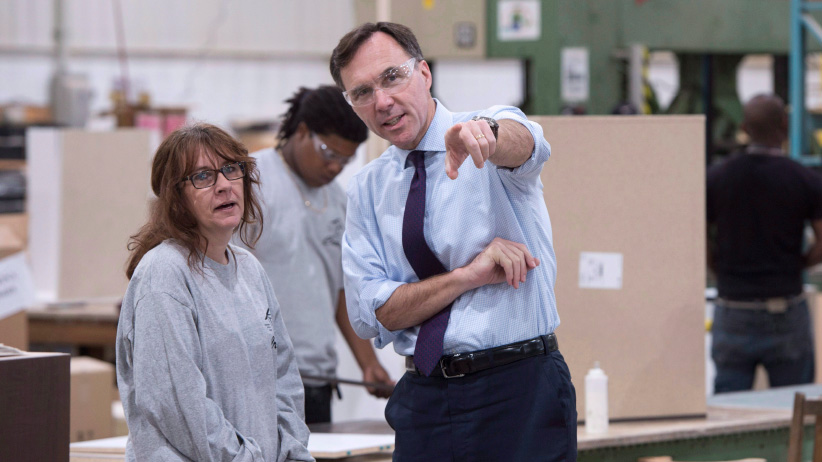 Finance Minister Bill Morneau chats with a worker at a kitchen counter factory, in Montreal on Tuesday, October 17, 2017. (Paul Chiasson/CP)

The gender wage gap was a central focus for the Trudeau Liberals’ second budget. Budget 2018 was even called “Equality + Growth” and indeed, much of the 367-page document drew connections to how boosting women’s labour participation and promoting equality will help Canada’s economic growth.

Here are the six measures the federal government introduced to shrink the 31 per cent wage gap:

The main measure outlined in Budget 2018 is new pay equity legislation aimed at federally regulated sectors. The legislation would apply to approximately 1.2 million employed Canadians. It would create a streamlined pay equity process for employers, set out timelines, compulsory check-ins and provide independent pay equity oversight. The government plans to continue consulting employers and unions in coming months so exact details of the legislation are scant.

The government plans to publicly release more detailed and clearer information on pay practices in the federal sector, with the goal of making existing wage gaps more obvious. The cost: $3 million over five years. The plan will also include a symposium on women in the workplace in the spring of 2019, carrying a $1.5 million price tag.

3. A boost for parental leave

The government is offering an extra five weeks of paid parental leave if a second spouse commits to sharing EI parental benefits. The “take-it or-leave it” benefit will be available starting June 2019. Eligible two-parent families, which would include adoptive and same-sex couples, can take the proposed leave. Parents can split the 40-week leave in several different ways, just as they could with the 35-week leave in the past. The idea behind the leave is to incentivize new fathers to take on more parental responsibility while giving women the flexibility to go back to work earlier. Quebec already provides these incentives. According to budget documents, 80 per cent of new fathers in Quebec claimed parental leave that was “specifically reserved for them.” Meanwhile, in the rest of Canada, where there is currently no mandated second parent leave, that figure is only 12 per cent.

4. Women in office, kids in parliament

The government is looking to ensure that the House of Commons is kid-friendly. That is, they hope to make more accommodations for Members, including offering child care, letting Members bring their kids on the House of Common floor and allowing Parliamentarians to take maternity as well as paternity leave. True, it only benefits the tiniest fraction of women, but it’s an effort to lead by example and encourage more women to run for office.

5. Getting women into the trades

The government wants to make jobs in the trades more desirable for women. To that end, it will spend nearly $20 million over five years, starting in fiscal 2018-19, to pilot an Apprenticeship Incentive Grant for Women. Women interested in male-dominated Red Seal trades, like welding and pipe-fitting, are eligible to get a total of $8,000 in grants. The new Apprentice Incentive Grant will mean they get $3,000 per year for their first two years of training on top of the Apprenticeship Completion Grant, which already exists and is valued at $2,000.

There will also be a new Pre-Apprenticeship Program, which will encourage women, Indigenous people and those with disabilities to explore trades careers. The program will cost $46 million over five years, then $10 million per year after that. Ottawa will also put $10 million over three years into a new Women in Construction Fund, which will expand on existing tactics that have been successful in attracting women to the trades, like coaching and mentoring.