The unexpected anguish of winning the prize every Canadian wants

How I decided whether to keep my roll-up-the-rim, new-car prize from Tim Hortons 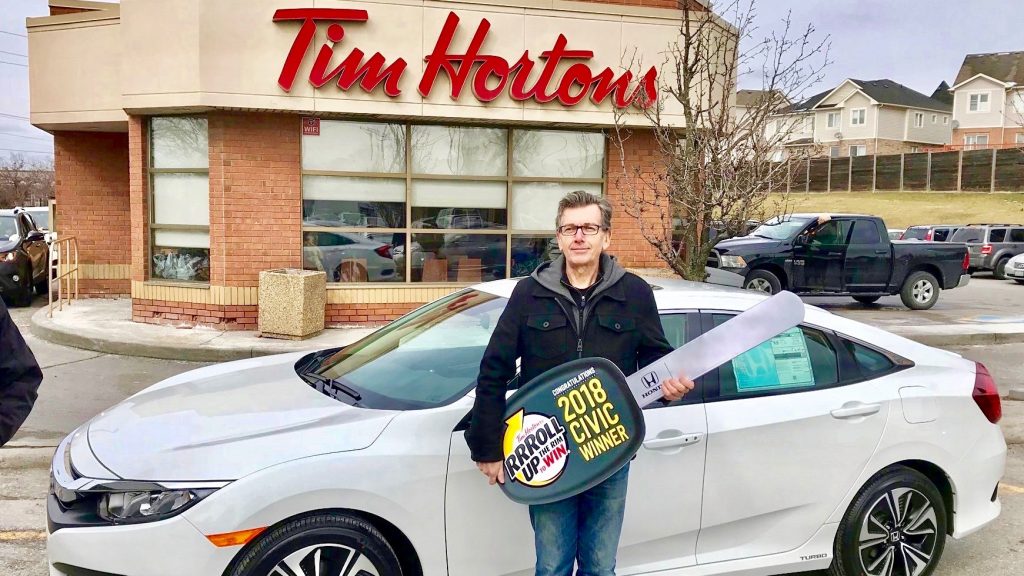 The author pictured with the model of Civic he won in front of the Tim Hortons in Scarborough where he bought the winning cup of coffee. Handout

In December 2015 we decided we needed a vehicle and bought the cheapest one suitable—a brand new 2016, red 6-speed Kia Rio hatchback ($20,000 all-in). Two years on, that car is paid off, still under warranty, with only 30,000 kilometres on the odometer. Replacing it was the last thing on our minds—until we won the prize every Canadian wants.

That is what a friend on Twitter called it: “The prize every Canadian wants.” I’m not sure about that, but finding the words “WIN/GAGNEZ – CIVIC” under the rim of a Tim Hortons’ coffee cup in February was definitely a surreal moment, cultural or otherwise.

The company circulated more than 216 million Roll Up The Rim To Win contest cups in 2018, spends millions marketing the annual event, Canadians from St. John’s to Whitehorse play, and I’d just beaten the one-in-4.4-million odds in rolling up a new car—specifically, a 2018 Honda Civic EX-T sedan with a $25,390 manufacturer’s suggested retail price, in the colour of my choosing.

My reaction was surprisingly subdued. I was skeptical. I wasn’t sure if winning was really that easy, or what other hoops I’d have to jump through to claim my prize. Almost immediately I thought, “I already have a car. I’m self-employed and, in January, I just lost my best-paying client. Can I take the cash instead?”

The contest rules on Tim Hortons’ website answered both questions. To claim the prize, I needed to mail in the winning tab, answer a simple skill-testing question, agree to have my photo taken and name published, and await confirmation. As for claiming the cash equivalent instead of the car? Not an option. I’d have to take it, and then decide whether to keep it or sell it. So began several weeks of waiting, financial deliberations, mood swings and, seriously, personal anguish to accompany my pending good fortune.

Had this been 2015, keeping the car would be a no-brainer. That year, my wife and I went from having two old vehicles to none, after losing one in a crash and driving the other one into the ground. We tried car sharing, but as winter set in, we decided to buy the Rio.

It took about 10 days from sending Tim Hortons my winning entry before a marketing rep called to confirm my win. A few hours later, Honda Canada followed suit. Next steps: a promotional photo op at the Tims where I’d bought the lucky coffee, then connecting with my local Honda dealer to order my actual car. The prize includes tax and delivery, making the value about $30,000.

I decided I didn’t want it.

I was sure I’d sell the car—ideally back to the dealer, as I had little appetite for the hassles of listing and selling it privately. I realized that even if I sold it without driving it, it would be considered “used” and priced accordingly. I hoped I could get $22,000 but decided I’d be happy with at least $20,000. Just for fun, I also looked up the blue book value of my 2016 Rio: plus/minus $8,000.

Once my win was official, I started to share the news. But the more good wishes I received, the more the idea of keeping the car held sway. The photo op—posing in front of a model of the winning car with the Tims’ franchise owner, holding a big ceremonial key—turned my head some more, as did the fact that EX-T has some nice features not in my Rio, such as lane departure warning, collision mitigation braking, rear camera, heated seats and a power sun roof.

By the time I visited my local dealer and saw a few models in the showroom, I’d come around to thinking that what I actually wanted—and what we needed—was to upgrade my prize to the more practical (for us) 4-door sport hatchback model, in the same hot, deep red as our Rio, and take the car.

But math, and common sense, would eventually win out. The insurance quote was a wash—just under $2,000 for the Honda, within $100 of my current rate. Gas would be a bit more; the Honda’s turbocharger requires premium fuel, but we don’t drive a ton, so not a deal breaker either.

But on the car itself, upgrading to a hatchback would add $2,300 plus tax to my costs. Then I’d also have to spend at least another $1,000 for the snow tires and extra rims and winter floor mats that I’ve already sunk into the Kia. Weighing that against the $8,000 or so that I’d get for selling the Kia, and my choices were like this:

If the red hatchback had been ready the day I was so set on it, I might be driving it today. But it took Honda another week to sort things out between head office and the dealer. And by that time, it was clear the prize we wanted—and needed—was the $20,000. So I took the sedan, sold it back to the dealer and walked home with a five-figure cheque in my pocket.

Not the prize every Canadian wants, perhaps, but a pretty fair return on a one-in-4.4-million cup of coffee, nonetheless.