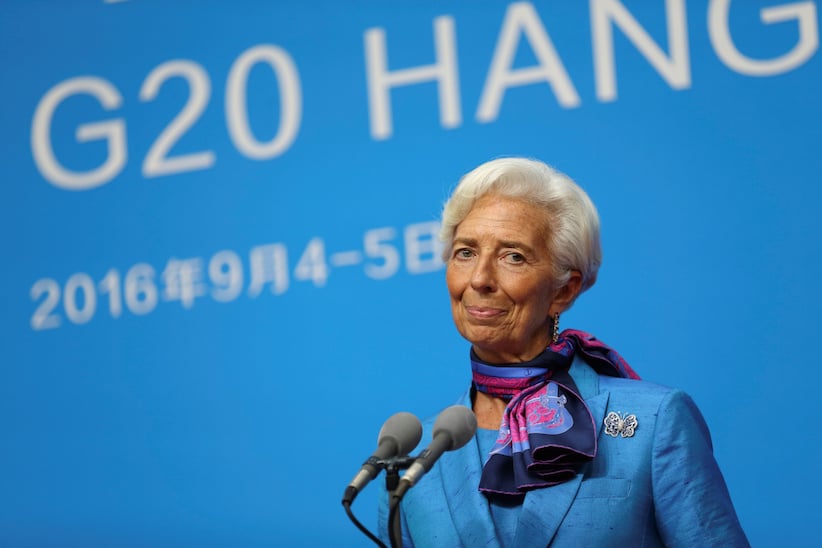 Our annual Newsmakers issue highlights the year’s highlights, lowlights, major moments and most important people. Read our Newsmakers 2016 stories here, and read on to see why Christine Lagarde made the list as one of our seven Newsmakers of the Year.

With the distraction of Brexit and Donald Trump, you might have missed that a country of more than 93 million people nearly went bankrupt this year. The International Monetary Fund stopped that from happening, announcing on Nov. 11 that it would lend Egypt the equivalent of about $16 billion. Brexiteers and Trump’s army of angry old white men might disagree, but the rescue of Egypt was evidence that globalization works. The IMF was created at the end of the Second World War to help make the planet a less chaotic place. The fund in 2016 prevented a dangerous region from becoming even more so.

But there is something else about that loan. Egyptian President Abdel Fattah al-Sisi agreed to all sorts of conditions. His government cut fuel subsidies and pledged to raise taxes, for example. Textbook. The IMF isn’t a charity; like any lender, it expects its clients to get their houses in order. But Egypt also said it would increase the number of spaces at public nurseries and make public transportation safer to “support women’s labour force participation.” That’s new. In September, Christine Lagarde, the IMF’s managing director, told Maclean’s that if Egypt wanted the fund’s money, it must do more to help women take jobs or start companies. A couple of months later, she proved that she had meant it.

After years of following rules written by men, Lagarde is forcing the world’s finance ministers —who are still overwhelmingly male—to rethink their approach to economic policy. Her push to include more women in economic life is based on research: economies with narrow gaps between the labour participation rates of men and women are demonstrably stronger. Lagarde also has freed the IMF from the doctrine of austerity. She is the undisputed champion of using deficits to help the global economy break out of what she calls the “new mediocre.” Again, her position is backed by IMF research. Lagarde takes no credit for the math behind her position. But it is fair to say her advocacy made it easier for countries such as Canada and South Korea to sell a policy out of fashion since the 1980s.

Newsmakers 2016: The best and worst in business and the economy in 2016

Lagarde, who turns 61 on Jan. 1, has been a star of the international business press—and to a lesser extent, fashion magazines—for years. As France’s finance minister, Lagarde was on the front lines of the fight against the economic catastrophe that followed the collapse of Lehman Brothers in 2008 and then the European debt crisis that came soon after. She was rushed into service at the IMF in 2011 after the abrupt resignation of her disgraced predecessor, Dominique Strauss-Kahn. Lagarde was well-liked. And the fact that she is the first woman was a nice story. But her ascent still rankled. There had been talk that Strauss-Kahn’s successor should be a non-European, which also would have been a first. (Canada supported a Mexican for the job.) And there was grumbling about her qualifications because Lagarde is a lawyer, not an economist.

Related: Christine Lagarde faces the fight of her life

The critics mostly have gone silent. In February, Lagarde was reappointed without opposition. That left her emboldened. In the 1980s and 1990s, the IMF’s answer to everything was spending cuts, freer trade and flexible exchange rates. Lagarde’s IMF takes a wider view. It worries about climate change and income inequality. It argues that every country with a solid credit rating should take advantage of its position and borrow at low rates to invest in infrastructure. Lagarde has been making that case for a few years. At first, she was ignored. Now, deficit spending is the global consensus, with Germany the last significant holdout. Not bad for a lawyer.

Next year will test Lagarde’s talents. She leads a global institution founded by democracies that now are rejecting globalization. When Lagarde visited Canada in the fall, she promised to confront these forces. That was before Trump won. Lagarde might be in over her head. Then again, five years ago, the IMF had nothing to say about gender equality. It now has a lot to say. Just ask Egypt.