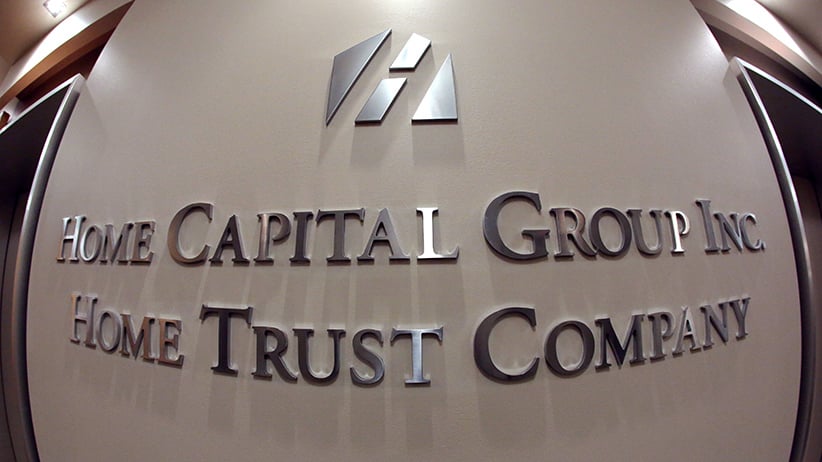 The entry to the Home Capital Group’s headquarters is seen at an office tower in the financial district of Toronto, Ontario, Canada May 1, 2017. Picture taken using a wide angle lens. (Chris Helgren/Reuters)

It’s been a bad month for Home Capital Group. The share price of the alternative mortgage lender plunged last week after it was forced to secure a costly line of credit to make up for significant withdrawals from its high-interest savings accounts.

Some observers have speculated that Home Capital’s funding troubles could spread to other lenders in a repeat of the domino effect triggered in the U.S. by the collapse of Lehman Brothers. Not so, say other market watchers. Here’s a round up of perspectives on the contagion question.

“Time and again financial earthquakes are thrown up by excessive risk taking on borrowed money in property. Indeed, property seems to have a unique capacity for inducing collective memory loss among bankers. Today, the banking systems of Canada and Australia look relatively well capitalised. They have been scrutinised and stress tested a great deal since 2008. So if a systemic crisis is brewing, it may be in the shadow banking system.”

Issues may be spreading

–Stephen Boland, analyst at GMP Securities, on May 2

The first step towards a correction

“We see the recent stress of Home Capital Group as a first step towards a long-overdue market correction. The main problem with the sector, as we view it, is residential real estate valuation… We believe the ONLY reason why home prices have moved demonstrably higher in Canada than they are in the United States has to do with this government backstop which has been provided largely through insurance and guarantees of the Canadian Mortgage and Housing Corporation (CMHC), but also to a degree through the Canadian Deposit Insurance Corporation (CDIC).”

–Geoff Castle, portfolio manager of the Pender Corporate Bond Fund, on May 1

“It’s a pretty hot fire in one little corner of the forest, and it doesn’t look like it’s spreading. There are firefighters standing around it right now, so if it starts to move, they’ll put it out.”

“The domestic housing industry has been driven to a significant extent by alternative lenders, and a chill in this sector makes a correction more likely by the day. But the U.S. financial crisis was cause by dominant institutions trying to play hot potato with mortgage default liability, when in Canada, it’s clear who would take the hit. A correction would hurt, a lot, but it won’t be 2007.”

–Scott Barlow, Globe and Mail columnist, on May 2

Not the ultimate test

No signs of contagion

“HCG isn’t too big to fail and could be absorbed fairly easily by one or more private lenders… Furthermore, there are no obvious signs of contagion, with the HCG panic spreading to other non-bank lenders… HCG’s plight might still prove to be pivotal because it highlights how looser credit standards have fuelled the massive run-up in house prices, particularly in Toronto.”

–David Madani, senior Canada economist at Capital Economics, on May 2

“Home Capital is not Lehman and there is no mortgage-lending crisis in Canada (at least not yet). Nor is there even any real scandal at the company which — until April 20 — had $28-billion or so in assets and a solid profit outlook. So who’s really killing Home Capital? The answer, Dr. Watson, is to be found in knowing who alone was standing on the edge of the cliff when the company began its unexpected plunge in value: The Ontario Securities Commission… The scandal, however, is not with [founder Gerald] Soloway or Home Capital. It’s with the OSC staff and their unprecedented and damaging allegations that are at best contentious and are irrelevant to Home’s corporate condition.”

So far the op-ed I’ve seen blaming the OSC for HCG’s woes wins the Canadian creative writing award for the day.