The Move: Why one family left Toronto for Vancouver Island...and 14 goats

The Bergot-Brownings were itching to leave Toronto. One year and 14 goats later, they’re among greener pastures on Vancouver Island. 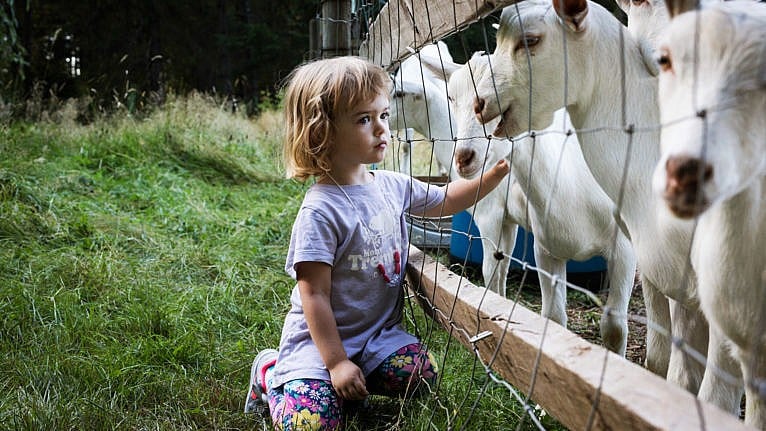 The Bergot-Brownings’ neighbours lent the family a herd of 14 goats. Nora, the couple's daughter, once invited seven of them inside for tea. (Photography by Melissa Renwick)

In 2014, the Bergot-Brownings dropped $714,000 on a three-bedroom semi-detached home in Toronto’s Danforth neighbourhood. After Nora’s birth in 2019, the family took regular trips to visit Nicole’s parents, who lived near Qualicum Beach on the east side of Vancouver Island. Matt, a native of Grimsby, England, loved the mountains, and Nicole says the island felt even more like home than north Vancouver, where she grew up. “Every time we visited, we were like, ‘What’s our five-year plan to move out here?’ ” Nicole says.

At the time, moving didn’t make sense. Nicole worked in television production—a city-bound pursuit—and the family was well-settled in Toronto. Finley attended school a block from their house, and Nora’s daycare was also close by. They were regulars at an east-end farmer’s market, and Matt and Nicole enjoyed regular date nights closer to home at Left Field Brewery. Still, they found themselves more and more eager to spend weekends camping in Algonquin Park and visiting friends’ cottages on Georgian Bay. “We were trying to get out of the city as much as possible, which was telling,” Nicole says.

In February of 2021, a friend sold their own semi for more than $1.5 million. “We were shocked at what they got for it,” Nicole says. “I reached out to a realtor friend and said, ‘Hey, what do you think our house is worth?’ ” The realtor appraised the Bergot-Brownings’ home at $1.2 million, far exceeding the couple’s million-dollar estimate. Between the attractive selling price and opportunities for remote work at an all-time high, Nicole and Matt felt compelled to make the cross-country leap to Vancouver Island. They listed their home for $1.25 million that March. It sold for $1.28 million just four days later. 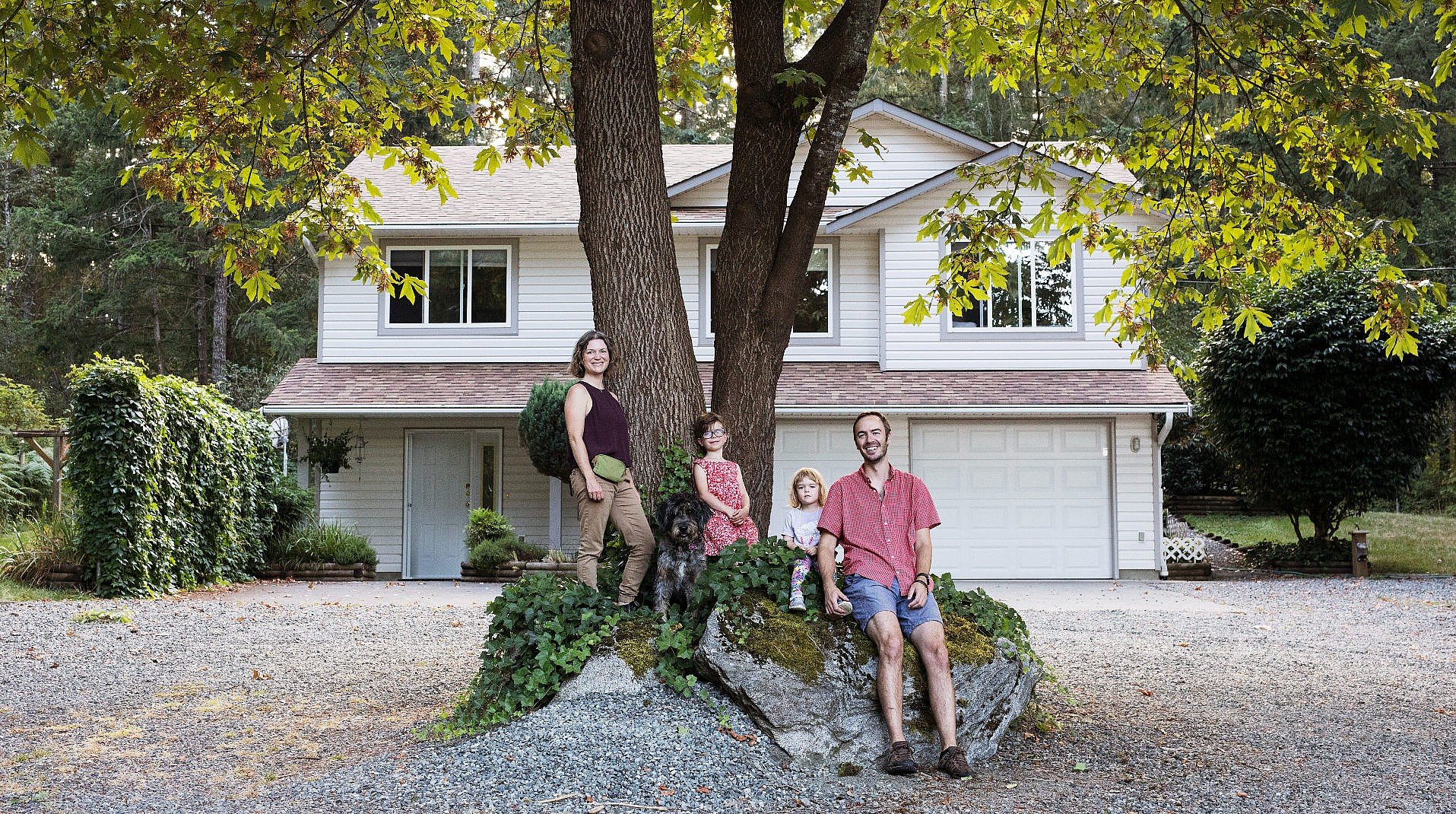 The Bergot-Brownings in front of their new home on Vancouver Island. (Photography by Melissa Renwick)

Nicole and Matt immediately went in search of a rural property on at least five acres of land. (“We were sensible enough not to go for a 100-acre ranch,” says Matt.) At first, Nicole’s parents viewed properties on the couple’s behalf. Inventory, however, was sparse. With their July closing date fast approaching, the couple shipped their Toronto belongings to Nanaimo, drove for 10 days in their 2008 Honda Civic—camping along the way—and moved in with Nicole’s mom and dad.

Many of the properties they viewed out west were either in poor condition (all pasture, no trees) or in bad locations (next to industrial zones). But come October, Nicole and Matt lucked out: they found a four-bedroom, three-bathroom farm in pastoral Merville, a township 15 minutes north of Courtenay with a population of 1,200.

The extremely private property sat on five acres of meticulously maintained woodland. The main entrance opened onto a rec room with a wood-burning stove and a nearby guest bedroom. The upper level had a roomy kitchen, complete with an island. The floor above offered a primary bedroom with a full ensuite, and two bedrooms—one for each of the girls. There was a storage shed and a stable, which Nicole imagined populating with animals one day. “My childhood dream was to be a goat farmer,” she says. 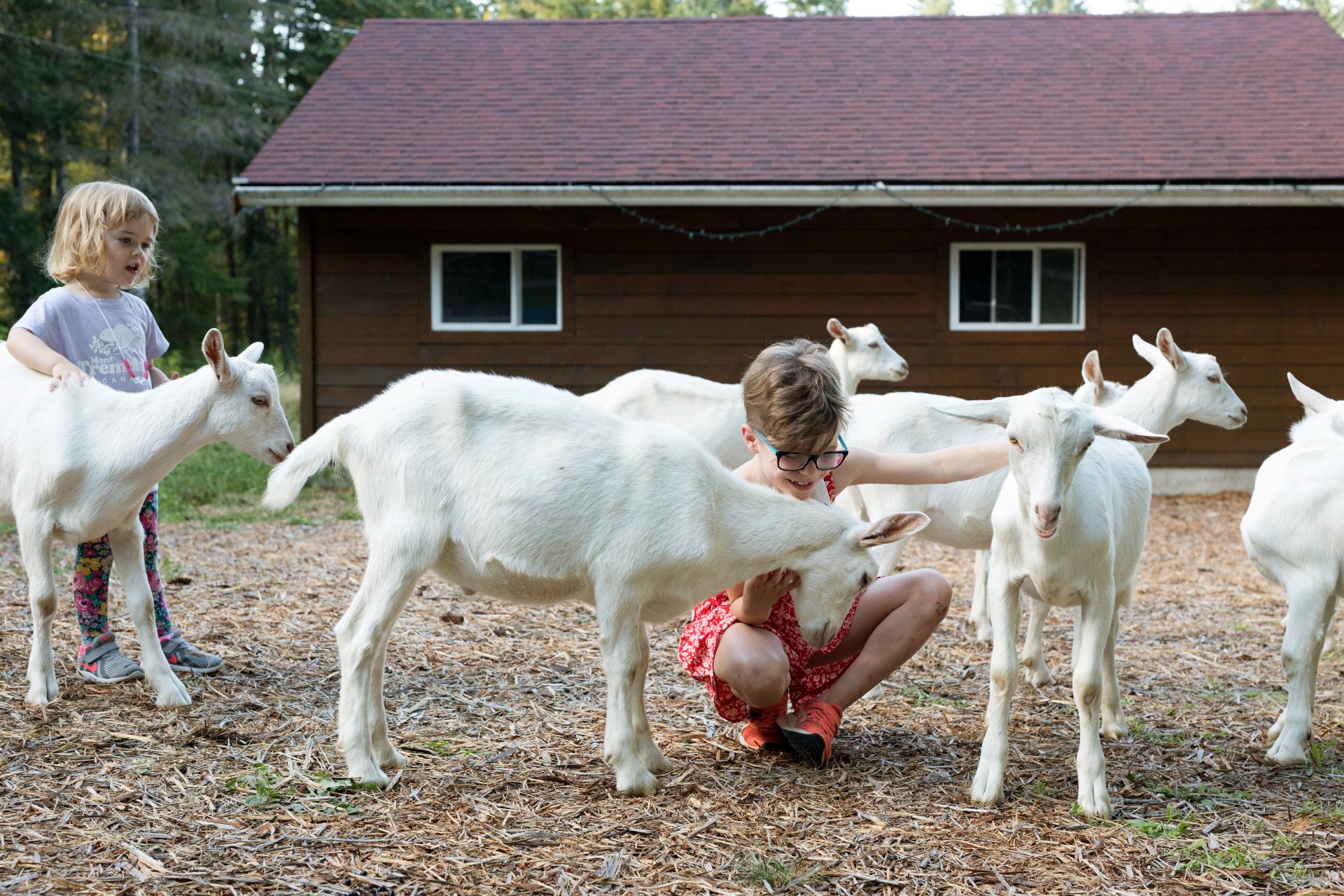 One animal in particular ended up swaying the sale. The previous owners planned to include their elderly cat, Ollie, with the property, but Nicole was allergic. Even so, she tacked a solemn promise onto their $1,185,000 offer. “I wrote a letter saying we’d take the cat, and that I’d take medication if necessary,” Nicole says. “So we laughed about buying a very expensive cat.”

The family spent much of their first winter in Merville, building snow forts around the farm. A neighbour loaned them a herd of 14 goats to keep the acreage’s undergrowth in check. If they find themselves missing urban conveniences, the Bergot-Brownings just look up. “I love the quiet and the stars,” Matt says. “This is a change of pace from an entire life lived in cities.”

This article appears in print in the November 2022 issue of Maclean’s magazine. Subscribe to the monthly print magazine here, or buy the issue online here.

FILED UNDER: The Move Toronto vancouver