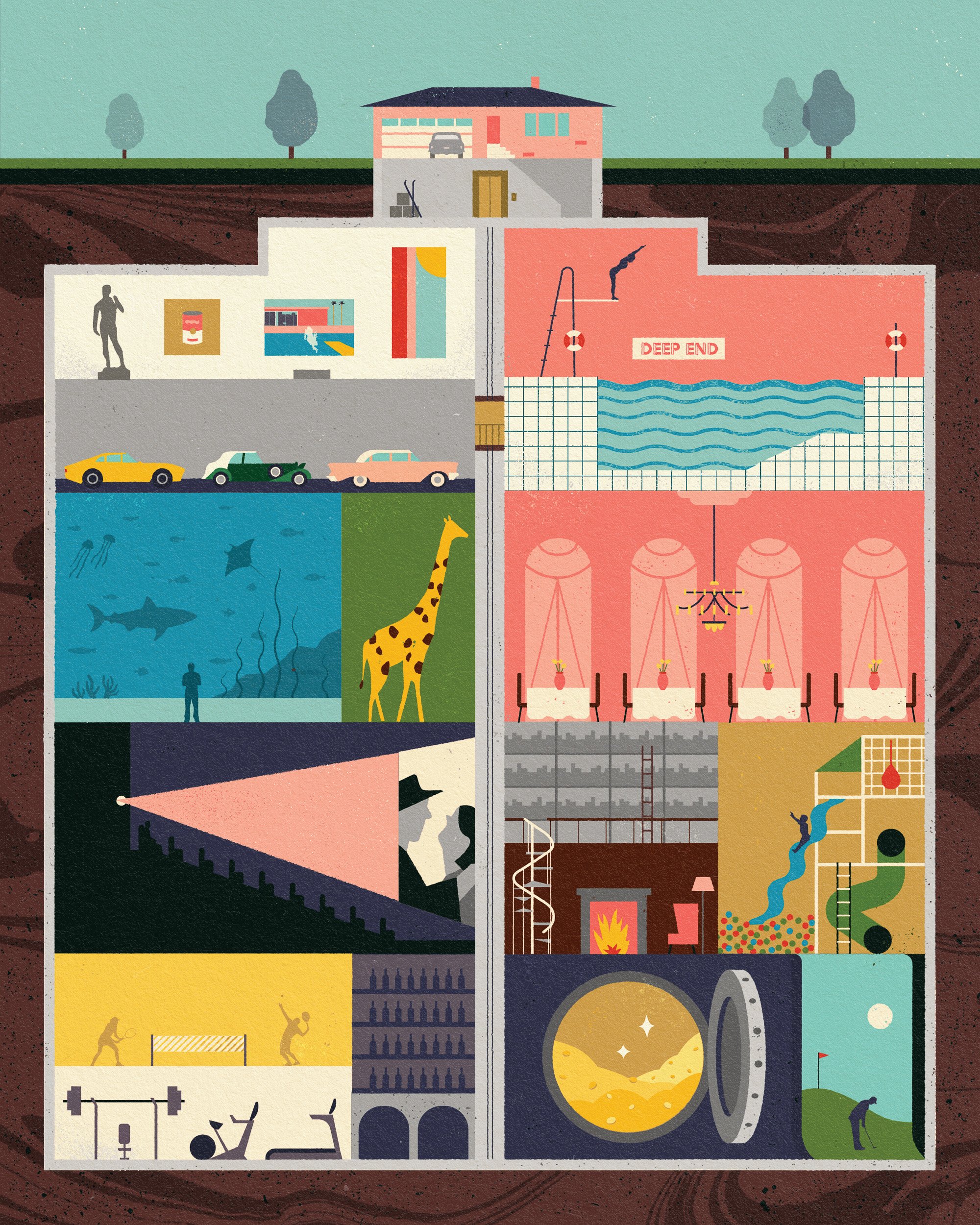 In Hoggs Hollow, an upscale Toronto neighbourhood, people love their trees. In November, many lawns bore a sign reading, “Stop the Chop,” a campaign to save a 250-year-old sugar maple. The signs remain, but the plea failed. The massive tree had stood behind a house that a family bought with plans to demolish it and build a new home. The buyers ignored a city forestry report and cut down the maple to accommodate a two-level basement whose area is nearly twice the above-ground footprint of their planned new house. Drawings show the basement will feature a karaoke lounge, a card table, a billiard room, a golf simulator, a stage, a basketball court, a spa featuring a steam room and sauna, an exercise room, a five-car garage, a kids’ lounge, a mud room, two bathrooms and a nannys’ lounge, plus “Nanny Room #1” and “Nanny Room #2.”

Below-grade mansions are not new. In the mid-2000s, very wealthy residents of the London boroughs of Chelsea, Mayfair, Knightsbridge and Westminster pioneered deep basements to make houses much bigger than rules permitted. Locals dubbed them “iceberg houses,” but after hundreds of approvals, London councils restricted the size of these subterranean pleasure dens. So far, big Canadian cities have no rules governing iceberg houses, and several of these huge caves already exist under homes in Vancouver and Toronto. Unless building departments draw up some rules, they may come soon to a street near you.

Locals in Hoggs Hollow fear for the future of the tree canopy, which makes the area resemble a forest with some houses in it. “We worked our asses off to move here, because it’s so green,” said Shannon Rancourt, sitting in her living room four doors from the proposed home. “Now it’s all being toppled.” Rancourt and a neighbour, Laura Lamarche, spearheaded the lawn-sign campaign; another sign reads, “Save our tree canopy! Stop Iceberg Houses.” They fear tree removals and huge basements could cause flooding in this valley.

The iceberg house trend has reached Vancouver, says Matthew Soules, an architect and professor at the University of British Columbia. A 1950s home near UBC avoided the wrecking ball a few years ago because new owners were keen to preserve its mid-century-modern design. Instead, they dug a basement beside the house that is many times larger than the dwelling itself. Soules is aware of another iceberg house in West Vancouver’s Dundarave area. East of Vancouver, the Abbotsford News reported on a 10,000-sq.-ft. home whose vast underground garage stores vintage luxury cars and military vehicles.

These basements serve very particular purposes, Soules writes in his new book, Icebergs, Zombies and the Ultra Thin. Above ground, these houses offer what most do: places to cook, eat and sleep, while the underground portions become “personal Disneylands . . . an extended territory of leisure, entertainment and luxury-goods storage and display.”

Paul Miklas, a builder who specializes in very large houses, is excited about the opportunities of iceberg homes. He built one oversized basement on a 35,000-sq.-ft. mansion in Toronto’s exclusive Bridle Path area. Due to city zoning rules, a golf simulator included in his initial design would have, as he puts it, “crashed right into the view” from the pool. The solution: put the golf simulator underground. He added a below-ground wine cellar, theatre and gym.

With forethought, Miklas says, builders can save big trees and still dig huge basements: “If you are willing to put the money into a subterranean structure, figure out a way to accommodate the life of the tree.” With iceberg homes, he notes, “you don’t need a two-acre lot. Now you can blow the thing up to 12,000 sq. ft. underground. You can create these beautiful, massive homes, and it’s easier on the upkeep because there is less exposure to the elements.” In the spring he will break ground on another iceberg, with a theatre and a large swimming pool, both underground.

Soules says fear of iceberg houses extends beyond worries about trees. “These wealthy people are going to live underground and challenge our concepts of domesticity. It triggers our worries and anxieties and discomforts with growing wealth inequality in our cultures.”

Current zoning in Toronto allows home builders to dig as wide and deep as they want. But so far, the city hasn’t seen the sort of problems that have emerged in London, where excavations for iceberg homes have caused the foundations of neighbouring buildings to shift. In any case, says Kyle Knoeck, Toronto’s acting director of zoning, “This has never been a form of proposal that we have seen very often.”

Still, city council recently instructed planners to report back on ways to control the trend. Right now, says Councillor Jaye Robinson, “Things are done in a willy-nilly way. They approve now and ask questions later. If you lived beside one of these things, you wouldn’t be very happy if your foundations started cracking.”

Soules asks a more fundamental question about the trend to subterranean home theatres and golf simulators. “Before, you would go to the actual theatre and maybe fall in love with someone you met in the lobby,” he says. “Underground golf simulators? What happened to going to play golf on a golf course, and interacting with actual human beings?”

CLARIFICATION, Feb. 24, 2022: An earlier version of this article made reference to the owner of a particular property. The plans submitted by that homeowner to the Toronto committee of adjustment were ultimately abandoned by the owner when he applied for his building permit. The basement plans approved by the city on Aug. 24, 2021 call for a one-level basement.

This article appears in print in the February 2022 issue of Maclean’s magazine with the headline, “What lies beneath.” Subscribe to the monthly print magazine here.