The biggest piece of land for sale in Canada right now 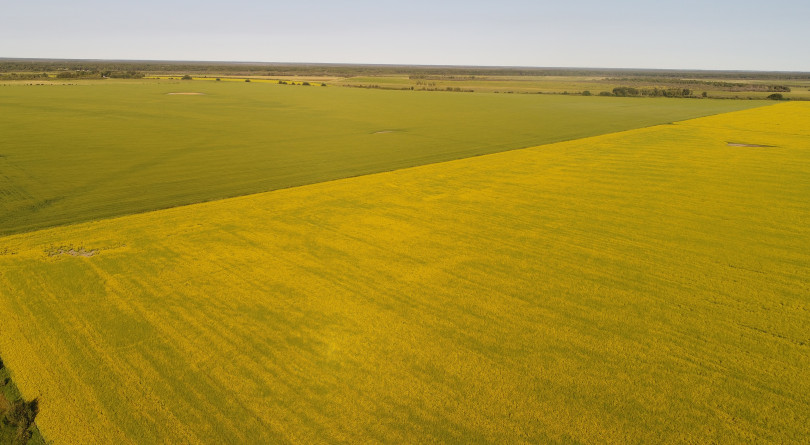 Three adjacent farms near The Pas, Man., are for sale (Darren Sander)

Late one night in 1954, Anthony Markus hid near Hungary’s border with Austria, waiting for two friends who planned to join him in trying to escape the Communist regime. His friends never showed, so the 18-year-old Markus set out on his own to slip through the Iron Curtain. Crossing mineﬁelds and barbed wire fences, he then ran through the night until he found an Austrian vineyard, where the farmer took him in and offered him work.

It’s anything but a straight line from that escape to the small Manitoba community of The Pas, but today Markus and his son Tony operate one of the largest farms in the province’s north. Nestled between rivers in an area known as the Carrot Valley, the family’s Big Lake Angus Farm boasts 14,600 acres of land and 1,000 head of cattle.

And, along with two adjacent farms, it can all be yours—assuming you have access to $53.3 million.

The three farms, which total nearly 24,000 acres in size, are for sale in what is believed to be the largest chunk of Canadian dirt on the market right now. The scale can be difﬁcult to comprehend, but the land area up for grabs is just slightly smaller than the entire City of Vancouver, or for those in Toronto, roughly equal to the area between Keele Street and the Don Valley Parkway, all the way from Highway 401 to Lake Ontario.

“It’s flat like a pancake; you can farm corner to corner,” says Tony proudly. “We don’t have rats, we don’t have gophers, we don’t have molehills.” He farms cattle and grain, while the two neighbouring farms are strictly grain, including wheat, canola and oats.

While Canada’s obsession with residential real estate is legendary, the vast stretches of ﬁelds and pastures that make up the farming sector get far less attention. Yet, according to Statistics Canada, the average age of Canadian farmers in 2016 was 55. And some estimates say that half of all North American farmland could change hands in the next 15 years, as farmers retire. It’s a staggering wealth transfer—StatsCan estimates the value of farmland and agricultural buildings in Canada was $428 billion in 2016.

As a Saskatoon-based realtor who specializes in large farm sales, Darren Sander is seeing the transfer up close. “One of the things about selling farms that is probably different than other real estate is that, when a farmer hires us to come to the door, they’re hiring you to sell their life’s work,” says Sander. “With a farmer, farming isn’t just what they do. It’s who they are.”

In the case of the Big Lake Angus Farm, it was Sander’s idea to group several farms together to sell as a package, “to make it of such a size that we could draw someone from a long distance to buy this property.” So he approached Markus’s farming neighbours to see if any wanted to sell their land at the same time. With many farmers in the area also looking ahead to retirement, two agreed to add their farms to the mix. The sale isn’t conditional on the purchase of all three farms together, but the potential buyers who have reached out so far, from as far away as B.C., Ontario and Alabama, seem interested in the lot.

As the listing for the property notes, the asking price “includes all buildings, homes, bins and all infrastructure. The equipment and cattle is also included.”

READ: What Canadians don’t understand about farming—and what they need to

While farmland might not get the same attention as red-hot housing markets in Toronto or Vancouver, the price trajectory has followed a similar path. Statistics from Farm Credit Canada, a Crown corporation that lends money to farmers looking to expand their operations, show that the average annual price gain for farmland was eight per cent since 2000; in some years, such as 2012 and 2013, values soared by as much as 20 to 25 per cent each year. Since then price gains have slowed considerably. In 2018, the increase in farmland values slowed back to six per cent.

The big driver of escalating land prices since 2005 has been rising farm incomes, says J.P. Gervais, chief agricultural economist with Farm Credit Canada. “That can be explained by one thing—demand for food,” he said, pointing to changing diets in India and China and rising global incomes. Canadian agricultural exports have boomed and, even though producers have felt the sting of trade tensions over the past few years, Gervais said the outlook remains strong. “We’ve seen a slowdown in the world economy; but, in terms of food demand, the fundamentals remain very positive.”

It’s also true that in the years immediately after the ﬁnancial crisis of 2008-09, farmland came into its own as an asset class. At the time, many institutional investors were looking for safe havens away from the volatility of the stock market. Farmland offered that in spades. “Everyone has to eat” was a common refrain among analysts.

Some of the largest investment funds in the world flocked to farmland. In 2013 the Canada Pension Plan Investment Board, which handles the retirement money for 20 million Canadians, leapt into the sector. That year it paid $120 million for 115,000 acres of farm property in Saskatchewan, with a goal of investing another $500 million in Canadian farmland over the next ﬁve years.

While humanity’s need for food hasn’t waned, investor enthusiasm for farmland has cooled somewhat. In 2017 the CPPIB exited the sector, partly a result of resistance from farm groups—two years earlier, Saskatchewan banned pension funds from buying farmland. But it’s also gotten harder to generate money by renting out land to farmers, says Sander.

However, the biggest buyers of farmland today remain other farmers. From 2011 to 2016, the number of farms in Canada fell six per cent to 193,500, while consolidation resulted in the average farm size climbing from 779 acres to 820 acres.

That puts the mammoth 24,000-acre sale in The Pas in perspective. Sander’s pitch to potential buyers is value for money. While prices around The Pas have risen, they remain well below other parts of the country like B.C., Ontario and Quebec, where land prices can be three to ﬁve times higher. “It’s the most economically priced, cultivated land that I am aware of in Canada,” he says. “And it’s great land, great soil.”

One drawback for some might be the area’s remote location, which is a two-hour drive, at least, to the closest other farming community in Swan River, Man. But the location was a big draw for Tony’s father. 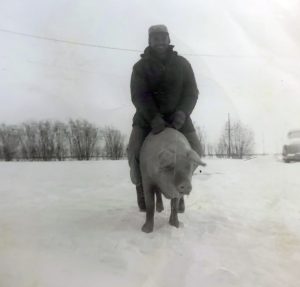 After Anthony Markus fled Hungary in 1954, he eventually made his way to Canada, landing a job working in the bush south of The Pas, before settling in Regina and working as a baker. While there, he brought over a young woman he’d met in Austria who became his wife, Margaretta. When the bakery laid him off, he decided he wanted to farm instead—his father had owned a farm until the Communists seized it—so the couple took $10,000 they’d saved up and headed back to Manitoba. In 1962 he bought the ﬁrst 400 acres of what would become the sprawling operation the family has today.

Markus, 83, and Margaretta, 80, still live and work on the farm, as does Tony’s 18-year-old son; though, as Tony says, “farming’s not really his thing.” His daughter, 23, also had no interest in being a farmer.

In recent years the younger Markus found himself wondering about the future of the farm if neither of his children wanted to take it on. “I’m doing all this work, but for what? Am I just going to work till I drop and no one takes over?” he asked himself. “It’s great to build something big, but once you’ve built it, you still have to maintain it.”

As for what he plans to do with himself after selling the farm, he’s looking forward to the break. Markus owns a plane and plans to fly more. He also builds and rides motorcycles, and would like to visit his sister in France, where she owns a vineyard.

There’s also a good chance you’ll ﬁnd him working on his neighbours’ farms. “I might be selling my farm, but I really enjoy running farm equipment,” he says. “I just don’t want to be doing it 24/7.”

This article appears in print in the December 2019 issue of Maclean’s magazine with the headline, “A really big deal.” Subscribe to the monthly print magazine here.