Trump vs. his party: Spat spills into NAFTA 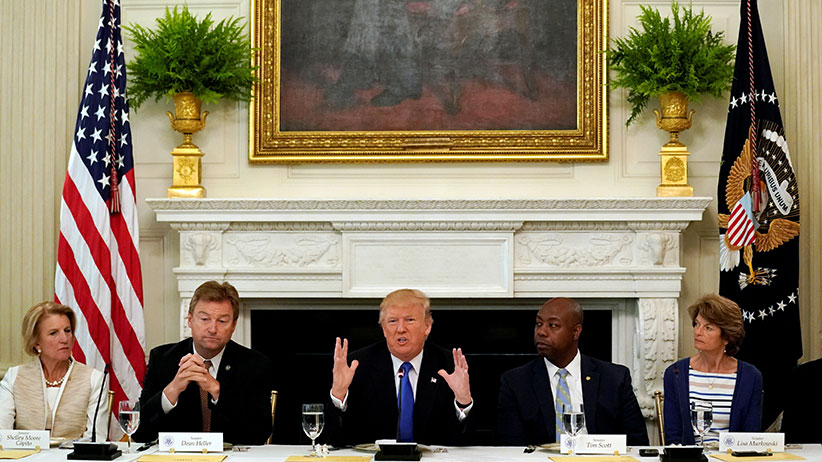 WASHINGTON – The bad blood between President Donald Trump and his party’s congressional wing is now palpable. He takes daily digs at Washington Republicans, and they’re increasingly willing to chide him publicly.

That septic plasma is now seeping into an area of interest to Canada.

The latest point of public discord directly touches NAFTA. The party’s top senator has just made it clear he not only disagrees with the president’s attitude on trade, but doesn’t want anything that will disrupt the agriculture industry, which is Washington-speak for preserving NAFTA.

Mitch McConnell addressed this issue right after the president threatened that he would “probably” cancel the agreement between the U.S., Canada and Mexico, just days after negotiations had begun.

Perhaps mindful of inflaming an already volatile relationship, McConnell couched it in diplomatic language, not mentioning the president by name. The New York Times reported this week that Trump and the Senate leader got into a shouting match.

“I’m a little concerned about some of the trade rhetoric,” McConnell told a public event in his home state of Kentucky.

“(The rhetoric is) not only by the president who succeeded, but by the people who were running against him. And I think we still have a selling job to point out to most Americans that trade is a winner for America. We’ve been a great trading nation going back to the founding of this country.”

He even challenged the White House’s central talking point on NAFTA. Team Trump regularly rails against the U.S. trade deficit, insisting that the key objective for NAFTA 2.0 is narrowing that gap.

McConnell rebutted that: “You may not know this but of all the current free trade agreements that we have with various countries around the world, if you add them all up, we actually have a trade surplus. In other words, they’re buying more of our stuff than we are of theirs. So … (it’s) largely untrue.”

One, U.S. lawmakers are advising their country’s NAFTA negotiators. Second, they could vote to pass or block on any deal. Finally, if the president tried to cancel NAFTA, lawmakers could fight back, by insisting their 1993 NAFTA implementation law remains in effect.

There are other trouble spots between the president and his party:

—They’re inching toward a fight over his Mexican border wall. This week the president said he’s willing to shut down the government if he doesn’t get money for a wall.

—Several spoke out against Trump’s handling of the Charlottesville incident.

—Some are making clear they intend to protect various Russia investigations. One Republican reportedly received a phone call from the president, after he proposed a bill to re-appoint the special investigator should Trump fire him.

Every indication so far is that the party base supports Trump and would turn against his critics. Lawmakers perceived as having defied the president have seen poll numbers plummet.

Surveys now show Flake with a cadaverous 18 per cent approval rating and losing a primary to a pro-Trump challenger by 14 points. The president’s allies are plotting his ouster in a primary next year.

McConnell is raising money for Flake. But partisans’ passions lie elsewhere. It’s evident in the polls, and in the talk-radio chatter. Republicans who criticized Trump over Charlottesville received a relentless scorching this week on radio.

And when the chairwoman of the Republican party appeared on one conservative radio show this month, the lion’s share of the interview revolved around the host questioning how to oust Trump-resistant Republicans.

“[Our listeners are] so frustrated by Republicans who aren’t supporting the president’s agenda,” said host Laura Ingraham, who regularly clobbers party leaders like McConnell. “Or Republicans who feel like it’s their sole mission to get a favourable editorial by The New York Times.”

She zeroed in on a few lawmakers—especially Flake. If he survives next year’s primary, Ingraham predicted he might lose the midterm election because grassroots members simply won’t show up to vote.

“There is massive discontent,” Ingraham said.

“There are so many people who will not pull the lever for Jeff Flake. They’re just not going to do it … They’re not going to hold their nose and vote for Jeff Flake again. … He never endorsed the president. Never helped President Trump.”

The party chair concurred that the base is with the boss.

Ronna McDaniel said she hears it everywhere she goes: “[The attitude] is overwhelmingly: ‘Congress needs to support this president.’ ”