What Mexico really wants from a free trade deal: respect

With a new powerhouse ambassador to the WTO and efforts to diversify trading partners, Mexico is preparing for life after NAFTA 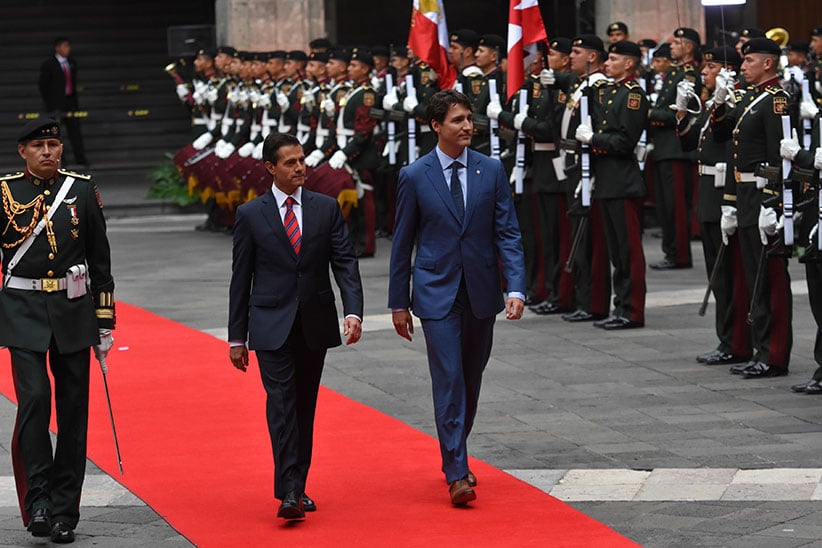 President Enrique Peña Nieto lives just seven kilometres from the national palace, but to avoid traffic, he arrived by helicopter. The chopper rumbled as he flew in to meet Prime Minister Justin Trudeau, just next to a courtyard with the largest Mexican flag that its flagpole could reasonably support.

For Mexico, the current trade negotiations are not just about economics but more fundamentally about gaining global respect. Donald Trump slanders the country at his leisure and Canada could do a devilish deal with Americans to undermine the agreement that was intended to be Mexico’s in the first place. But instead of pleading with Canada in desperation, Mexican sources say they’ve prepared for life after NAFTA, with a new powerhouse ambassador to the World Trade Organization and efforts to diversify trading partners. Above Parliament Hill and Capitol Hill, sitting at the highest altitude of any world capital, Mexico City feels it has upper ground.

“There have been voices in Canada that 95 per cent of the problem is Mexico, and that’s not true,” says Andrés Rozental, who was deputy minister of foreign relations during the original negotiations. “What Canadians don’t understand is that economy is less important than the geopolitical agreement.”

Canada was the original problem-child in NAFTA dealings. It long held a “respectful indifference” toward Mexico, as a former Mexican ambassador once said, and when Canada changed its mind—mostly for security reasons—Mexico was miffed. Canada would only delay the process and could’ve pushed it past an American federal election, at which point the deal could’ve lost its champion of George Bush Sr.

If NAFTA were scrapped now, Mexico would continue trading with Canada and the United States under rules of the World Trade Organization. Its new ambassador to the WTO is considered a heavyweight who was Mexico’s chief negotiator for the Trans-Pacific Partnership. The president also recently hosted the foreign affairs minister of Qatar and will meet in two weeks with the economic minister of Russia.

“There’s a tendency to think of Mexico as this pretty thing, sort of avocadoes and tomatoes, but it has ventured into these advanced technological industries,” says Laura Macdonald, a Canadian political scientist who studies NAFTA. “I think part of this game is Mexico’s search for respect.”

NAFTA was expected to lead to economic surge in Mexico, and although that didn’t happen, the agreement has led Mexico to a trade surplus with Americans, at about $63 billion and rising. The economy has shifted from oil toward producing machinery, medical and optical instruments and furniture and bedding, and since Canada more closely competes with the U.S. on softwood lumber and cars, “in a way you’re at greater risk,” says Luis de la Calle, a Mexican economic advisor who flew to the negotiations in Washington Friday. “If the United States turns protectionist, [it’ll also] turn protectionist against Canada.”

RELATED: Trudeau flies to Mexico amid fears NAFTA could end

Working in the office of President Peña Nieto, one staffer says Mexico has been trying to convince Trudeau to visit since he got elected. It took a trade crisis to get him there, and the staffer, who observed the meeting, said they divided the 90-minute conversation into two: the first half discussing NAFTA, the second half discussing Indigenous women, climate, energy and migration.

Some Mexicans worry about this North America free trade disagreement, concerned that Mexico put all its eggs—and sugar, soybeans, appliances, economy—in one basket. Senator Dolores Padierna recalls a recent meeting between the senate of Mexico and the secretary of foreign affairs. When he spoke about Canada’s role in NAFTA, Padierna was the only one who stood up to say they could get thrown under the bus. She believes her colleagues are in denial about their reliance on the States. “We bet everything on an agreement,” she says.

But for other senators, and much of the Mexican public, they have confidence Trudeau will remain an unconditional friend. When he addressed the senate on the last day, Senator Paz Maria Beristain dashed through the crowd to get her photo with him. She talked her way past Mexican guards, rammed her way past Canadian ones, and alas permeated the mob around the celebrity, who the day earlier had helped pack emergency noodles and baby supplies at the Red Cross for victims of earthquakes, who’d become glorified as the powerful, the gentle, philanthropist-king of the north.