What really happens to the clothes you donate

A clothing grader in Brampton, Ont.—which buys unsold, used clothing and sells it to buyers across the globe—provides a glimpse into one of the world’s largest second-hand clothing economy hubs 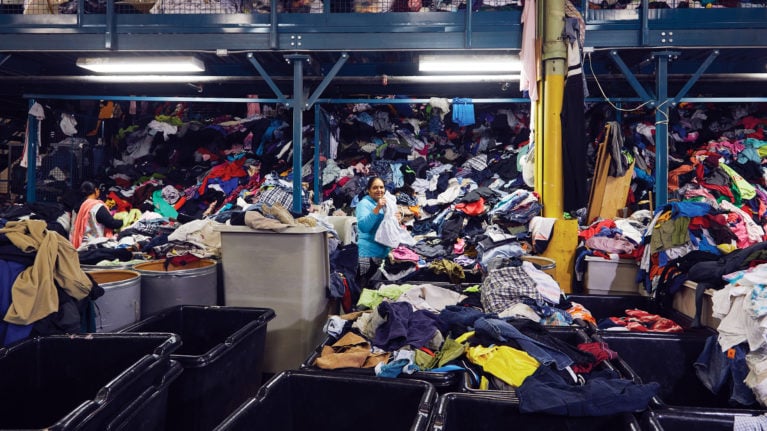 Toronto Textile Recycling buys donated clothing, and employees sort and grade each piece before the clothes are sold around the world (Photograph by Christie Vuong)

Inside the 33,000-sq.-foot warehouse of Toronto Textile Recycling, four men working in pairs carefully load clothes into two balers. They step back, almost in unison, as the machines press down to pack the mismatched clothing into tight, rectangular bundles.

Behind them, about 100 feet away, nine women stand on the warehouse’s mezzanine, where a conveyor belt feeds them what looks like an endless stream of apparel—men’s workout shorts, women’s purses, children’s T-shirts. The women sort the clothes based on gender and age (men, women, children or babies), and use or type of fabric (sportswear, cotton, flannel, wool and more).

The garments then travel to ground level, falling into 14-foot mountains of clothing. There, more workers examine them, checking for wear and tear. The clothes are graded based on the condition they’re in.

From the outside, one would never guess that this nondescript warehouse just off Highway 407 in Brampton, Ont., is a glimpse into one of the world’s largest second-hand clothing economy hubs. Toronto Textile Recycling is one clothing grader among 40 in the Greater Toronto Area that buy the unsold, used clothing from charitable organizations like the Salvation Army and Goodwill, sort it and sell it to buyers in Africa, Asia, Central and South America, and Eastern Europe. From there, it goes to local retailers in those places to be sold to consumers.

By 2023, the world’s resale apparel economy will be worth an estimated $51 billion. It’s a full-blown global industry that, in Canada at least, has grown largely under the public radar. “Most North Americans are uncomfortable with the idea that their used clothes would be exported and used outside of the country,” says author Adam Minter, who visited this cluster of brokers and graders in the Mississauga-Brampton area while researching his 2019 book Secondhand: Travels in the New Global Garage Sale.

Many people like to believe their clothes will go to someone in their community who needs them, Minter adds, but in most cases that doesn’t happen: “There’s just so much of it.”

Few understand the growth of the second-hand clothing industry better than Steven Bethell, president of Ottawa-based Bank & Vogue, one of the largest used-clothing traders in North America. He moves five million garments a week (the equivalent of 70 tractor-trailer loads) through a business that operates within multiple silos, and trades to the graders located in areas like Toronto, Karachi and Dubai. He also owns second-hand retail shops called Beyond Retro in London and Stockholm, plus a repurposing factory in India where workers source on-trend, used materials like denim, which the company turns into new designs for high-street brands like Converse (the upper of the classic Chuck Taylor sneakers, for instance, is made with post-consumer denim).

Bethell traces the industry’s roots to the early 1970s, when Pierre Trudeau’s government opened up the country to East African Indians who were being expelled from the continent. Some of them knew the grading business. “So you have mainly Gujarati guys in Toronto,” he says, referring to the western Indian origin of many of those newcomers. 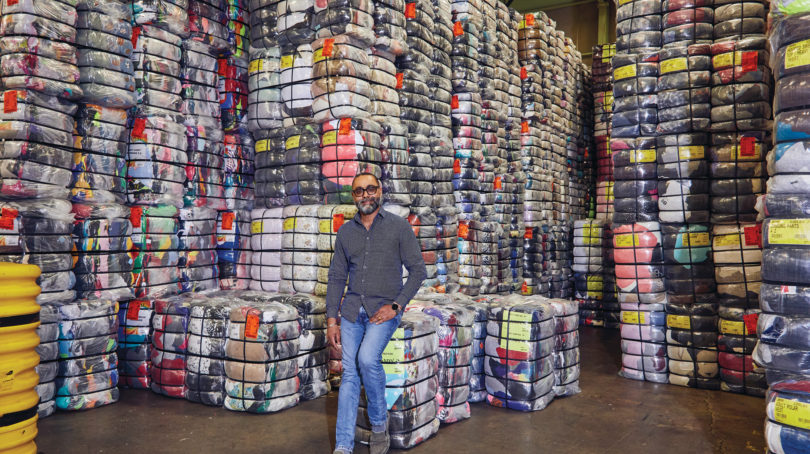 Preet Ahuja, the 44-year-old owner of Toronto Textile Recycling, has been in the clothing industry his entire life. His family owned a textiles business back in Punjab. In 2001, a friend told him about an uncle who was a clothing grader in Mississauga. When Ahuja arrived in 2004, the Greater Toronto Area had 110 graders, the largest group of such exporters in the world. He spent 10 years as a used-clothing broker—buying apparel from second-hand clothing outlets and selling it to graders—before opening his own grading company and warehouse in 2014.

Ahuja handles 250,000 lb. of clothing per week, selling mainly to importers across Africa in countries like Ghana, Senegal and Tanzania. After the garments arrive at the port, Ahuja says, the importers pass them along to middlemen in those countries, who move the bales to remote areas. There, local retailers buy them, he adds, in some places hopping on bicycles and selling them door to door.

Around 75 per cent of used goods donated to organizations like the Salvation Army are not purchased by the public in stores. That surplus, what Ahuja calls “raw material,” is sold to the graders, who sell 85 per cent of it to places where there’s a market for it, or to recyclers who make rags for the construction industry or turn cotton, wool and acrylic into fibres to make blankets or floor mats. The remaining 15 per cent goes to landfill.

Still, donated clothing can make a difference in the world—even if it doesn’t wind up on the backs of people in the donor’s community. Charities like Mission Thrift Stores use the proceeds to support literacy programs in developing countries, Ahuja notes, while the Salvation Army runs homeless shelters and food banks. Before dumping clothes into the donation bin, it’s worth finding out which organization has partnered with this donation box, whether your clothes will be sold and to whom, and how those funds will be used.

This article appears in print in the May 2020 issue of Maclean’s magazine with the headline, “Wear to go in Brampton.” Subscribe to the monthly print magazine here.