Election 2015: Who's the man with the economic plan? 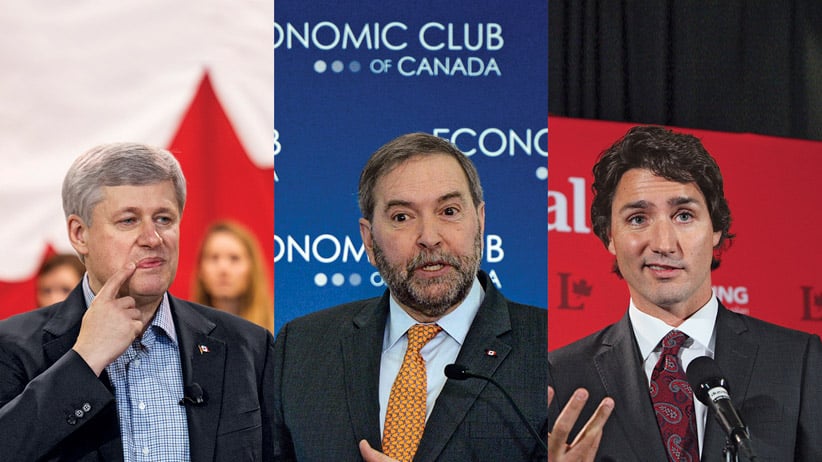 Spurred first by the oil-price plummet, and then a surprise Bank of Canada interest-rate cut, the main federal party leaders have been testing out their economic policy pitches. There’s still plenty of time for fine tuning and fleshing out those messages before this year’s election is on for real—likely as scheduled this fall, although a spring vote isn’t out of the question—but the themes favoured by all three are fast coming into focus.

“We live in an age of volatility,” Prime Minister Stephen Harper said at an event in St. Catharines, Ont., after announcing the expansion of a federal small-business financing program. Don’t expect Harper to play down the jitters. He’s hoping voters uneasy about the outlook will be inclined to cautiously stick with the governing party, rather than give somebody else a chance. So cheap oil, he said, is “creating some shocks that will impact us but they’re not going to throw us off our fundamental growth path.”

Finance Minister Joe Oliver says that promised tax cuts will proceed, federal spending won’t be cut, and yet the books will somehow be balanced this year. A forecast this week from the parliamentary budget officer suggests that’s just possible, assuming Oliver dips into his $3-billion contingency reserve in the delayed budget he’s slated to bring down in April. Failing to credibly claim to have balanced books, as Harper has repeatedly pledged, would make it much harder for him to maintain his steady-hand-on-the-tiller posture into this year’s campaign.

“The middle class continues to pay the price for our last recession,” NDP Leader Thomas Mulcair said in a speech to the Economic Club of Canada in Ottawa. As always, the challenge for an NDP leader is to persuade voters his party’s economic policies are mainstream, not lefty experiments. The words “middle class” are, at least in part, code for “mainstream.” So Mulcair frames his proposal for expanded government-supported daycare as a boon to ordinary families. He even pledged to cut the tax rate on small businesses, perhaps in a bid to offset the NDP’s historic association with unions.

Arguably more important for Mulcair, though, is turning his economic prescription into a sort of personal narrative. After all, he’s already seen as politically skilled; his weakness is a failure to personally connect. Thus, he presents his pro-middle-class message in biographical terms. “It is a fundamental part of who I am,” he said. “My family story is that of millions of Canadian families. Growing up the second oldest of 10 kids, we had to work for everything we had. It wasn’t easy. We worked hard, played by the rules and lived within our means.” 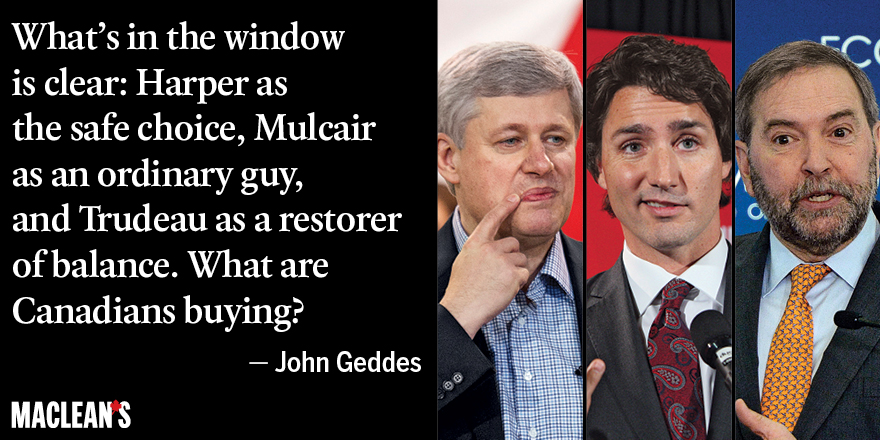 “Oil prices are through the floor and Mr. Harper has no backup plan,” Liberal Leader Justin Trudeau said in a speech to the party faithful in London, Ont. The line and the location are closely connected: Trudeau’s Liberals must pick up dozens of seats in Ontario to win the next election, and a big part of his appeal to those voters in the manufacturing heartland is that a PM from Calgary has been neglecting them out of fervour for Alberta’s oil patch.

Trudeau has been the least forthcoming with clear platform planks in this very early pre-election stage. There’s plenty of precedent for that strategy, including, in 2005-06, Harper’s own holding back of the main Tory policy pledges until the campaign was officially launched, which resulted in his breakthrough win. Until Trudeau starts unveiling more of his own ideas, his core task must be to undermine Harper’s credibility—especially in Ontario. “Mr. Harper’s economic vision neglected the things that have always made Canada prosperous: diversity, balance, and partnership between regions and sectors,” Trudeau said.

What’s in the window is clear: Harper as the safe choice, Mulcair as an ordinary guy, and Trudeau as a restorer of balance. What are Canadians buying? That answer can only come on election day.