A library revamp for reconciliation 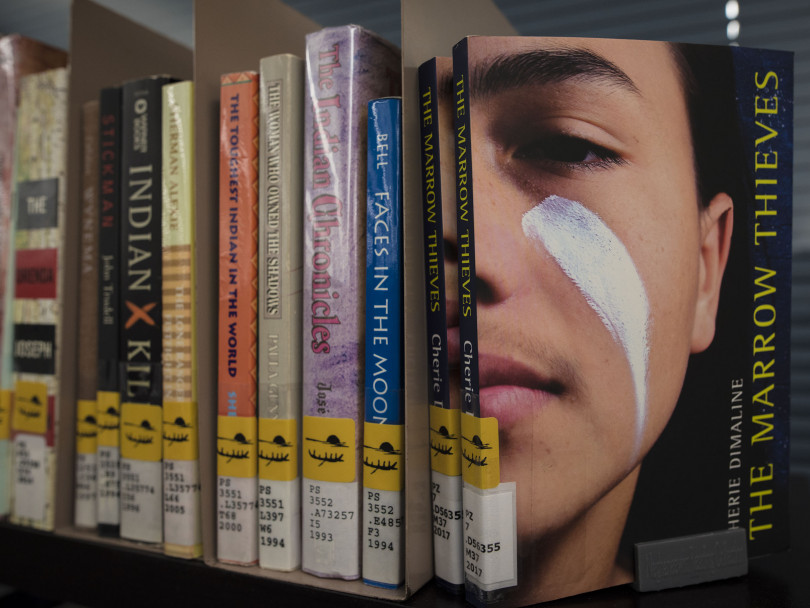 A series of books labeled with the Negahneewin logo are displayed in the library at Confederation College in Thunder Bay, Ont., on Tuesday, June 4, 2019. (Photograph by Tijana Martin)

For some, reconciliation between Indigenous and non-Indigenous people in Canada begins with a book club. The Negahneewin Reading Series, a monthly literary circle at Confederation College, brings faculty and others together to read about and discuss Canada’s relationship with Indigenous people.

“It was another way to get staff involved in learning,” says Lisa Jack, manager of the college’s Paterson Library Commons. “We found this was a way for people, through literature and poetry, to relate more to other people’s stories.”

Begun in 2007, and formally organized in 2016, the book club invites members, some of whom attend online, to read a book a month throughout the academic year on an Indigenous topic. Among their selections of First Nation, Métis and Inuit writers, book club members have read Ma-Nee Chacaby’s A Two-Spirit Journey, Maria Campbell’s Half-Breed and Tanya Talaga’s Seven Fallen Feathers.

“It’s where people feel comfortable asking the questions they may be afraid of asking,” says Jack.

At the wrap-up event this spring, participants made bannock and listened to stories told by Bruce Beady, an Indigenous language professor at Confederation from the Muskrat Dam First Nation, and an artist fluent in English and Anishinaabemowin.

It’s part of a dramatic shift at Confederation, which includes the college library undergoing a transformation driven by reconciliation.

In the coming academic year, Jack and her colleagues plan to gather Indigenous books (currently they are dispersed throughout the library) in a prominent location at its entrance. As well, the library is reorganizing its space to make room for Indigenous student artwork, and adding Indigenous signage throughout the facility. The collective approach, she says, is in keeping with Indigenous values of connections and relationships.

“We are working with the Elders and internal stakeholders and putting it together,” says Jack, who estimates that her college has one of the largest collections of Indigenous books in Ontario.

For example, books now listed under the heading of “Indians of North America” will be reclassiﬁed as “Indigenous peoples,” with subdivisions based on their geographic location.

Meanwhile, the library recently hired one full-time and two part-time Indigenous staff and plans to introduce a student book club series to extend the learning.

What’s more, this year the library provided placements for four Indigenous students enrolled in diploma programs in native child and family services, and aboriginal community advocacy. As part of their project, the students advised the library on gaps in learning resources for their programs.

Jack credits the initiatives to collaborations with faculty members, including Brenda Small, vice-president of the college’s Centre for Policy and Research in Indigenous Learning, and members of the Negahneewin Council, the Indigenous community advisory body to the college.

“We are just building that sense of belonging, and doing it in a safe zone,” says Jack.