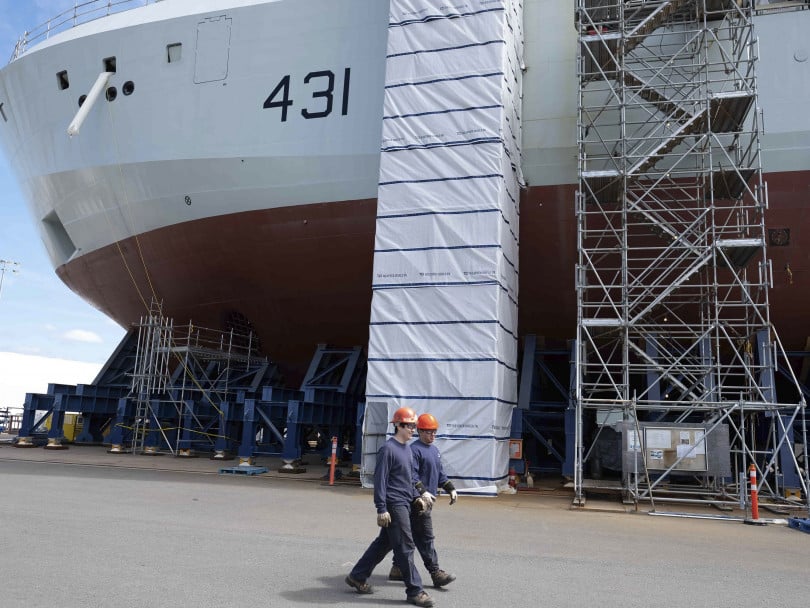 Dylan Francis, a member of Tobique First Nation in New Brunswick, knew he wanted a career in the metal trades. But getting there proved difﬁcult.

In 2015, he earned a two-year college welding technology diploma, imagining a career as an inspector. When he decided to become a welder instead, he could not ﬁnd work on his home reserve and switched to a seasonal job as a ﬁsheries technician.

Four years later, his welding career is back on track because of his participation in a new program that trains and recruits Indigenous and other historically under-represented groups into shipbuilding in Halifax. The industry now is on a $25-billion, 30-year building boom that includes the ﬁrst new combat vessels to be built for the Royal Canadian Navy in 25 years.

READ: Want a job in the cannabis industry? Try these Canadian colleges

The Pathways to Shipbuilding program, a collaboration of Indigenous community representatives, Nova Scotia Community College (NSCC) and Irving Shipbuilding Inc., ticks a lot of boxes, including workplace diversity. But for its sponsors, the program’s biggest value may be its contribution to truth and reconciliation with Indigenous people in Canada.

“It [the program] does lend itself to the work of the Truth and Reconciliation Commission,” says NSCC president Don Bureaux, citing the 2015 report on Canada’s dark legacy of residential schools. “At its core, that terrible time in the history of Canada was caused by education,” he says. “Now it is the education sector’s responsibility to help by healing and coming together in reconciliation.”

The ﬁrst round of the program recruited future metal fabricators, who assemble and weld components from engineering designs.

Of the initial cohort of 20 students, including Francis, 12 graduated last year and 10 accepted jobs offers (with the starting rate of $24.58 an hour for apprentices, rising to $36.03 per hour for a journeyperson with a Red Seal designation).

Kevin McCoy, president of Irving Shipbuilding, says the Indigenous-focused pathway program (with similar initiatives for women and African Nova Scotians) is a tool for building a diverse workplace. The 2,000-person company employs 42 self-identiﬁed Indigenous workers, up from 19 in 2016, according to Irving.

“This [pathway program] is about nothing more than talent,” says McCoy, “If you look at shipbuilding in North America, it has attracted Caucasian males. If that is your demographic to build high-end combat ships, you are down to about 45 per cent maximum of the population you are looking at.”

He went on to say how hard it is for a business to stay competitive when it only attracts a percentage of the population. “It doesn’t work,” he says.

Not all students made it through the program, some for academic reasons, but the three main partner organizations view it as a success.

“The ﬁrst time you do anything you learn along the way,” says Odette Merchant, manager of the School of Access at NSCC, which oversaw the program (which is funded through the college’s Irving Shipbuilding Centre of Excellence). She describes the Mi’kmaw Native Friendship Society as a key ally in designing a program enriched with cultural activities to promote student success.

The regular presence of an Elder in residence, and Indigenous events through the school year, sent a message to all students “about creating a welcoming, inclusive, respectful learning space,” says Merchant.

Arnie O’Toole, a non-Indigenous college instructor in the metal fabrication program, says his truth and reconciliation moment came when he attended several Indigenous events on campus. “The culture was all around me my whole life,” he says. “I didn’t understand the value and it [the events] were able to bring me full circle. It was really nice.”

At Irving, Francis now is a full-time employee working as a mid-level apprentice who welds pieces of metal for later assembly in the combat ships. He is set to receive his Red Seal in 2021.

“I can see how far I have come,” he says, reflecting on the program’s impact.

“It’s been a few years, and I have been working on it, but I have ﬁnally met my short-term goals,” he says. “I have a job, a stable career and a child on the way.”

READ: The program whose students who report the highest marijuana use: Survey

Currently, NSCC, Irving and the Friendship Society are discussing future versions of the Pathways program to recruit Indigenous and under-represented groups to other skilled trades in high demand at the shipyard.

“I talk about this being an actual truth and reconciliation project,” says Society executive director Pam Glode-Desrochers, with the partners committed to forging a meaningful relationship.

“Even though we had some major bumps in the road, we got to the point where we could sit down at the table and say ‘this is my issue’ and we would work through it,” she says.

Still, Glode-Desrochers does not sugar-coat what she sees as ongoing incidents of racism in companies, generally.

“There are some very genuine people who truly want to make a difference and want a better workplace and want to welcome diversity, but racism is still one of the major components.”

She urges recruiters to rethink hiring practices to acknowledge cultural differences, recognizing that First Nations people value humility as a trait, so are sometimes unwilling to put themselves forward in an interview.

Francis says he failed to make the initial program cut because he was “nervous and quiet” in his interview. When another student dropped out early in the program, Francis was recruited to take his spot and now wins praise as a valued employee.

His near miss and ultimate success come as no surprise to Glode-Desrochers. “You don’t brag about who you are or what you can do,” she says, noting his culture-based behaviour in the interview runs counter to the sometimes self-promoting approach of a traditional job candidate.

“People won’t come until they see more people they can identify with, both in the workforce and in staff and management jobs,” says McCoy, a former U.S. Navy vice-admiral who supported the integration of women sailors on submarines.

“We have to reach out,” he says, to promote a diverse workforce. “We are looking for excellence, motivation, drive and skills, and no one demographic owns that.”

Some graduates of the initial program have become role models in their communities.

Zach Thomas, a member of Sipekne’katik First Nation, grew up in a family that practised Mi’kmaw traditions and still volunteers at a community centre that attracts Mi’kmaw youth. “They are excited to see me, see I am working in a good job, and that can help them push toward something for themselves,” he says.

Now 25, Thomas works full-time at Irving as a metal fabricator in training, expecting to earn his Red Seal trade credentials in a couple of years.

Previously, he worked as a minimum-wage landscaper. With his new career, he says he no longer has to worry about leaving his community or Nova Scotia to hunt for a job. “The work is here, and for a long time.”