The Auntie who helps Indigenous students adjust to college life 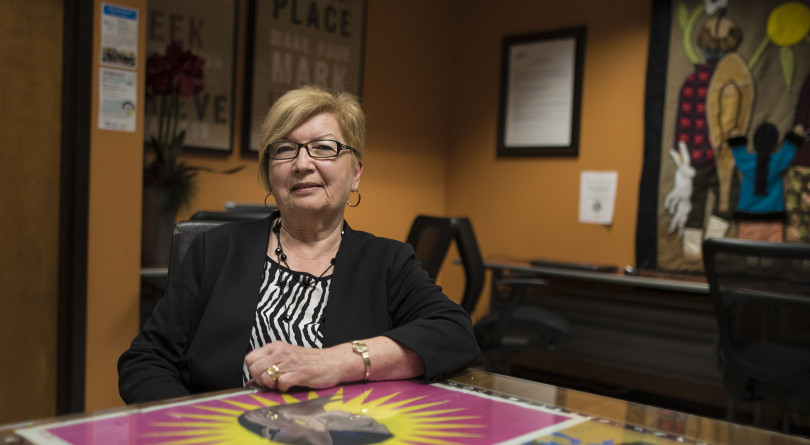 Lilian Comeau, a former proactive adviser, poses for a photograph inside Apiwin at Confederation College in Thunder Bay, Ont., on Monday, June 3, 2019. Photograph by Tijana Martin

In Indigenous families, the aunt often serves as an extra parent who provides advice and emotional support to younger relatives.

Last year, in consultation with local Indigenous organizations, Confederation College piloted its version of the Auntie to encourage incoming students, often with little or no family history of college, to make it past the ﬁrst semester.

She had retired from the college in 2005, but frequently returned for part-time roles that kept her up-to-date on policies and services affecting students. As a warm personality, the ‘Auntie’ role came easily to Comeau, who had a Mi’kmaq great-grandmother and grew up as the second-eldest in a family of 14 children, helping to raise her siblings. She is also a real auntie to numerous nieces and nephews in her family.

READ: How to help students in distress

“It was just about having a friendly approach; that did the trick,” she says, of working with about 80 ﬁrst-year Indigenous students in 2018-19. “It seemed like they could trust me.”

Students will “leave school because of a family situation, if someone has taken ill,” says Brenda Small, vice-president of Confederation’s Centre for Policy and Research in Indigenous Learning. “The other factor we have seen is that they will leave for ﬁnancial challenges.”

So last year, in the one-year pilot, the college hired Comeau, a former long-time staff member knowledgeable in student counselling, to serve as a “pro-active adviser.” In that role, Comeau extended a welcoming hand to Indigenous students when they arrived on campus, checking on them at regular intervals instead of leaving them to contact the college if they hit a roadblock.

Emily Willson, a research project manager with the centre, says that, for the outreach role, “we needed the perfect person” and Comeau was it. She built a friendly rapport with students, referring them to on-campus Indigenous resources, including tutors and Elders, and assisting with non-academic problems related to housing, child care and personal ﬁnances.

Initially, only a few students showed up to open houses held during the month. Over time, often with food as an inducement to attend events, students started to respond to Comeau’s inquiring “How are you doing?” emails. “As it progressed, I would get so excited,” says Comeau. “Even when they said, ‘Thank you, I am doing ﬁne,’ it was good, because I knew they got the message.”

Some problems were seemingly minor. When students could not afford to buy calculators for accounting class, Comeau directed them to the library to sign out the free equipment.

Others were more serious. When a student conﬁded in Comeau about his mental health issues, she immediately sought the help of on-campus Indigenous counsellors who quickly set up a medical appointment. “The semester had just started and I could feel this person really needed help,” she says. “That was the moment when I felt I had helped this person continue [at school].”

The pilot project was the subject of a research study by Confederation’s Centre for Policy and Research in Indigenous Learning and the University of Ottawa’s Education Policy Research Initiative (EPRI).

In their study of naadamaage (“one who helps people”) at Confederation, the Centre and EPRI compared a control group of self-identiﬁed Indigenous students to another group, also Indigenous, given “intrusive” support by Comeau. The level of “persistence”—those who moved on to second semester—was about eight percentage points higher for those receiving proactive assistance compared to those who navigated college services on their own.

“We know—statistically—this had a positive impact,” says Willson.

Moreover, she says, the pilot project led to a heightened appreciation of what “learners need to persist and succeed.” Even if college services exist, she says, “Students are not going to access them if they are not aware of them, and the proactive advising addressed that major gap.”

Based on the study’s ﬁndings, Confederation is developing a plan to expand the role of existing Indigenous student advisers this fall to add the outreach role performed by Comeau over the past year.