As part of this program, undergraduates have an opportunity to do ﬁeldwork with signiﬁcance 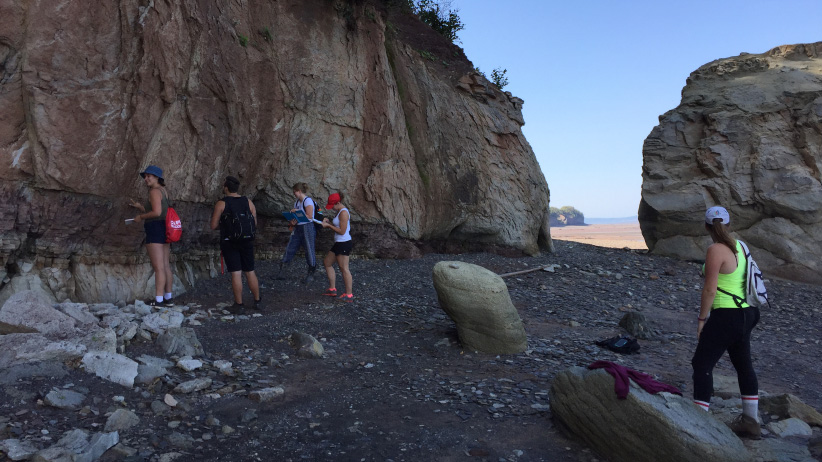 Students of Acadia’s Geoscience program at the Bay of Fundy. (Ian Spooner/Acadia University)

In a small community in northern Nova Scotia, a pulp and paper mill has been spewing contaminated water into the nearby lake for the better part of ﬁve decades. Now, the provincial government is calling for Boat Harbour—currently full of black, gooey sediment—to be restored to its original state as a tidal estuary that once carried fresh water to the open sea.

It’s a $133-million process involving dozens of consultants, seasoned scientists and Baillie Holmes, a fourth-year environmental science student at Acadia University. Her job is to drill into the lake floor, extract sediment cores, examine how the concentration of various heavy metals has changed over the years and compare them to a non-contaminated lake. That information will be given to the Crown corporation coordinating the project to help guide the remediation effort.

Rarely does an undergraduate’s thesis carry so much influence on a consequential project. “I’m over the moon,” says Holmes. “It’s overwhelming in some senses, but it’s exciting. I feel really fortunate to be in this position, to work with these people so early in my career.”

At Acadia, that interaction is possible because of small class sizes, ranging from about 40 to 100 students, and access to the ﬁeld, which gives students the hands-on experience needed to jump into big industry projects immediately after—and often before—graduation.

Located in Nova Scotia’s Annapolis Valley and a stone’s throw from the Bay of Fundy, Acadia’s environmental science students are surrounded by a rich and diverse landscape. Holmes lights up as she explains the wealth of igneous, metamorphic and sedimentary rocks, and the geological layering and stratigraphy in the area. “Within 15 minutes we can be on-site,” says Ian Spooner, a geoscience professor and head of the earth and environmental science department at Acadia. In his courses, those sites typically include beaches, cliff faces and properties threatened by erosion.

Along with the general environmental science program, Acadia offers specialized geoscience and geography streams. All cohorts are rigorously scientiﬁc and hands-on. About half the students participate in the co-op option, which requires a modest minimum GPA to qualify, and they graduate as accredited environmental scientists. Geoscience grads are also qualiﬁed to apply for their licence as a registered professional geoscientist. “That’s no small thing,” says Spooner. “To be as small as we are and make sure they get a program that’s useful to them immediately upon exit, that means we care.”

That responsibility to do right by others is built into the curriculum, too. Students—many of whom will go on to do consulting and environmental impact assessments on sensitive lands—take policy courses that emphasize the importance of gaining social licence for the work they do. “It’s not just knowing about rocks and minerals,” says Spooner. “The community, in the broadest sense, has to be involved, and there has to be an eye toward long-term effects and impacts when it comes to development and exploration in an area.”

In keeping with that philosophy, Holmes is working closely with the Pictou Landing First Nation near the waste water treatment site where she’s studying. “[Being] connected with members of the community in the area gives incredible perspective,” she says, “and it’s quite common at Acadia. Students are really encouraged to consult with the community and seek out their narrative.”