How YukonU, the first university in northern Canada, is finding its way 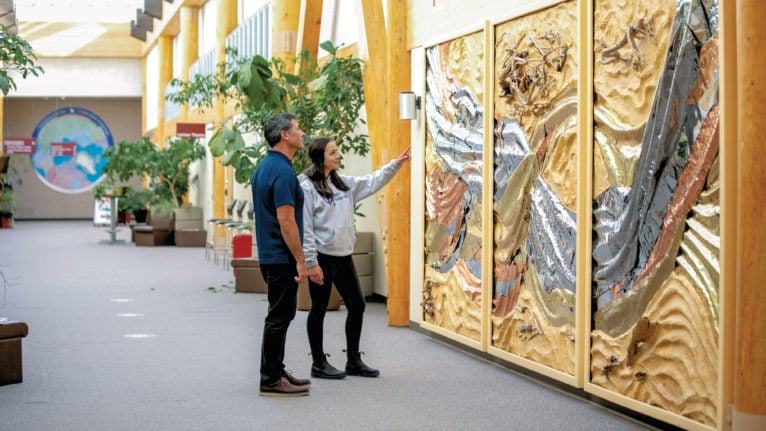 Massie and her dad, Jay, on the main campus of Yukon University in Whitehorse (Photograph by Crystal Schick)

This year, 17-year-old Brooklyn Massie had to make a choice that was previously unavailable to Yukon residents: whether to earn her degree at a university in southern Canada or right at home in Whitehorse.

She decided to join the incoming class of Yukon University, the former vocational school and college that last spring became Canada’s first university north of the 60th parallel.

“It feels great to be part of the first year of the first university in northern Canada,” says Massie, who is a member of the Ta’an Kwäch’än Council, one of 11 self-governing First Nations in Yukon. Her grandmother is a former chief of Ta’an Kwäch’än and her father serves on its council. A summer job with Ta’an Kwäch’än wildlife officials sparked Massie’s interest in a possible career with her Whitehorse-based First Nation. “I want to help my people,” she says.

Both Massie and her father, Jay Massie, see her liberal arts program at YukonU, which includes a course on First Nations governance, as a step toward that goal. “I am hoping my daughters get the education they need to be part of the broader community, the Yukon and, of course, our First Nation,” says Jay. “We [at Ta’an Kwäch’än] are not any different than most First Nations [that see] youth as the key to success going forward. Now we have a strong resource here in Whitehorse where we can give them the tools to succeed.”

Defined by its “in the North, by the North, for the North” identity, YukonU’s ambitions range from tackling climate change and sustainable resource extraction to Indigenous reconciliation. The school has a collaborative relationship with the territory’s First Nations, and Indigenous students account for 28 per cent of 1,250 full- and part-time students. The First Nations name three of 17 university governing board members, and the academic senate must ensure 30 per cent First Nations, Métis or Inuit membership. University staff and for-credit students complete a mandatory course in Indigenous knowledge, history and culture, while First Nations representatives advise the president on support programs and curriculum. This fall, James Allen, former chief of Champagne and Aishihik First Nations, was named YukonU’s chancellor, a position that includes voting rights on the board.

But consultation between the school and Yukon’s First Nations has not always gone smoothly. When Karen Barnes joined then-Yukon College in 2008 as a vice-president, her academic colleagues were at an impasse with the Champagne and Aishihik First Nations, who had proposed a for-credit program to strengthen the managerial capacity of Indigenous-run governments.

“There was quite a bit of tension; the [two] groups were very positional,” recalls Barnes, later a two-term president who campaigned for university status. “Our group was very insistent that they had full academic control, and the First Nations representatives were saying, ‘We need to have input into this, and flexibility.’ ”

Risking ruffled feathers, Barnes took over the negotiations from her staff. Over 18 months, she met with a top education representative of Champagne and Aishihik and a senior official of the Yukon government (which had oversight over the college) until the three hammered out a certificate in First Nations governance and public administration in 2010.

The certificate represented a powerful tool for Indigenous leaders and managers to breathe life into hard-won self-governing agreements. “We saw we were losing bench strength at the senior [government administration] level,” says Champagne and Aishihik chief Steve Smith, whose father, Elijah Smith, led a lands-claim delegation of Yukon First Nations chiefs to Ottawa in 1973.

In addition, the certificate provided flexible learning for working adults, short periods of in-classroom learning and tutor support at home. The certificate later became the foundation for a signature YukonU program, a three-year bachelor of arts in Indigenous governance that yielded its first two graduates last spring.

One of them is Teresa Samson, the heritage manager of the Nacho Nyak Dun First Nation’s government, who completed the certificate and later returned to pursue the bachelor’s degree. The 41-year-old mother of two studied from home in Mayo (one of 12 community campuses), describing it as a “very empowering” experience. “I have got an education with relevant information I can use in my own First Nation,” she says.

Barnes says the discussions between First Nations leaders and the school on curricula reflect a “symbiotic” relationship rarely seen in Canadian post-secondary education. Smith agrees. “We are far beyond the rest of Canada in terms of our co-management [of programs],” he says. He adds: “If you want to involve us, you need to at least appreciate we have a different way in which we look at the world . . . Yes, we want to have a good contemporary education, but it also has to be grounded in our way.”

In September, Michael DeGagné resigned after only three months as YukonU president to become head of Indspire, a national charity for Indigenous education. Stating it was “disappointed” at the news, Yukon named Maggie Matear, vice-president of university services, as interim president pending the selection of a new leader in a year. “There is a lot to look forward to and a lot to still be excited about,” says Matear. “This is a blip.”

One priority is a new strategic plan to be drafted with Indigenous and other stakeholders to identify where YukonU should focus its energy over the next five years. “We are developing a reputation for doing really innovative research around climate, sustainability issues and Indigenous reconciliation,” says Matear. “I hope our elevation to university status will attract attention from others [in Canada] so they will see what we are doing.” 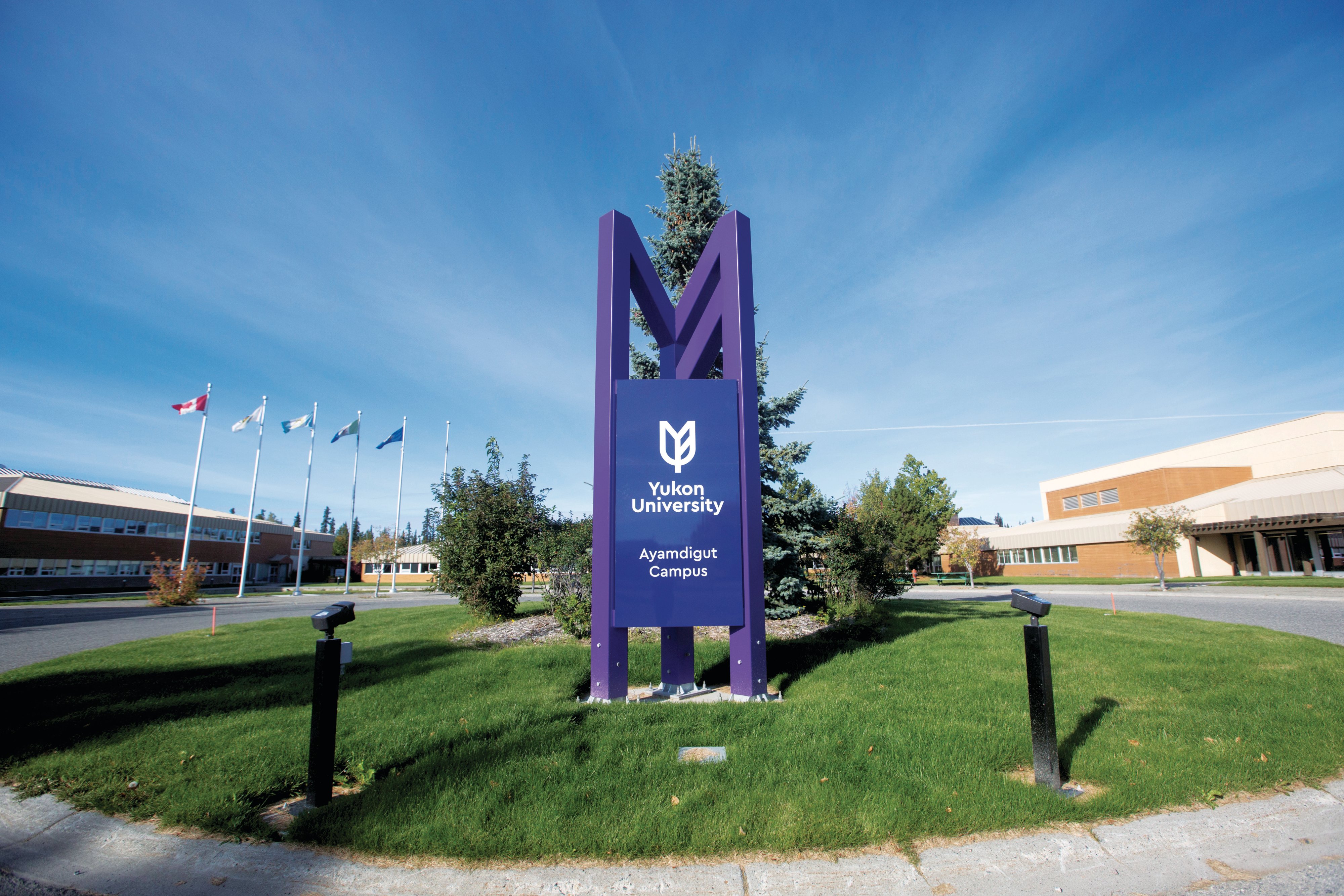 The entrance to the main campus (Photograph by Crystal Schick)

“It’s the missing thing we have been looking for,” says Michael Hale, president and chief operating officer of Northern Vision Development, a private real estate partnership that was founded in 2004 and has 40 per cent First Nations ownership. “[Yukon has] been very much about mining, tourism and government, but we have always been looking for other sustainable drivers that will have a material impact on how we forecast our future.” Unlike an aging mine, says Hale, a university serves as a sustainable resource to attract and retain talent in the North, spurring demand for housing and employment.

Yukon Deputy Premier and Minister of Economic Development Ranj Pillai says the former college has already done “an exceptional job in bringing in research dollars.” He thinks additional funding for local university researchers, not just those who briefly fly in from southern institutions, “will light so many key parts of our economy.”

Pillai is banking on YukonU making its mark on climate change research. Last year, YukonU received $368,000 from the federal government (and a separate $400,000 from the Bank of Montreal) to study thawing permafrost. Ottawa has also pledged $26 million for a new science building, scheduled to open in 2023, with programming that blends Western scientific and Indigenous knowledge. According to the territorial government, Yukon’s average temperature increased by 2.3° C between 1948 and 2016, and winter temperatures increased by 4.3° C over the same period, raising alarms for building design, food security and traditional hunting in remote communities.

“As we deal with wildfires and threats of flooding, how do we adapt and build infrastructure that will last?” asks Pillai. “[The answer is] information and best practices we can share with other parts of the globe that haven’t experienced this to the same extent yet.”

For those previously forced to leave home for higher education, a made-in-Yukon university steeped in territorial history and Indigenous perspectives is long overdue. “There is something very difficult about having to move thousands of miles away, without your family support and without any relevance to the community you come from,” says Tosh Southwick, a former deputy chief of Kluane First Nation, who earned degrees at the University of Victoria and the University of British Columbia before returning home. As outgoing associate vice-president of Indigenous engagement and reconciliation of YukonU, Southwick works with First Nations on self-governance and academic success for youth. “The creation of Yukon University is not just good for Yukon First Nations and the Yukon, it is good for all of Canada,” she says. “We have for generations seen so much expertise come from the south and people from the south being asked to solve northern problems.”