Faculty join call for a ban on relationships between staff and students, among other changes 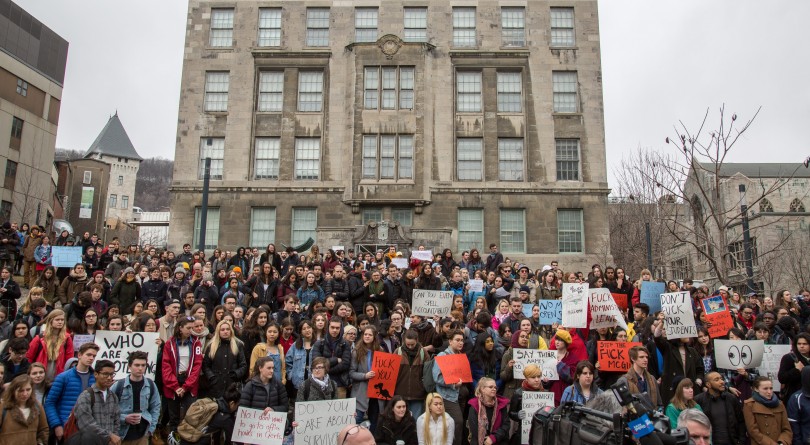 Hundreds of students from McGill and Concordia universities gather on the McGill campus in Montreal, Canada on April 11, 2018 to call for action over sexual violence allegations against professors at both schools.


In my second year at McGill University, I enrolled in a political science course taught by Professor X, who was revered by many students in the major. It wasn’t until halfway through the semester that I first heard the rumours of Professor X repeatedly coercing his female graduate students into sexual relationships.

Rumours of predatory professors are prevalent on McGill campus. Whispers of who not to trust are shared between friends, passed on from year-to-year and advertised on stickers in bathroom stalls. The names of the same professors seem to come up time and time again. And as a former student of a professor with allegations of sexual violence against him, I sometimes wonder if McGill’s administration is really looking out for its students.

Luckily, McGill students are capable of looking out for themselves. On April 4, the Students’ Society of McGill University (SSMU) published an open letter to McGill administration demanding that it “launch a third-party investigation into the Office of the Dean of Arts on the handling of informal and formal complaints directed against faculty members.” The letter mentioned five departments in particular—history, philosophy, political science, psychology, and Islamic studies—with professors “known by students to be abusive.” The students want a review of procedures to determine whether systemic failures have enabled serial predators to continue teaching.

As it stands, McGill lacks coherent, decisive mechanisms to support students who experience sexual harassment or violence by professors. While the McGill Policy Against Sexual Violence technically applies to all members of the university community, faculty offenders are processed under distinct, internal mechanisms. Furthermore, while McGill’s policy acknowledges that abuses of power are inherently non-consensual, it does not explicitly forbid relationships between students and faculty.

SSMU’s call to action has since amassed almost 2,400 student signatures. McGill’s response has been largely dismissive. The administration has not pledged to take any further action to address the students’ concerns, or even acknowledged that there is a problem with abusive professors at the University.

An April 10 email to students on behalf of Professor Christopher Manfredi, provost and vice-principal academic said: “It is not the case that McGill’s leadership ignores reports of sexual misconduct by members of our community. Every formal report or complaint, and every allegation that contains sufficient facts, is duly investigated.”

But Connor Spencer, vice-president external of SSMU, believes McGill’s current policy framework fails its students. In her role as a student representative, Spencer has witnessed firsthand McGill’s unwillingness to address student concerns. At one point, Spencer approached administration with a dossier of evidence regarding a female student that was being targeted by a professor. McGill did nothing to protect the student, she said.

“McGill administration has always been quick to defend its existing procedures,” Spencer said. “It often presents the narrative of, ‘Well, we have this complaints process in place, therefore it’s really students’ fault if sexual predators remain on campus because that means students are not using the procedures that are out there.’”

But the current procedures are not working, students say. Ariella Garmaise, a third-year arts student and editor at The McGill Tribune, wants to see the school develop a uniform policy on sexual violence that holds all alleged perpetrators—students and faculty—to the same rigorous standards.

“A huge issue with McGill’s policy is that it is really unclear what disciplinary measures are taken against faculty members accused of sexual violence,” Garmaise said.

Sexual violence complaints against McGill students are processed under the code of conduct, whereas faculty offenders are covered under the tenure policy. Any disciplinary processes pursuant to the tenure policy are classified. The school excuses this secrecy by citing confidentiality requirements under Quebec labour laws, according to Garmaise. “To truly protect students, the university needs to be more transparent about how it is actually investigating these issues,” she said.

Students are not the only ones who want to see change. Nearly 150 McGill professors signed a letter published April 16 in support of students fighting for transparency and accountability, urging McGill “to institute a clear policy that prohibits sexual relationships between students and faculty who are in a position to influence their careers.”

Jarrett Rudy, an associate professor of history, signed the collective letter of support. He sees the lack of concrete regulations surrounding professor-student relations as a facilitator for abuse. “The secrecy of the system [has ensured that] professors can get away with all kinds of things and there’s no system in place to discipline professors who act inappropriately,” Rudy said, adding “We all want students to feel comfortable in our classrooms and not be worried about what could happen. It has a negative impact on all of us.”

It’s not only the rules on professor-student relations that are unclear, but also what happens when a complaint is filed against a faculty member. “The real problem is that even if and when justice is done, no one can know. Because the process is so secretive, students have no way of knowing—short of a professor actually being fired—if disciplinary procedures occurred,” said Jonathan Sterne, professor in the department of art history and communication studies. He signed the letter because he wants students to know that many professors care about their safety.

McGill is not alone in its failure to implement an effective sexual violence policy. Our Turn, a Canadian student movement that addresses sexual violence on campuses, published “A National, Student-Led Action Plan to End Campus Sexual Violence” on Oct. 11 2017. The report analyzed sexual violence policies from 14 post-secondary institutions across the country and gave each policy a letter grade. McGill’s Policy against Sexual Violence­ received a C-, ranking 8th out of the 14 schools.

Caitlin Salvino, chair of the National Our Turn Committee, said that the ambiguity of McGill’s policy is a detriment to student safety, potentially dissuading students from reporting cases of sexual violence. Compounded by this is the fact that survivors are dealing with perpetrators that have massive influence over their academic careers.

In an emailed statement in response to this article, McGill administration reaffirmed its commitment to working with students to adapt the Sexual Violence Policy. “When McGill’s Policy against Sexual Violence was adopted in 2016, we committed to an iterative process that would involve ongoing review and reflection as to whether the Policy was meeting its objectives concerning sexual violence response, support and education …. Our main concern is the safety and well-being of our students and all members of our community,” said Louis Arseneault, vice-principal communications and external relations at McGill. School officials met with student leaders on April 18 to discuss the handling of sexual violence cases.

However, six months after the Our Turn report was initially published, McGill has yet to address criticisms of its policy or implement any of the recommendations for improvement, such as consolidating its procedures into a single, stand-alone policy with transparent procedures for allegations against both students and faculty.

On March 11, SSMU and the Concordia Student Union co-hosted a walk-out on McGill campus to pressure McGill and Concordia administrations to take action. Addressing a crowd of nearly 1,000, SSMU VP External Spencer asked students to raise their hands if they had ever heard of an abusive professor, like Professor X, during their time at McGill. Almost every hand shot up.

Alexandra Harvey is a fourth-year honours political science student at McGill and opinion editor at The McGill Tribune.