Dick and Jane go potty... together

The perils of co-ed washrooms 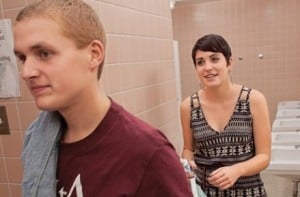 From the 21st Maclean’s University Rankings. Get your copy today!

Some call it “the can,” others, the final frontier of gender equality: It’s the public washroom and it’s gone co-ed. Even though single-sex facilities are still the norm on the majority of Canadian university campuses, you’d be hard-pressed to find a school that doesn’t have at least one co-ed washroom—and it usually includes shower stalls. McGill, York University, the University of Toronto, Dalhousie, Mount Allison and the University of British Columbia are just a few of the “progressive” (or backwards, depending on your lavatorial leanings) co-ed washroom providers, earning the approval of campus feminists who view mixed facilities as a positive step towards full gender equality. Others, however, are not convinced. One 18-year-old Queen’s University psychology major says she was relieved to live in an all-girls dormitory solely because of the same- sex bathroom factor. Co-ed washrooms struck her as “grosser because boys used them,” says Jessica, now in her second year and living off-campus with a washroom of her own. “The girls’ ones were generally very clean.” Jessica would regularly make the five-minute walk back to her all-girls dorm from the co-ed dorm where many of her girlfriends lived, simply to avoid using the washrooms there. “It just smelled so much worse,” she says, before conceding, “maybe I just have bathroom phobia.”

Maybe she needs “to stretch the limits of her social etiquette.” Those are the words of Jonathan Kates, a 21-year-old York University student who says he’s never felt uncomfortable in a co-ed washroom. He suggests that people who don’t feel at ease doing their business in the same room as the opposite sex simply “need to grow up.”

“Does stuff happen in there that you may want to forget?” Kates asks. “It’s possible, but it’s a learning experience for how to deal with potentially awkward situations.”

Some of those awkward situations include (from the female perspective) straining not to produce any mortifying sound effects when a male shadow appears beneath your stall door, and (from the male perspective) having to make small talk with girls when you’re at the urinal and they’re at the sink, which is especially difficult for guys who have trouble making small talk with girls in general. Then there’s the shower issue, something I remember well from my own first-year experience at the University of King’s College in Halifax, where washrooms were unofficially co-ed, especially on co-ed floors. The shock of moving from your parents’ home—where, in all likelihood, you weren’t allowed to have a boy in your bedroom—to a co-ed living space where you can openly shower with one, takes some getting used to.

Wendy Shalit, an American blogger and author of A Return to Modesty, argues that students shouldn’t have to get used to it. “There is no ‘right of exit’ in today’s immodest society,” she writes, noting that current mixed gender policies may be just as radical and inflexible as the gender segregation that prevailed on campuses 30 years ago.

Even Kates, though unabashedly pro co-ed washroom, admits that he has “held back a bit” when using facilities in the presence of the opposite sex. However, any inhibitions he has are leavened by what he calls the “unwritten rule” of the co-ed washroom: “It’s like Vegas— what happens there, stays there,” he says.