What I learned from Princess host Gail Vaz-Oxlade 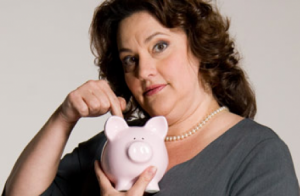 After years of watching her TV shows Til Debt Do Us Part and Princess, I got the chance to listen in person to Gail Vaz-Oxlade discuss her Money Rules earlier this week on campus. Moneyaftergraduation.com and the University of Alberta’s Student Financial Aide Office hosted the free event. After an hour and a half, I felt less afraid of the sometimes ruthless world of money. I’d like to share five rules that stood out for me.

By “bullsh*t,” Vaz-Oxlade means your monthly minimum credit card payments. Every credit card owner should pay more than the minimum. Those seemingly low payments required each month are meant to keep you in credit card debt for as long as possible, so you pay more interest overall. Oh, and the same go for student loans. “Aggressively pay down your debt”, says Vaz-Oxlade. She says students in debt should only worry about savings after they’ve paid off their loans.

Rule 2: Take on no more than one year of your future net income in student debt.

Vaz-Oxlade says this is a well-known rule of thumb, but I’d never heard it. Apparently every student should try to graduate with less student debt than their projected net income in their desired job. So if your career starts out paying $30,000-a-year after taxes, you shouldn’t have more student debt than that. (Law students, for example, can borrow more because they will make more.) Otherwise it eats up too much of your income, “and you won’t have a life for a very long time.”

I’ve heard of using a grocery list before, but Vaz-Oxlade recommends that to be a smart shopper, bring a book with what you’ll be buying that day and how much it will cost. For those who claim they are too busy, Gail says: “Did you finish Halo 4? You have time to make a price book.”

I guess I won’t be getting that twenty dollars I lent my friend Simon last week. “If you expect lent money back, you have the wrong expectations,” says Vaz-Oxlade. Before giving a friend or loved one any money, she recommends asking yourself if it is money that you are willing to part with permanently. If so, lend away. If not, politely decline (and offer to help them make a budget).

Rule 5: There is no such thing as a payment holiday.

Payment holidays aren’t as kind as they seem. Vaz-Oxlade says that, in the real world, there’s no such thing as a break from paying credit card bills. “Any payment skipped has interest attached,” she says, adding that you should make credit card payments every month without exceptions.