Emma Teitel on the controversy at Simon Fraser University 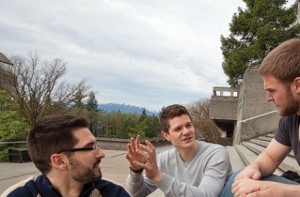 Photo by by Brian Howell

On May 1st, my friend Josh Dehaas wrote an article about a Simon Fraser University student named Keenan Midgley who wanted to start a “Men’s Centre” to complement his university’s “Women’s Centre”–the kind that exists on nearly every Canadian university campus today.

Like the women’s centre, the men’s centre would provide a safe space for its respective gender, one in which to discuss (to quote former SFSS president Jeff McCann) “men’s issues and mental wellness and all the different things that come along with that.” As Keenan Midgley pointed out to Dehaas, suicides, alcoholism, and drug use, are more prominent among young men than they are among women. Not that it’s a competition.

Or maybe it is…

That’s the impression I got from this video, created, I suspect, by some of the most unsympathetic and over-educated people on the planet (I actually lost count of how many times one of the interviewees uses the phrase “hegemonic patriarchy.”) At no time did Midgley or McCann (who was on the CBC this morning promoting his cause) suggest that their proposed men’s centre would curb women’s rights or extract funds from the school’s existing women’s centre, but the people in this video—and those opposed to the very idea of a men’s centre in general—are under the impression that a safe space for men is a dangerous place for women. Or as some of the video’s contributors warn, “a highly masculinized space… a room with a PS3 and a bunch of douche bags playing video games”…

Which is awfully strange because you’d think that women wary of stereotypical fraternity culture (i.e. a room full of douche bags) would be the first to embrace the men’s centre. After all it’s fraternity culture—the kind that assumes men don’t need safe spaces in which to discuss their feelings and insecurities; the kind that lauds cat calling and “slut shaming”— that the men’s centre would likely do without.

Either way, however, calling McCann and Midgley patriarchal, hegemonic, douche bags is not a valid argument against their proposal. Neither, for that matter, is weighing your group’s struggles against another’s. Just because group A (insert women/Jews/blacks here) has more problems than group B (white men) doesn’t mean group B shouldn’t seek help.

Or deserve a safe space of its own.