Canadian schools have crazy fans and community too 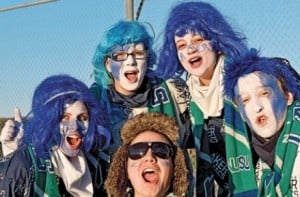 We’ve all seen it: the near-ubiquitous image of the spirited American college student chanting a school slogan, streaking across campus or slogging back a beer from a Dixie cup in a stadium parking lot. It’s the sort of paint-your-body zealotry often depicted in Hollywood movies.

Doesn’t seem very Canadian, does it?

Certainly not according to the 2010 edition of The Insider’s Guide to the Colleges, a yearly publication out of Yale University that documents the strengths and weaknesses of North American universities. “One aspect of college life that Canada fails to offer is school spirit,” the guide stipulates. “Their attachment to their schools is not as strong as in the United States.”

Hold on there, Yale. School spirit in the land of peace, order and good government might not be flaunted American-style, but that doesn’t mean students here don’t feel a deep connection with their institutions of higher learning. Actually, school spirit in Canada may be more robust than ever. And the key difference, according to students and administrators at Canadian schools, is that spirit here is embodied in a sense of pride and passion for one’s university and the community that surrounds it—rather than in the rise and fall of varsity sports teams.

“I think at a lot of the Canadian universities, it’s a lot more about school spirit in terms of defining what this campus is about and who we are,” says Morgan Campbell, president of the student government at Queen’s University, who grew up in the U.S. “What’s the initiative of this place, as opposed to comparing ourselves to other schools.”

At schools like Queen’s and the University of Western Ontario, years of prideful tradition have led to a deep sense of community and purpose, says Campbell. But other schools have managed to create a similar atmosphere—a sense of belonging to something bigger than a series of parties and exams—that makes Canadian school spirit a force to contend with.

Nipissing University, located in North Bay, Ont., is one such school. Trina Prince, 22, a former Nipissing student now working for the university, says fervour for the school has grown significantly since she first arrived five years ago. “The number of people who get involved is absolutely amazing,” says Prince, who estimates that between 90 and 95 per cent of Nipissing students participate in either athletics or extra-curricular clubs.

But school spirit wasn’t always so strong. “We’re still a very young school,” she tells Maclean’s, adding that Nipissing only became a chartered university in 1992. As an undergrad, Prince started a program called “the Maniacs,” in which students don logo-emblazoned pyjamas, blue wigs and face paint, and go to sports games and school events to rouse crowds. These costumed symbols of school pride have been a leading force for spirit at the institution, says Laura Shutiak from the school’s office of external relations. This year, in their second-ever homecoming celebration, the keynote hockey game sold out quickly, says Shutiak. “I was just blown away.”

Prince says attendance at orientation week events has been climbing for years, and the university’s social media presence is helping draw more students to hockey games—even though the school only has about 4,000 full-time students, the Lakers hockey team draws some of the largest crowds for university hockey in Canada.

But that doesn’t mean the school is lacking in the pride department. “We have a high energy on campus. People are just excited to be here, and they are excited because of the kinds of things that are being put in place,” says Provost and Vice President (Academic)* Dru Marshall.

The university recently unveiled a rebranding program called “Eyes High” meant to galvanize school pride as the institution aims to become one of the country’s top research locations. Marshall says there were over 1,000 students on hand when the strategy was unveiled. Student leaders even rapped about reasons to be proud of the school. “It was pretty amazing,” she says.

But elsewhere in Canada, school spirit has deep ties to years of tradition and community building. St. Francis Xavier University in Antigonish, N.S.—a small town that doubles in size when it takes in the school’s 5,000 students—fosters school spirit by focusing on community and tradition. “We are a family,” says vice-president of recruitment and student affairs Keith Publicover. “When we say we’re interested in students, we are genuinely interested,” he says. “I think we walk the talk.”

And it shows. Sean Riley, the school’s president, is known to turn up at parties and campus events, and knows many students by name, according to fourth-year students Danielle Dalton and Sara Doyle. “It’s an inclusive, fun-loving environment,” says Doyle.

Meaghan McNeil, a fourth-year development studies student and vice-president of student relations for the school’s student union, says school spirit at St. FX touches nearly every single student. “I don’t think it’s something that anyone on this campus can explain,” she tells Maclean’s. “It’s something you have to experience.”

Pride at St. FX is perhaps best represented by the tradition of handing out “X-rings.” Every year on Dec. 3, the anniversary of the feast of St. Francis Xavier, graduating students are given rings, made of gold and embossed with a black X, in a much-anticipated, closed-door ceremony. “It allows you to take a piece of the community and take it around with you,” McNeil says.

According to Publicover, St. FX students count down the days—often starting in first year—until they receive their rings. Many living in student houses around town, like Dalton and Royce, display the remaining days on signs in their front window. “Some of them can even do it down to the second,” insists Publicover.

Similarly, Mount Allison University, a small school with fewer than 2,500 students in Sackville, N.B., a town of just over 5,000, has a reputation for formidable spirit. “School pride here is frankly like nowhere else I’ve been,” says Ron Byrne, vice-president of student affairs. “The spirit naturally sort of bubbles up from that pride.” Byrne credits that to the institution’s ability to instill a sense of unity and belonging among students. The inculcation of that feeling begins right off the bat as first years arrive for orientation week, says Byrne. Every residence “adopts” a varsity sports team to cheer on throughout the year, and is granted points by the administration for student involvement in the university community through charity fundraising, volunteering or extracurricular activities. Byrne says it all makes for a very active and close-knit campus community. “That intimate, intensive, immersive experience is absolutely critical to what we’ve been able to achieve,” he says.

Canadian school spirit might not be as flashy as it is in the U.S., but that doesn’t mean students here feel any less attachment to their universities. “There’s a big difference between passion and zealotry,” says Byrne. “It’s not just rah rah. It’s deep and it’s manifested in a whole host of ways,” he says. “We don’t define our sense of self by saying, somehow or another, we’re better.”

Translation: we’re not pompous. We’re not overly boisterous. But we’re proud, and our spirit lies in our passion for the health of our university communities. How very understated and modest. How very Canadian.

*This version was corrected on Nov. 9. An earlier version included an incorrect title for Dru Marshall.