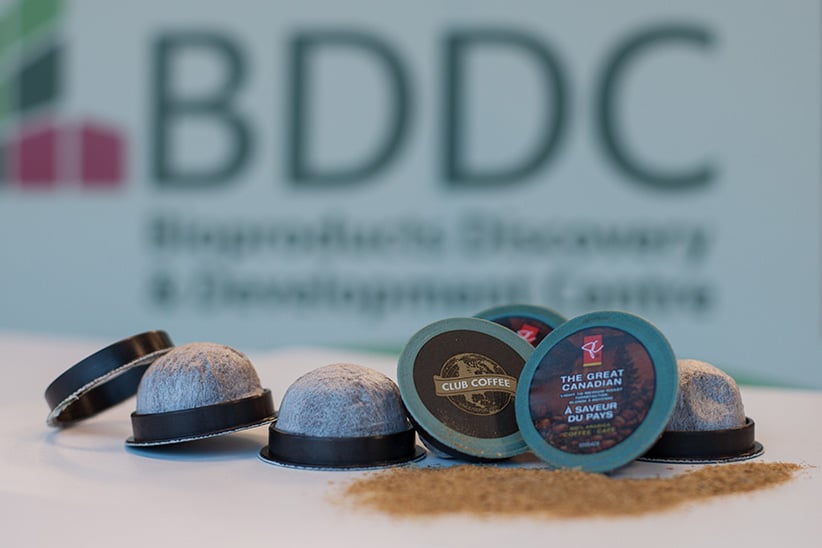 Every year, billions of single-serve, non-compostable coffee pods end up in landfills. So when Toronto-based coffee roaster Club Coffee, the largest distributor of packaged coffee sold in Canadian grocery stores, approached Amar Mohanty about reducing that impact, the University of Guelph biomaterials expert got straight to work.

“The popularity of the pods is skyrocketing and the environmental impact is huge,” says Mohanty. He is referring not only to landfill issues, but to the greenhouse gas emissions involved in sourcing the petroleum-based polypropylene plastic used in pods.

His contribution was a redesign of the ring that holds the pod together. The challenge was to create a cost-effective ring rigid enough to keep from falling apart during the brewing process. He also needed to meet the industry standard for a compostable product: 90 per cent of the material must biodegrade within six months under compostable conditions—the kind found in most municipal facilities.

Just over 20 per cent of the ring, called the PurPod 100, is made from coffee bean skins, while the rest, nearly 80 per cent, is biodegradable plastic. The coffee chaff helps speed up the rate at which the plastic degrades. It also diverts a waste product—the skins—from coffee production.

“Currently, coffee companies have to pay to dispose of it,” says Mohanty. “So we have a huge supply of free food-grade material.”

Mohanty is a committed tea drinker, but says he is already using the pods in his office and meeting rooms.