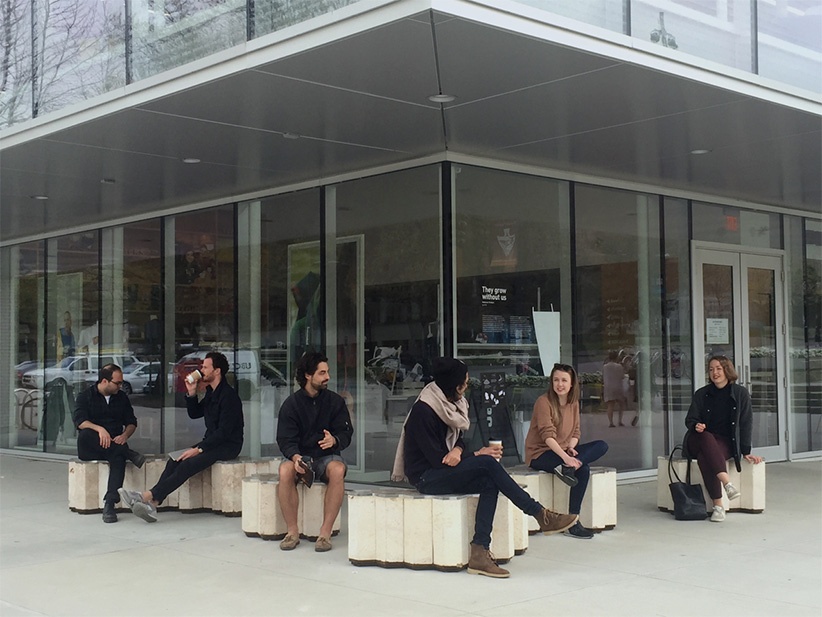 Mushroom benches outside the UBC bookstore.

A pop-up display of furniture grown from mushrooms at the University of British Columbia is boosting interest in an eco-friendly building material. The six benches, placed outside the university bookstore for a couple of months this spring, were designed as a proof of concept: the work of Joe Dahmen, a professor at UBC’s School of Architecture and Landscape Architecture, and his partner, Amber Frid-Jimenez, a professor at Emily Carr University of Art and Design.

The couple used oyster mushroom spores and alder sawdust. First they sterilized the sawdust to kill competing micro-organisms before inoculating it with spores and nutrients. The mixture incubated for a couple of weeks, so the mushroom roots can grow into the sawdust’s spaces. Then they broke up the material and put it in moulds, where it grew into the stump-like benches.

The material is known as a mycelium biocomposite, and it has about the same density as polystyrene foam, but is slightly stronger. It’s an attractive replacement for polystyrene, which is made from a petroleum by-product that takes hundreds of years to break down in the environment and has been identified as a human carcinogen.

While Dahmen hasn’t seen mycelium biocomposites for sale in Canada, a New York-state-based company called Ecovative supplies “mushroom packaging” to businesses such as the tech company Dell. The material has potential as insulation in buildings. “We are using massive amounts of polystyrene foam to drive down energy usage in buildings,” says Dahmen. “We are just now becoming aware of the impact of these foams—emissions to air and water produced by the chemicals required to make them.” Dahman and Frid-Jimenez hope to improve the durability of their mycelium biocomposite by experimenting with various bacteria known to produce water-repellent coatings.