The new faces of law school in Canada

The LPP, an alternative to traditional articling, attracts students who don’t ﬁt the traditional mould 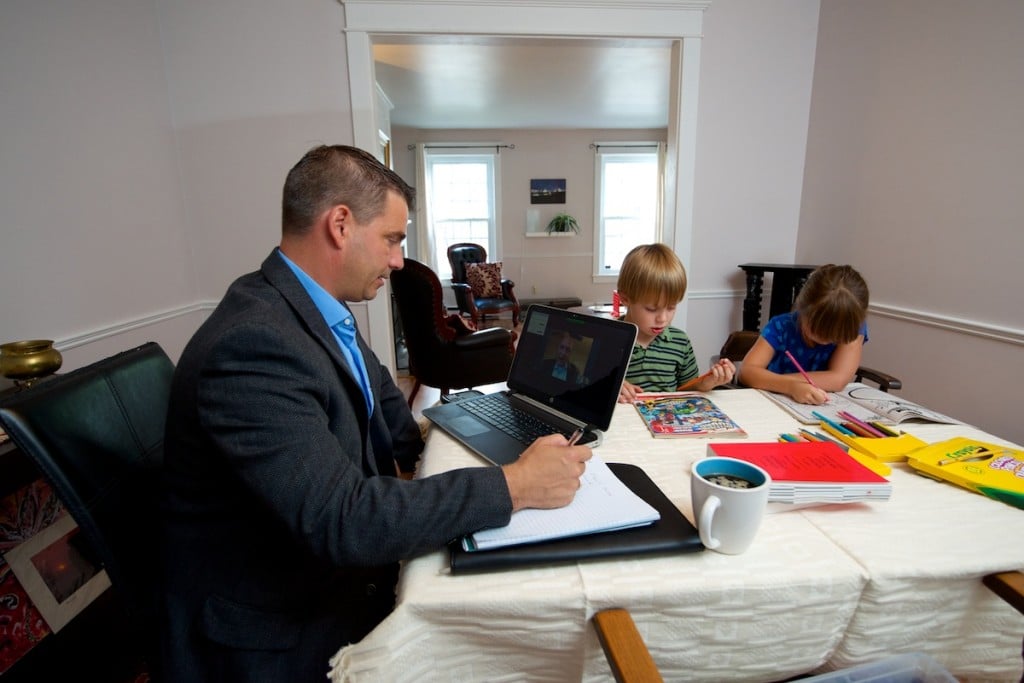 Distance learning: Eric Hill skypes from home with a fellow student in another city. (Photograph by Dean Casavechia)

For Matt Hopkins, very few things in life came easily. Growing up with a father in the Canadian military, he never really felt settled as his family constantly moved around, uncertain where they would be sent next. He was always dead set against following in his father’s footsteps, so he pursued a B.A. from the University of New Brunswick and graduated in 2007, becoming the first person in his family to get a university degree. But the recession hit and he needed to support himself. He put his dream of furthering his education on hold and reluctantly enlisted in the military, where he worked for three years until he injured his back. He decided to apply to law school while recovering. But with a lacklustre undergrad GPA in the mid-threes out of four, Hopkins knew he would have a tough time getting in, so he went back and upgraded as many courses as possible until he ended up with a 3.7.

A few weeks before the 2011 law school year started, Hopkins had been rejected by every university he applied to and had pretty much given up hope. Then he got a call from Western University saying he got in. He was thrilled, a feeling that quickly wore off after classes began. “That first year was tough, and I don’t think I was prepared for the insanity of it all,” he said. His grades were barely above average and he didn’t get offered any summer jobs after first and second year. At that point, he considered cutting his losses and dropping out. “But I said to myself that I had to finish this. I knew I could be a good lawyer.” In his final year, he considered backup careers after he failed to get an articling position. Then he heard about the new law practice program (LPP), the first program of its kind in North America to offer an alternative for law graduates who can’t get traditional articling positions. It’s offered in English at Toronto’s Ryerson University and in French at the University of Ottawa. Instead of articling for 10 months, candidates undertake four months of classroom training and a four-month work placement. Hopkins graduated from Western law this spring and started Ryerson’s inaugural LPP in August. He’s looking forward to opening his own criminal law practice in Barrie, Ont., next year. “It’s an opportunity for me to get my licence, and take my imperfect academic record and the fact I don’t have many contacts in the legal world and still get to where I need to go,” he said.

Related: Law school in Canada: what will it cost?

The LPP will give hundreds of students like Hopkins the opportunity to get called to the bar. While it doesn’t replace the traditional articling regime, it represents a new era by turning a core tenet of legal education in Canada on its head. The controversial idea was born as a solution to Ontario’s “articling crisis,” which has given rise to a sizable number of law students without articling positions who are at a standstill in their legal careers. Many even abandoned law altogether because of it. In 2012, a Law Society of Upper Canada task force found that as many as 263, or 15 per cent, of Ontario’s roughly 1,750 law graduates would be without articling positions, up almost six per cent from March 2008—due in part to increased enrolment in law schools outpacing market demand forn articling students. The task force’s final report in October 2012 deemed Ontario’s existing articling program “unable to meet the ever-increasing demand for article placements.” After heated debates—with four members arguing that articling be abolished altogether—the majority approved the LPP for five years alongside traditional articling, which will also be subjected to enhanced oversight and evaluation. The law society also approved a new law program at Canada’s newest law school, Lakehead University. Like the LPP, the integrated practice curriculum at Lakehead in Thunder Bay, Ont., mimics legal practice, but incorporates it into law school from day one by adding more class hours. Students will graduate with a J.D. (juris doctor) in three years without having to take the extra year to article or do the LPP, because they will have already completed the in-class content and work placement.

The LPP delivers most of its content through online simulations, with small groups of students working together in virtual firms led by mentors. They are given tasks and simulated client files and are taught basic skills such as conflict checks and docketing. This means students can work from a distance, a set-up that’s ideal for Eric Hill, a single father living in Halifax who shares custody of his two children. He’s been an officer in the Canadian military for 25 years and did his law degree part-time at Dalhousie University, hoping to practise in the private sector. But by the time he graduated in 2010, he hadn’t secured an articling position and thought he would never practise. This fall, he started classes at Ryerson’s LPP, in which he will participate remotely. “It felt like this program had been conceived for my problem,” he said. “It makes access to a law licence neutral, and it gives you access to the legal profession without having to be chosen.”

Because the LPP is covered by the $4,860 licensing fee law graduates paid in 2014 to the Law Society, it gives boutique firms and sole practitioners a new chance to train students, something that was traditionally left to the megafirms in big cities that can afford to pay articling students’ salaries, which can range from $35,000 to $70,000. This is ideal for people who may want to set up their own practice, or work in areas such as family and criminal law, which doesn’t make up a large portion of these firms’ portfolios.

The ability to send candidates into these new environments also increases the legal presence in non-urban communities with a dwindling or greying population of lawyers. Anne Levesque, coordinator of U of Ottawa’s LPP, says it is a golden opportunity to train lawyers to fill gaps in services for francophones. “When there are different facets of your life that you can’t live in French, that chips away at the francophone community,” Levesque said. “Being able to speak to a lawyer about your problems in your mother tongue is part of normalizing the language and valuing the language.”

Lakehead University’s law school was founded in 2013 to promote justice in Ontario’s north. “Many firms in smaller centres can’t attract an articling student, or it’s too much of a burden on them, and we’re addressing that particular concern directly,” said Lee Steusser, Lakehead’s dean of law. In three years, 60 students now entering Lakehead University’s J.D. program will graduate ready to practise; they could be hired as associates immediately. Steusser feels Canadian law schools have become too focused on legal theory rather than practice, putting grads at a disadvantage. “We are a professional school in the full sense of the word, and we don’t shy away from that,” he said. “I don’t think the status quo is acceptable these days, and I hope students would demand more for the amount of money they are putting into their programs.”

Like conventional articling, these programs aren’t perfect. There are concerns over whether enough placements will exist and that these programs might create a two-tier system in which law students who didn’t go the conventional articling route might be stigmatized and have difficulty finding a permanent position. But these students are used to obstacles and naysayers. “Unfortunately for them, I’m still here and I’m still coming to compete. I think many of us are here to prove ourselves, to show we have what it takes,” said Hopkins.