Why universities are hiring 'Wikipedeans-in-Residence'

The online resource isn't going away. So schools are trying to help students make the best use of it. 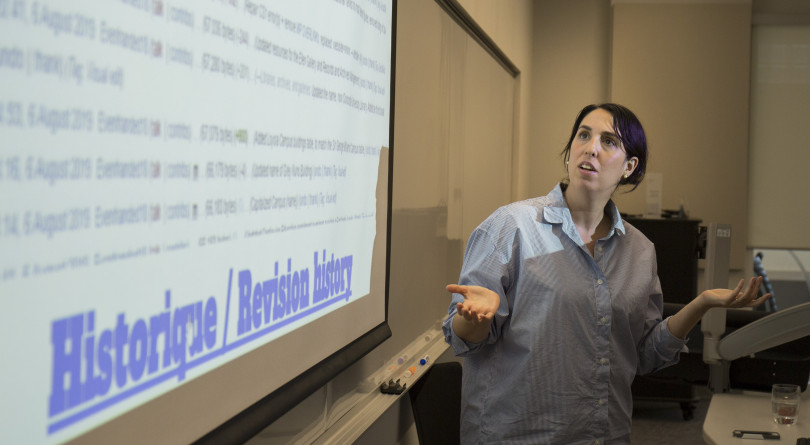 Berson leads a workshop about Wikipedia at Concordia. Students learn to read and edit Wikipedia pages and uncover contributors’ biases.(Photograph by Nasuna Stuart-Ulin)

Around 2007, when University of Windsor librarian Heidi Jacobs started to teach students about information literacy, professors would often ask her if she would please come to their classrooms and tell the students why they shouldn’t ever use Wikipedia.

The crowd-sourced online encyclopedia was only a few years old at the time, and academics had no shortage of worries: Wikipedia posts weren’t written by experts and some were riddled with errors. And even if a post was factually accurate, who was to say someone wouldn’t just change it the next day and add some mistakes?

But it didn’t take long until Jacobs realized that dismissing the platform outright wasn’t the best way for universities to treat a website students refused to ignore. “Professors started to realize that Wikipedia is not going away,” says Jacobs. “What we needed to do was start thinking critically about Wikipedia and work to make it better rather than just say ‘don’t use it.’ ”

She couldn’t have predicted what the next decade would hold. As part of a nearly complete about-face within academia, last year, Jacobs helped launch the initiative that saw her university hire a “Wikipedian-in-residence”—someone who would act as a resource for students to think more deeply about the platform, but also learn how they could contribute to Wikipedia edits.

It’s a job title that has sprouted up at several Canadian universities in recent years. The University of Toronto hired its first Wikipedian-in-residence in 2018, and Montreal’s Concordia University hired one this summer.

“I heard from a couple people who thought it was a joke—until the university made an official statement,” says Amber Berson, of her part-time role as Concordia’s newly placed Wikipedian-in-Residence. Berson is a Ph.D. student and Canadian coordinator for the Art + Feminism project, which works to add more content about female artists on Wikipedia. “They thought this was a hoax and were hostile to the idea.”

Berson’s role at Concordia is not to make additions or edits to bolster the university’s Wikipedia pages.  Instead, it is to offer workshops for interested students to learn how to read and edit Wikipedia pages, as well as to hold talks on systemic biases prevalent on the website, including its problem with gender bias. This long-standing issue came to the forefront last year when University of Waterloo professor Donna Strickland won a Nobel prize for physics—the first female physicist to win the prestigious award since 1963. Not only did Strickland have no Wikipedia profile at the time of her Nobel announcement, it was uncovered that a moderator had previously rejected a submission for an entry on Strickland because, prior to her Nobel, her achievements weren’t deemed significant enough. (Her male colleague Gérard Mourou, who won the 2018 Nobel prize for physics alongside Strickland, has had a Wikipedia profile since 2005.)

When Jacobs asked students at the University of Windsor to work on an assignment that involved editing or creating new Wikipedia entries, one group discovered that the site had more coverage about a single afternoon-long battle in World War II than it did for all involvement by Canadian women in both world wars.

RELATED: How to help students in distress

“These undergrad students, who’ve done courses on World War II, would go in and make changes, but one guy kept overriding their changes,” Jacobs says. The moderator making the changes didn’t have a history degree, but because he had done more than 20,000 edits on the site, he had more authority. “That was really interesting to them,” says Jacobs, “to learn the darker side of Wikipedia.” The students had to explain the rationale of their edits to this moderator to help them go through.

Other students tried to highlight potential pitfalls of the platform. One of Jacobs’s students managed to successfully sneak incorrect facts past a moderator by sourcing a made-up scholarly article, which gave the student’s edits the illusion of accuracy.

Newcomers to Wikipedia may not understand that discussion about what gets added or deleted from entries isn’t done behind closed doors. Rather, it happens on the publicly accessible “notes” pages of each entry—where volunteers will discuss edits and have open discussions on whether changes should go forward or not.

Editing Wikipedia pages helps users understand just how malleable knowledge is, says Alex Jung, the University of Toronto’s Wikipedian-in-residence. If someone makes substantive edits to an entry, “someone who visited the page today will have an entirely different idea of the topic than someone who visited it yesterday. Knowledge is fluctuating all the time.”

Todd Pettigrew has no problem with students talking about engaging critically with Wikipedia, nor does he oppose students using it to get initial background on a subject. But the Cape Breton University English professor is more critical of students learning to create content for Wikipedia, especially if that’s part of their coursework.

RELATED: What to study to land one of Canada’s 10 best jobs

Pettigrew wants his students to think more deeply in their studies by taking a position on a controversial subject, researching the facts and ethical implications, and forming a conclusion—stuff Wikipedia entries would shy away from in their quest for neutrality.

“I worry a bit about a [Wikipedian-in-residence] position if the emphasis becomes too much on how to package knowledge [to make it] accessible to people,” he says. “If we’re pushing students to be packagers of knowledge, I think we’re setting the bar too low.”

But Jacobs argues that teaching students about the types of discussions happening within Wikipedia, and how to write entries, “is a great opportunity for students to practise being a historian in the public world.”

Academics might differ on the role Wikipedia can play in school, but there is consensus on one rule students should follow, something echoed by Wikipedia co-founder Jimmy Wales years ago: “For God’s sake, you’re in university; don’t cite the encyclopedia.”

This article appears in print in the 2020 University Rankings issue of Maclean’s magazine with the headline, “A scholarly pursuit?” Order a copy of the issue here or subscribe to the monthly print magazine here.