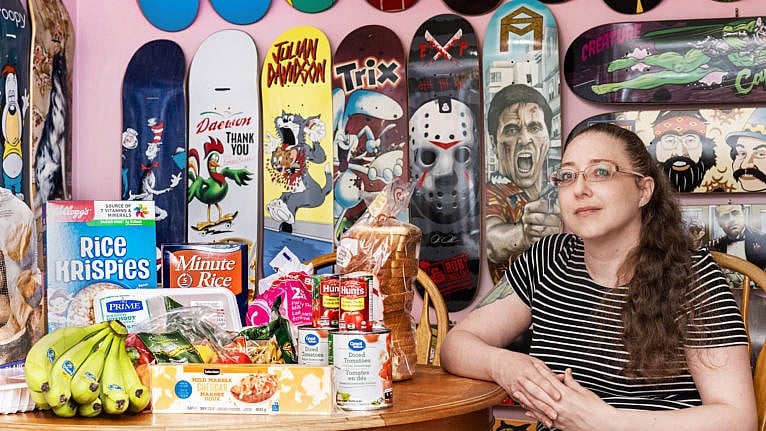 With the rising costs of nearly everything, Canadians are particularly feeling the pinch when it comes to rising food costs across the country, further fuelling a food insecurity crisis being experienced by many throughout the nation. Here, Yvonne Alabaster, a former chef and now on disability support in Toronto discusses how she gets by:

I spent two decades working as a chef for places like the Intercontinental Hotel Group, Chili’s and Cora. I have fibromyalgia, rapid-onset migraines and a condition called hidradenitis suppurativa, which leaves open wounds on my skin. In 2017, my symptoms got so bad that I went on disability. I now receive $1,500 each month. I live with a roommate in a huge two-bedroom apartment in Toronto’s east end. It’s fairly affordable because my roommate’s mother lived there for 20 years before she died. I pay $625 a month in rent and buy groceries; my roommate pays for cable and internet.

I’m lactose-intolerant and gluten-sensitive, but I can no longer afford to buy lactose-free milk and cheese or gluten-free pasta. I’ve started buying regular milk and gluten pasta because it’s cheaper. I try to eat it in small amounts. It’s not great when I sit down to eat a bowl of pasta I know is going to aggravate my skin and hurt my stomach. But I have to eat.

I only have around $5 per day to spend on food. I’m sticking to one meal a day—I eat bread and peanut butter to keep my body from going into starvation mode. Occasionally I break down and have a can of soup at lunch. I’m always tired.

Many of the sales in Toronto start on Thursdays, so I look up the flyers on Wednesdays and compare what’s on sale that day and what’s on sale the next so I know when to run out to the store. This week I went to Food Basics and bought a loaf of bread, a bag of peppers, and canned tomatoes, which I will use to make a giant pot of pasta sauce that will last me the month. There was a good deal on ground beef—$4 a pound—so I bought three pounds and froze some. I also got five decent-sized chicken breasts for $12. Because I found meat on sale, I was able to buy bananas at 69 cents a pound, which made me really happy because I can rarely afford fruit anymore. I also bought bags of frozen peas and corn. I always buy the one-kilogram bags, but I’ve noticed they’re only 750 grams now even though the price has stayed the same. When did that change?

I’m luckier than a lot of people in my situation: I was a chef for two decades, so I can buy a pork tenderloin and cut that into a week’s worth of chops. Recently I’ve been watching a lot of YouTube videos on container gardening. I think food costs are only going to get worse, so I’m going to try my hand at planting a garden on my balcony next year. I’d like to grow tomatoes and can them so I can cut down on that cost, as well as strawberries and raspberries, so I can enjoy fruit again. — As told to Andrea Yu