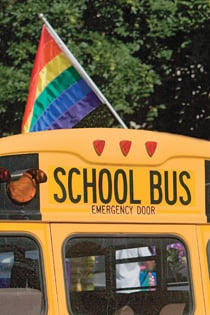 A think tank representing Ontario’s publicly funded Catholic school boards coined the euphemism of the century recently when it proposed that gay-straight alliance (GSA) clubs operate under a hopelessly vague designation: “Respecting Differences.” You can just see it in lights: the clubs’ mission statements, and the Catholic boards’ iconoclastic revision to Emma Lazarus’s legendary sonnet: “Give me your tired, your poor, your huddled masses yearning to break free . . . oh yeah, also your gay, bisexual, transgendered . . . anyone with acne.” Alas, that won’t happen, because in addition to the name change, the proposal has also stipulated that gay kids (sorry, different kids) can’t talk about being gay. Perhaps “Ignoring Differences” would have been a more apt suggestion, because it’s obvious that Ontario’s separate school system is keen on treating homosexuality as an adolescent affliction like any other (bad breath, body odour) and the most humane way to deal with such an affliction is, of course, to sit a safe distance from the person who has it: i.e., to ignore it. Or, in the words of Ontario’s Catholic school boards, respect it. As one of the afflicted myself, I try to avoid the phrase, but “Respecting Differences”? That is so gay.

In another context, though, it’s oddly progressive. Take a look at the rest of Canada’s partially publicly funded faith-based schools (namely in Alberta, Manitoba and British Columbia), and it’s clear that LGBT students in Ontario’s Catholic system fare better than their peers elsewhere when it comes to starting GSAs (or “difference” clubs). At least in Ontario the debate isn’t silenced before it gets too loud. In Manitoba, for example, which partially funds religious schools of all stripes, there is no provincial law requiring the independent schools to accommodate gay-straight alliance clubs. In addition, every religious independent public school operates, in large part, as its own school district—which makes it more difficult for students to lobby together at the provincial level.

Something similar operates in British Columbia’s partially funded independent Catholic schools, where the basic garden-variety student councils have been deemed an acceptable alternative to gay-straight alliances. In December of last year, Doug Lauson, the president of the Federation of Independent Schools Association of B.C. (and a superintendent of Catholic independent schools there), told the Vancouver Sun that as far as he was concerned, gay-straight alliances weren’t essential because student councils could protect student rights. “We would be 100 per cent behind a policy or legistation,” said Lauson, “that was against all forms of bullying. But to emphasize one form of bullying would be problematic.” In other words, to zero in on one group of victims, according to the B.C. Catholic system, is to unfairly elevate one group over another. Ergo, the “Respect for Life” club, at St. Thomas Aquinas Regional Secondary School in North Vancouver, which emphasizes the victimization of the unborn, would be anathema to superintendent Lauson, too. Or maybe not.

But it’s only by comparison that Ontario’s separate system looks “liberal.” Its ill treatment of both its gay students and staff (I can’t imagine it would be easy for an openly gay teacher or administrator to advance professionally within the Catholic system) is only one of many problems the Catholic boards’ religious self-interest causes the rest of Ontario’s public schools. An equally messy problem, one that Alan Borovoy as general counsel of the Canadian Civil Liberties Union lobbied against, is that subsidized religious education muddies the values of secular public education. After all, how can the loudly non-denominational Toronto District School Board tell one of its schools to forbid a Muslim prayer room on the grounds of separation of church and state, when there exists, in its province already, a publicly subsidized institution that binds church and state together? And how can board officials tell public alternative schools to tone down their anti-Zionist/Israeli apartheid rhetoric on the grounds of inclusivity, when there exists in their province already a publicly funded institution that refuses to include an entire group of people because of their sexuality?

I am in no way arguing that religious discrimination and homophobia are one and the same, only that when you tolerate intolerance in one specific state-funded institution (regardless of its constitutional legitimacy), you have to tolerate it in every institution.

And frankly, that isn’t something I want to pay for.