REVIEW: In my time 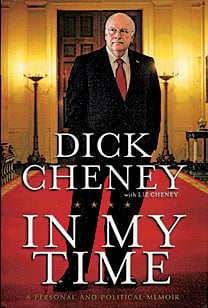 Cheney’s unapologetic memoir, which stretches from a modest childhood in Nebraska and Wyoming to his rise as the most powerful vice-president in history, saves its emotional energy for settling scores, especially against fellow members of the administration of George W. Bush. (One of the few tidbits he does reveal: the secure “undisclosed location” to which he was so often consigned after 9/11 was not some cave bunker but often his own home or the woodsy presidential retreat of Camp David.) On policy, Cheney has few regrets. “One of the most significant accomplishments” of Bush’s presidency, he writes, was “the liberation of Iraq and the establishment of a true democracy in the Arab world.”

The book describes Cheney’s outsized influence in the first Bush term and increasing marginalization in the second. While he successfully pushed for the invasion of Iraq in 2003, by the summer of 2007 he could not persuade Bush to bomb a Syrian nuclear reactor. “After I finished, the president asked, ‘Does anyone here agree with the vice president?’ Not a single hand went up around the room.” Cheney saves his harshest words for Bush’s two secretaries of state. He accuses Condoleezza Rice of misleading Bush while fumbling disarmament talks with North Korea (“We were promising rewards for their duplicity”) and naively seeking diplomatic engagement with villains. “In meeting after meeting, it seemed we had to argue against yet another misguided approach from the State Department.” And Colin Powell is painted as a disloyal colleague who criticizes Bush’s policies to others but not to the president’s face.

The world according to Cheney is dangerous and needs American power. When defence secretary Robert Gates tells the Saudis in late 2007 that Bush would be impeached if he took military action against Iran’s nuclear program, Cheney is livid: Gates “removed a key element of our leverage.” But Cheney’s will not be the last word. Rice’s political memoir is due out Nov. 1.